You know—as your multitasking wine, food & tennis columnist here at CV Weekly, there was no way we’d pass-up commenting on the all-Italian 2015 U.S. Open Women’s Championship held this past weekend, and of course while we’re at it, enjoying some tasty Italian wine.

Not only tennis fans, but sports fans around the country were primed to watch the amazing Serena Williams’ quest to win all four Gram Slam events in one calendar year—only an elite few have ever done so in tennis history.

You’ll of course remember my “interview” with Serena in these pages during the 2015 BNP Paribas Tennis Tournament held at the Indian Wells Tennis Garden this past March.  And although she had to “pull out” of that event, even John McEnroe agreed with me that Serena is history’s best women tennis player. And she was taking down all comers around the globe this year; however, her winning momentum was stymied by the unsuspecting and un-seeded 32 year old Italian Roberta Vinci who won the three set semi-final match before a shocked spectator New York crowd.

While on the other side of the draw, Italian Flavia Pennetta, seeded 26th at the tournament, defeated the 2nd seed Ramona Halep to force the first All-Italian final in U.S. Open history. ALLORA!!  Things got so wild over in Italy with the sports news that the Prime Minister, Matteo Renzi and his entourage cancelled their government schedule and booked a jet immediately to NYC to be on hand to watch the match and congratulate the inevitable Italian champion at Arthur Ashe Stadium—the largest tennis arena in the world.

Pennetta won the final in two sets, but as one would expect with the Italians, both women were as happy as pizza pie, hugging each other, praising each other and sharing tears of joy in front of the tennis world—something we don’t see enough of in the cold fierce competitive realm of women’s tennis.  Complimenti ragazze! Flavia e Roberta—Regole Italia!

Well—no one was letting this festa d’Italia go on without sharing in the celebration of those headed for New York’s lower Manhattan’s Little Italy, to wine and dine and Party!  Back home here in the desert, I myself was almost brought to tears when my lovely wife Penny and my son Paolo prepared & presented a home abbondanza of the most delicious Italian dishes one could imagine including a spicy sausage & mushroom Rotini Bolognese, zucchini lasagna, Italian parsley polenta, and the freshest tossed giardino insalata italiano.  La vita è buono! Lode a Dio!

I scurried to the wine bin and grabbed some lip-smacking vino to match the glorious meal.  For certain, we’ll no doubt spend some autumn time with our annual Chianti article, but at this junction, let’s talk about some other wonderful Italian red for the dinner meal.

Perfect for pairing with classic Italian dishes are two wines described below from the Avignonesi Winery and Vineyards which is located near Montepulciano in southern Tuscany.  As with Chianti wine, the reds from this area are also produced from the Sangiovese grape—which is becoming one of the most popular Italian grapes for the American palate.  And why not—characteristic flavors of the Sangiovese include: cherries, earth, chocolate, anise, coffee, herbs, leather, plums spices, tabacco, tea, violets, and of course, sanguine notes.  After all, “sangiovese” is latin for “the blood of Jupiter”.

Italy’s oldest DOCG red wine has been a long overlooked Tuscan appellation, but Avignonesi owner Virginie Saverys, originally from Belgium and a fortunate retired lawyer, has brought in an international team and a breath of fresh air to this classic region since fully acquiring the winery in 2009. Virginie’s passion for organic and natural products drove her to implement 100% organic and biodynamic practices at the winery, which, coupled with a detailed geographical study of Avignonesi’s soils, uncovered the true terroir of the vineyards.

Wanting to focus on revealing the full potential of Montepulciano, Virginie was inspired to craft a beautifully singular Vino Nobile made from 100% Sangiovese where only 70% is required. Virginie who has elevated this wine to a level on par with the more expensive neighboring Brunellos. 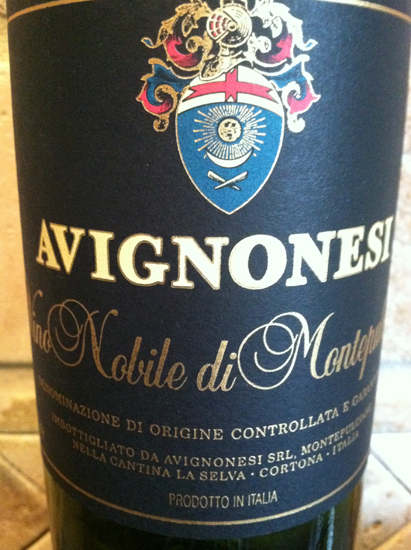 The Avignonesi Vino Nobile di Montepulciano 2011, at around $25, which received a score of 91 from Wine Spectator, is fresh and elegant, with “An opulent style, featuring black cherry, red fruit, plum, earth and Mediterranean shrubs and sweet spices. Full and complex, offering fine balance and a lingering aftertaste of tobacco, spice, balsamic and peak-mineral (ie. ‘blood’ ) notes.”

The other Avignonesi red we enjoyed, was the Vino Nobile’s little brother—so to speak—the Rosso di Montepulciano, around $18.  This wine is quite similar but has less age in the barrel and therefore even more reasonably priced.  It was great to have both wines at the table for comparisons.

Medium ruby red in color, the Rosso is bursting with bright aromas of strawberry, raspberry and pomegranate. Notes of violets and rose petals complement the flavors of cherry, red currant and white pepper. A delicate finish of sage and thyme lingers on the tongue.

The winemaker notes include, “The 2014 was a weird year in Tuscany—as our normal, warm and sunny summer never really came. This, however, favored our young red wines, which show lots of bright, red fruit and fragrant flavors, which are more difficult to maintain in warmer years. This wine is best served slightly chilled.”  Sounds perfect in the desert!—we’ll drink to that!