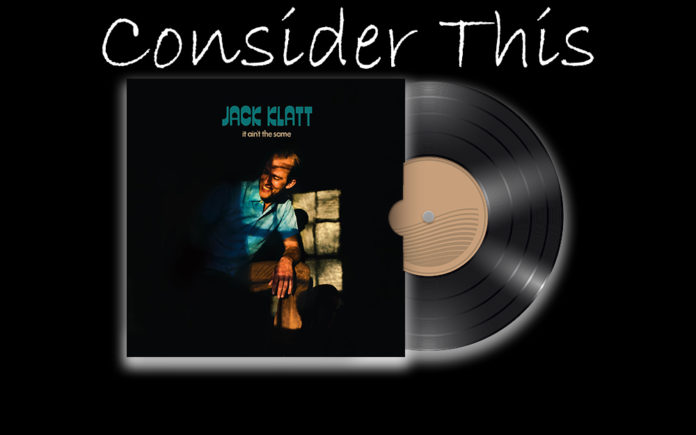 If you have been tuning in to PBS to watch Ken Burns’ “Country Music” documentary, you might be getting acquainted (or reacquainted as the case may be), with legendary vocalists like Hank Williams, Sr. Lefty Frizzell, George Jones, Marty Robbins and Glen Campbell. Those gentlemen invested their whole heart and soul into each lyric, these days, that’s something of a lost art. Happily, that tradition has been revived by Jack Klatt.

Born and raised in Minneapolis, Minnesota, Jack’s path to the kind of music he makes today took a circuitous route. Obsessed with Punk Rock and primitive progenitors like Eddie Cochrane and Elvis Presley’s guitarist, Scotty Moore, he formed his first bands in Junior high. Enamored with Rancid and Social Distortion, he began exploring their musical Influences. Soon, he was soaking up the Clash’s oeuvre, which led him to Bob Marley and Woody Guthrie. Once he familiarized himself with the Dust Bowl Troubadour, that sent him down a musical rabbit hole that included Country, Blues, Jug Band music, Ragtime, Jazz and Folk.

Jack had a few peripatetic years, backpacking throughout America, and later Spain and Italy. He earned his keep busking, playing music on the street for tips and donations. Aside from keeping him fed, busking also honed his skills and he began creating his own style. Harnessing his influences and then sort of letting them go, allowed him to write his own music.

When he returned to Minnesota, he reconnected with the thriving music scene of his hometown. Next, he put together a band and began playing the Folk circuit and festivals. His debut, Love Me Lonely arrived in 2013, three years later he followed up with Shadows In The Sunset. Both independently released albums received glowing reviews in publications like No Depression and Americana Roots UK. He was invited on tour with local favorites, Cactus Blossoms, and then came to the attention of Yep Roc Records. He signed with them in early 2019.

Established in 1997, the eclectic roster of the North Carolina label runs the gamut from Roots Rocker Dave Alvin, to British Punk progenitor, Paul Weller. It’s become something of a haven for Post-Punkers like Gang Of Four, and Bob Mould, eccentric singer-songwriters like Robyn Hitchcock and Nick Lowe, as well as alt.country stalwarts like Rodney Crowell, John Doe, and Kim Richey. Adding Jack Klatt seemed like a no-brainer. His third album and first for Yep Roc, It Ain’t The Same, has just landed in record stores.

The album opens on a tentative note with “I’ll Never Let You Down.” Shuddery piano figures connect with a chunky backbeat, feathery acoustic guitar, weepy pedal steel and Jack’s rich vocals which shift from sturdy to keening. The lyrics detail the scary sensation of falling in love and revealing those feelings; “Afraid to fall, take a chance and surrender to a brand new dance.” A Smoky harmonica solo succeeds in bringing it all back home.

A couple of songs, “World Shaker” and “Ramblin’ Kind” perfectly limn the yin and yang of Honky-Tonk music. The former is a twangy two-step powered by piquant mandolin, sprightly keys, prowling bass, reverb-drenched guitars and a kick-drum rhythm. The jaunty melody and instrumentation belie lyrics that paint a portrait of a desperate woman taking control of her own destiny; “Caught in a cycle, trapped in a dream, she never meant to be nobody’s queen…she’s got the ragtop down, her foot’s on the floor, the breeze that’s blowing, you never felt before/Time’s broken and it’s moving fast, running restless from a troubled past, she’s a world shaker, and nothing’s going to break her.”

The latter mines a lovesick and lonesome feel pioneered by antecedents like Hank Sr., George Jones and Merle Haggard. Acoustic, electric and baritone guitars intertwine over searing pedal steel, grumbling bass, rippling percussion and a tick-tock beat. In a 21st century twist, the lyrics offer something of an internal Pep-talk; “You’re empty, it’s time that you woke up, rise and fill your cup/ No need to hide, go on and kill your pride let the outlaw ride.” At the close of the track, lonesome pedal steel and loping acoustic riffs ride off into the sunset together.

The best songs here blur the lines between Country and Folk. “Caught In The Middle” is a dusty dirge anchored by gritty acoustic riffs, stinging electric licks, sinewy bass, smoldering pedal steel, and a bass drum kick. Split between sin and salvation, the message here suggests that sitting on the fence is more shameful than taking a stand. Apathy is easier than action. Lyrics like “Who is that clown speaking only in riddles, words have a way that can hypnotize, he ain’t saying nothing, he’s telling you lies” and “A new king is on the throne, the enemy is getting bolder, and I just can’t take it,” obliquely speak truth to (orange, spray-tanned) power.

“Tinted In Blue” weds a clattery beat to jangly guitars, angular bass and a wash of keys. The sunshiny shimmer of the melody and instrumentation nearly camouflages the sad-sack story of a heartbroken guy who can no longer enjoy life’s simpler pleasures; “A silhouette beneath the clouds, I’ve been hiding like a mole in the ground/Forever lost and forever found, and if I can’t swim, I guess I’m gonna drown.” Even a lickety-split guitar solo on the break can’t assuage the sadness.

Conversely, “Tomorrow” is something of an unrepentant Outlaw’s lament that doesn’t traffic in regret. Thrush acoustic guitar, sounds, to quote John Hiatt, like it’s being filtered through “a vibro-lux turned up to ten.” Partnering with rambling electric riffs, upright bass and shaded pedal steel, the tune is tethered to a clip-clop beat. Jack’s warm tenor is the devil on your shoulder, insisting “Tomorrow is for those that have fallen asleep.” He’s in it for what he calls “the holy now.”

Even more persuasive is the insistent shimmy of “Prove My Love.” anchored by a relax-fit Bo Diddly Beat, electric, acoustic and 12-string guitars collide with wily bass lines. It’s a hooky rave-up that recalls other ‘50s touchstones like Buddy Holly and the Everly Brothers. Jack’s playful mien matches the song’s swagger as he predicts “a change is coming, you wait and see, you never met a man quite like me.”

Finally, the title track (ironically, the only song Jack didn’t write), is a tender Cowpoke shuffle propelled by cascading guitar notes, quicksilver organ colors and a clipped rhythm. The song, written by John James Tourville, shares some musical DNA with the classic Rick Nelson/Dean Martin duet, “My Rifle, My Pony And Me,” cloaking it in a Wild West patina.

Other interesting tracks include the high lonesome ache of “Looking For Love” and “Highway Lines” which chronicles the bleary-eyed disconnect of life on the road. Here rumbly guitars and willowy pedal steel conjure up the desired narcoleptic effect. The album closes with Jack revisiting “Love Me Lonely,” the title track from his debut.

Originally a bare-bones affair that featured just vocals and acoustic guitar, this rendition is fully fleshed out.  The vocals remain front and center, but now they lattice over acoustic and baritone guitars, bass, mandolin, gospel-tinged backing vocals and drums. He is suitably Dylanesque when he offers a back-handed compliment to a not-too-clingy girlfriend; “My love speaks through cigarettes, her life folds in a trunk, she don’t heed to church bells, cuz time given is enough/If I’m to be a’ leaving, she don’t wonder why, just holds me while she has me, never says goodbye.” But later there’s a moment of tender reflection over shivery slivers of mandolin; “Nothin’ is forever, the journey’s never done, moments move like Hummingbirds and the earth circles the sun/When you find yourself sleeping ‘neath the stars, just look on up and wonder exactly where you are.”

So much of this album exudes a retro charm, even the cover image feels  like a sideways homage to classic albums like Box Tops’ “Cry Like A Baby”  and Glen Campbell’s “Gentle On My Mind.” Still, the music never seems overly-curated or derivative. Much like Chris Isaak or James Hunter, Jack has distilled his influences and created his own heady brew.