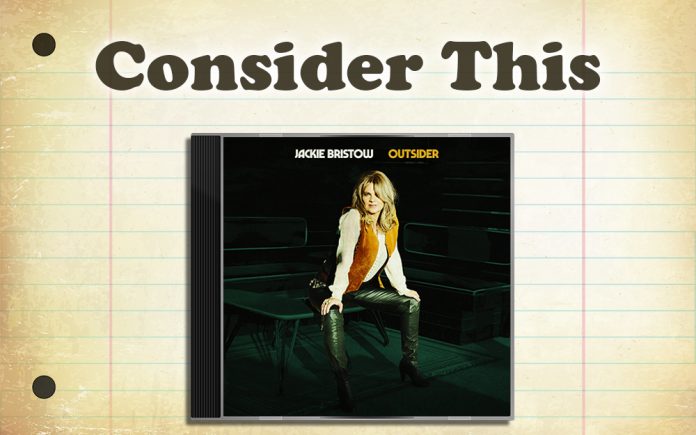 “I take the knocks, still got a lot of faith in me

I hit the rocks, but now I’m back on my feet,

That’s Jackie Bristow on a deep cut off her excellent new album, Outsider. If it were possible for Bobbie Gentry and Mirage-era Fleetwood Mac to create a musical love child, she might sound like Jackie.

The New Zealand native has been making music since she was a kid. In fact, she first made her bones playing Country covers with her sister Katrina, as the Bristow Sisters. By 2002 she embarked on a solo career, relocated to Los Angeles and recorded her debut, Thirsty, with renown musician/producer Larry Klein. Over the last two decades, she has released critically acclaimed records like Crazy Love (2007), Freedom (2010), Shot Of Gold (2015) and Blue Moon Rising (2020). But it’s her latest effort, Outsider, that finds her standing on the precipice of greatness.

The album opens with the one-two punch of “Livin’ For Love” and “Shakin My Bones.” “Livin’…” opens tentatively with loopy percussion and flirty banjo notes that are quickly supplanted by stacked vocals which form a majestic Wall Of Sound. Gritty guitar licks wash over thrumming bass, dusty Hammond B3 colors and a piledriving beat. Jackie’s rich contralto sails above the fray as lyrics proselytize and prioritize love over lucre; “Are you livin’ for love, or livin’ for the money, chasin’ the honey, oh, oh.” Throwing down the philosophical gauntlet on the verse, she asks “do you ever question the emptiness you feel inside, was it worth the sacrifice you made to build this lie?” A growly guitar solo on the break mirrors her resolve. “Shakin’ My Bones” is the record’s first single, inspired by a Joshua Tree dust storm she experienced firsthand. Airy acoustic notes connect with arid electric riffs, bone-dry bass lines, brittle banjo and a snap-crackle-shuffle beat that feels as desolate as a haboob at the edge of the Mojave and Colorado deserts. Vivid lyrics like “Everyone run for cover, watch the dust settle, it feels so smoky in the wind, but it’s so peaceful,” captures the quixotic nature of the desert. A chimerical guitar solo unfurls on the break, underscoring this musical mirage.

Although Jackie grew up in the tiny town of Gore, New Zealand, she has since become a citizen of the world, having spent time in Sydney, Los Angeles and Austin. She currently calls Nashville home. Several tracks were influenced by the Southern fried sound that gives Music City it’s flavor. Take “Rockin’ Chair” which blends searing pedal steel, crooked banjo notes, ringing guitars, wily bass and a tick-tock beat. The melody and instrumentation land somewhere between a dreamy Shoegaze soundscape and a South Of The Border groove. Contemplative lyrics like “And then I sit here quietly, the dreams fall from the trees, there is magic in the wind, it’s a gentle peaceful feeling, giving me some healing…I’m dreaming I’m believing, watching colors change, falling and floating, you’re calling out my name,” are matched by a courtly Spanish guitar solo on the break.

Then there’s the shimmery title-track. Willowy acoustic riffs wrap around lonesome pedal steel, darting keys, angular bass, a sturdy backbeat and percolating percussive loops. Penetrating lyrics speak to the eternal disconnect; “I’m always on the outside of the in-crowd, outsider, never on the inside with the hip crowd, outsider, I’m an outsider.” The tart melody and sanguine arrangement makes up for the lyrical diffidence. All insecurities recede when a muscular guitar solo flexes across the instrumental break.

Meanwhile, on “Without You,” Jackie’s deceptively girlish vocals are cocooned in jangly acoustic guitars, stickity electric riffs, prickly banjo notes, tensile bass lines, a pulsating string section and kickdrum beat. Her voice is suffused in longing as she offers up a simple declaration of love; “Cause I’ve been struck by love, it went straight to the heart, and it makes no sense and I have no defense/But the world I know would lose its color, without you.” The ache is accentuated on the break with a plaintive pedal steel solo, then tempo accelerates as sawing strings bring the song to a breathless crescendo.

Somehow, the best tracks land dead center, the action slows on both “Fool For You” and “Surrender.” The former is equal parts Torch and Twang, powered by delicate piano arpeggios, that are shaded by plangent acoustic licks, indignant electric riffs, prowling bass and a thwoking beat. Jackie’s vocals veer into Dusty Springfield territory as she confronts an unfaithful lover; You say it’s just a little fun, everything you want and need, and then you turn away and hide, leaving me high and dry and dial me down again.” As the arrangement gathers speed, stately piano notes drill down on every turn of phrase, every declaration of independence, before locking into a down-home Gospel groove. Sanctified backing vocals wrap around an epiphany of sorts; “You gotta be brave, gotta be strong, know what you want.”

The latter was produced by Bluegrass legend Viktor Krauss. Something of a slow-cooked lament, it finds Jackie searching for what Tenacious D. referred to as “Inspirado.” Cascading acoustic guitars lattice atop pensive electric guitar, a wall of synthesizers, lush Wurlitzer, a thrumming Upright bass, and quiescent drum machines. Initially she’s kicking against the pricks; “I’m trying to find the spark I need to light the fire, it simmers down deep in me, oh these burning embers,” by the end of the song, she realizes some things lie beyond our power; “No, I can’t control everything, life has its ups and its downs, oh let me float down this river, let me surrender.”

She also pays homage to a couple of geographical touchstones. Swirly Hammond B3, syncopated horns, flickering guitars and Gospel-inflected backing vocals coalesce into a slow-cooked Country-Soul gumbo on “Tennessee You Call Me Home.” Echoing the grit and grace of Al Green’s seminal Hi-Records hit, “Take Me To The River,” the song exhibits the same wanton urgency coupled with call-and-response backing vocals.

Finally, the Golden State gets a shout-out on “California.” Sun-dappled acoustic notes feather atop shadowy pedal steel and bouzouki, agile electric arpeggios, languid bass and a conga-fied beat. Not unlike Joni Mitchell 50 years ago, Jackie evinces an ambivalence for the place where she first made her mark; “The leaves are falling, I paid my dues in California I play the game, I feel the pain, I know my truth/Always hopeful I can dream in California, turn the table, I turn the spell, I’m waitin’ for ya.” A bottleneck guitar solo on the break underscores her equivocation.

Other interesting tracks include the jangly kick of the aforementioned “Never Too Late” and the feral fragility of “Wild Cat.” The album draws to a close with the anthemic “Easy Road.” Chiming guitars, gamboling banjos, and flinty bass lines are tethered to a galloping gait. Wry and introspective, the lyrics reflect on the circuitous path her career has taken; “I never took the easy road, oh, I’ve been traveling slow, and I begged, borrowed and stole just to find my way back home.” A Bluesy guitar solo threads through the instrumental break, reinforcing her hard-won wisdom.

Everything she has done before has led to Outsider. It’s a watershed record for Jackie Bristow, inspired by the American South and the musical melting pot that is Nashville. It delivers a smorgasbord of styles, hopscotching through Country, Soul, Folk and Rock & Roll, without ever breaking a sweat.