Back in the late ‘50s and early ‘60s, Bob Dylan found inspiration from American Folk music, in particular, Woody Guthrie. For the Beatles, it was the primitive Rock & Roll and the Rhythm & Blues emanating from America. The Rolling Stones were deeply influenced by the rural Blues birthed in the Mississippi delta and electrified in Chicago. When Jake Bugg had his first musical epiphany it happened while he was watching a “Simpsons” episode.

That’s how it goes for Millennials, inspiration comes from sources both weird and mundane. Skateboard videos, car commercials and computer games currently have a broader impact than records or radio. For Jake Bugg it was the “Simpsons” episode that focused on bullying and Astronomy, while Don McLean’s song, “Vincent,” (a paean to the 19th century painter), played in the background.

Jake Bugg was born Jake Edwin Charles Kennedy in Nottingham, England in 1994. His parents each had nascent careers in music and separated when Jake was quite young. He grew up on a council estate and began playing guitar at age 12, not long after the “Simpsons” episode aired.

Digging deeper as he began woodshedding, Jake drew inspiration from heavyweights like the Beatles, Jimi Hendrix, Donovan, Johnny Cash and the Everly Brothers, along with Britain’s biggest ‘90s band, Oasis. He dropped out of school at age 16 and adopted his dad’s surname, Bugg, as his stage name.

After playing a few local gigs, he submitted his own music to BBC Introducing, a program created to support new and unsigned musicians. In 2011, He was selected to play on the “BBC Introducing” stage at the venerable Glastonbury Festival. That exposure garnered him a contract with Mercury Records.

His self-titled debut arrived in late 2012 and critics immediately drew comparisons to a young Bob Dylan. Jake quickly brushed off the correlation, saying at this point, Metallica was a bigger inspiration. But it was easy to see the similarities; the same, chain-smoking, nervous energy, and an affinity for spare acoustic music that inspired by both young men. His album hit #1 on the British charts.

Following high profile tours opening for Lana Del Rey and Noel Gallagher (architect for Oasis’ sound), Jake retreated to Shangri-La studio to record his second effort. A world away from council flats, the Malibu studio is owned by Rick Rubin, one of the most influential producers on the planet.

Although he gracefully avoiding the dreaded sophomore slump, his second effort didn’t receive the same enthusiasm as his debut. Still, it shot to #3 on the British charts and #46 on the Billboard Top 200.

Quite suddenly, Jake experienced a bit of backlash for collaborating (on both albums) with ex-Snow Patrol-er Iain Archer and Jack White/Raconteurs cohort, Brendan Benson, as though co-writing songs made his success invalid. Following tour commitments he laid low for a bit. Mike D. of the Beastie Boys offered to produce some tracks, but the results were unsatisfactory, so Jake decided to go it alone. 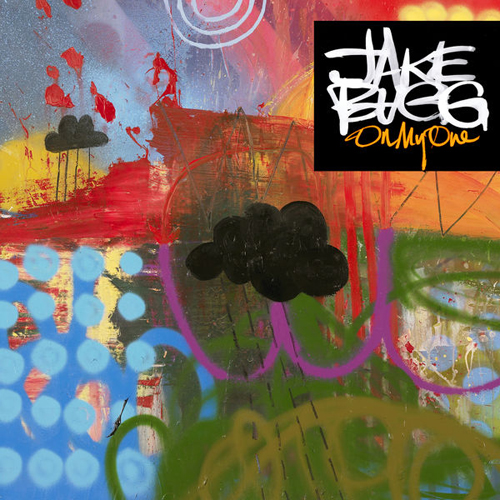 Nearly three years after Shangri-La dropped, Jake has returned with On My One. He considers it his make-or-break record. The first two tracks, “On My One” and “Gimme The Love” set the schizophrenic tone for the rest of the 11 song set.

Roiling acoustic guitar and snap-turtle snare drum beats accentuate the brooding title track. “On My One” is Nottingham slang for “on my own” and Jake does his best to convey not only the lonely isolation of life on road, but also the ephemeral quality of Pop Star success. “I’m just a poor boy from Nottingham, I had my dreams/ But in this world they’re gone they’re gone, Oh I’m so lonesome on my one.”

“Gimme…” is a stylistic 180, fusing strafing blasts of Telecaster riffs over acid-house rhythms that recall the Madchester music scene that gripped Great Britain in the late ‘80s. (Maybe Jake saw an obscure “Simpsons” episode devoted to the Stone Roses and Inspiral Carpets). The lyrics offer a glimpse into the creative process of trying to write a “hit” song; “Stick lies and rhymes about the old days, keep ‘em rich just to make new waves/I’ve thought about it in a few ways, full back tough on the pale blaze.”

And so it goes, Jake never wanted the “New Dylan” tag and here he gives himself permission to color outside those lines. Both “Never Want To Dance” and “Love, Hope And Misery” display an unexpected facility for Soul music. His vocals seem to be channeling both Al Green and Australia’s original boy band, the Brothers Gibb.

The former blends languid rhythms, sleek keys and peppery horns. The lyrics mine the rich “Baby, baby don’t get hooked on me” ethos pioneered by Mac Davis in the early ‘70s. “And I don’t know if I need ya, I know it might be cruel/And I don’t think that I love ya, I know I’m such fool.”

The latter sounds like the bastard child of the Black Keys and the Bee Gees. Stinging guitar licks collide with echo-y slapback bass, a tick-tock beat and soulful strings. Jake affects a rueful falsetto croon. His words of comfort don’t completely mollify, because, um, nature. “They say it comes in threes, love, hope and misery/ And the first two are wrong and tell me I am wrong, I hope that I am and you don’t hate me/Don’t be mad, I’m just a man, and I know that you must hate me.”

The album’s most ambitious songs, “Bitter Salt” and Ain’t No Rhyme” provide a one-two punch “Bitter…” is a Bluesy stomp, powered by a four-on-the-floor beat, shape-shifty guitars that ricochet, drone and jangle. Meanwhile, on “Ain’t…” Jake unleashes his inner MC. Over a kinetic rhythm and shang-a-lang guitars he unspools a cautionary tale of teenage rebellion and crime. He isn’t exactly rapping, but he spits his verses with authority.

Ultimately, the best tracks here hew more closely to the Folky template he created for his first two albums. The jaunty melody of “The Love You Were Hoping For” belies a lonely, Eleanor Rigby-esque portrait. “Put Out The Fire” is an infectious mash-up of Johnny Cash’s “Folsom Prison Blues” and “Bob Dylan’s 115th Dream.”

The Shaggy Dog saga of “Livin’ Up Country” is a ramshackle Country charmer. “All That” is a tender encomium to a brief romantic encounter that recalls long gone troubadours like Nick Drake and

Tim Buckley. The album closes with the swagger-y Blues shuffle “Hold On To You” that kind of just hits the spot.

On paper, this album shouldn’t really work. Stylistically, “On My One” is all over the map. On most of the tunes, Jake plays all the instruments himself, and also handles production, with a bit of assistance from Jacknife Lee, (R.E.M., the Cars, U2).

Really, this record charts the progress of a kid who’s gone from a scrubby council flat in Nottingham to the posh surroundings of Notting Hill. It may not be perfect, but it definitely feels authentic. Clearly, Jake Bugg is just getting started.