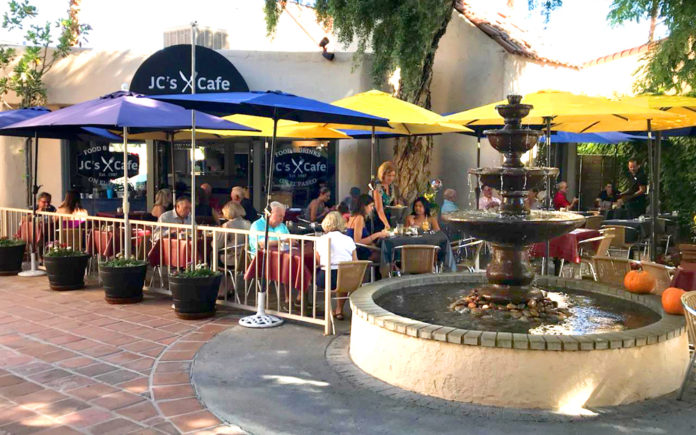 The quaint and cozy JC’s Patio Cafe on El Paseo in Palm Desert has been rebooted with an updated bar and décor, gently adding to the charm they are famous for.

“Michelle took the first swing at the bar,” said Casey Hutchinson of his wife and business partner, referring to the demolition of the bar on the road to remodeling. The couple decided to spruce up their bar at JC’s Patio Café, and closed for the month of August to do so. The seasoned restauranteurs purchased the restaurant in late 2016, and after transitioning from the previous owners, they have made strides to make the long standing establishment their own in many ways, including adding some of their cool style. 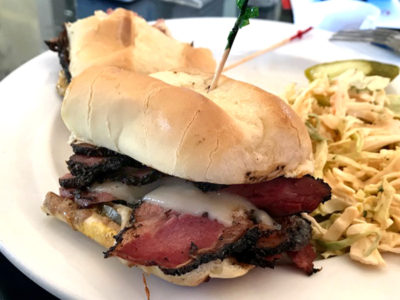 JC’s Patio Café sits tucked away in the El Paseo Park Plaza. The little nook greets guest with colorful umbrellas and a soothing fountain, a perfect accompaniment to a relaxing outdoor dining experience. It’s just a cool spot, and feels a world away from the commercial aspect which surrounds it just down the street. JC’s Patio Café keeps it real, highlighting the warmth and charm of a retro El Paseo.

The Hutchinson’s summer make-over was focused on the bar which before looked like an afterthought, with no real seating and a closed in feel. They decided to open up the bar, and increase the seating potential, resulting in the bar being a viable focal point, and actually making the interior of the restaurant look larger. Not wanting to go with a mainstream marble top, the Hutchinson’s searched for a different statement surface and found what they were looking for, with an attached back story as an added bonus. The new smooth surface of the bar is actually reclaimed maple wood, assembled from an old basketball court from a Los Angeles high school built in the 1950’s. For extra story texture, they are currently researching which high school the floor came from. The now airy bar has plenty of seating, and beachy-ness to it. Eventually, a hanging glass rack will finish off the bars new look. An illuminated red kitchen sign was another one of the couples décor finds, and sits snuggly over the kitchen entrance. It all came together very nicely! 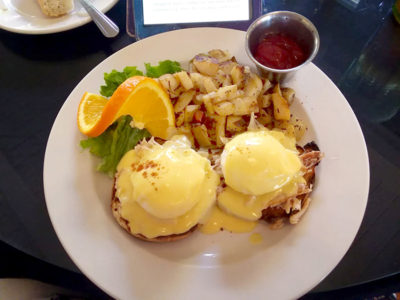 The bar gives guests another place to enjoy all of the fabulous fare that JC’s has to offer, including all day Happy Hour drinks ($5 well drinks, wine, selected beer and house specialty cocktails). Have some Happy Hour food with your drinks from 3pm to 8pm with such menu items as Chips & Salsa, Pulled Pork Sliders, Bacon Cheeseburger, Steak Quesadilla and more.

Of course the patio at the café is always the star, especially when the weather cooperates, “Everyone wants to sit out there,” says Casey. And there is no wonder why, as it is just so enchanting. On any given day, you will find patrons relaxing under the umbrellas by day, or gazing at the stars by night, all while delighting in menu items which include Breakfast/Brunch selections, Avocado Toast (on whole grain toast served with fruit), Greek Scramble (eggs, spinach, tomato and feta cheese, choice of fruit or potato’s and toast), Cinnamon French Toast (serve with butter, syrup and fruit) plus many more. For Lunch and Dinner there are a variety of salads, sandwiches and entrees to choose from, such as the Poached Salmon Salad (wild caught salmon, mixed greens, tomato, cucumber and egg, served with a raspberry vinaigrette dressing) and Mimosa Salad (mixed greens, avocado, tomato, cucumber, egg, croutons, tossed with an orange honey dressing) just the tip the iceberg. Sandwiches are proudly made with Boars Head Deli provisions and include the Hot Pastrami Melt (thinly sliced pastrami, provolone, mustard & pickles served on a French roll) and Ortega Melt (roast beef or chicken breast, Ortega chili, pepper jack cheese, served on a 4 cheese deli bun) as well an many other sandwich options. 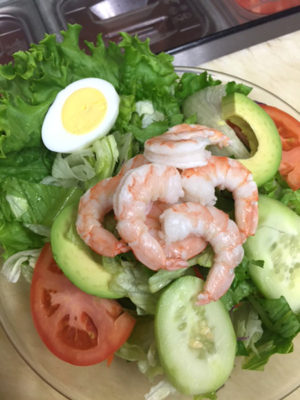 While chatting with Hutchinson’s about all of the updates that they have made to their restaurant, it was so clear to see how much they love what they do. It comes through in every aspect of their business, from the food, to vibe and especially the way that they treat their guests, like they are old friends, “It’s just a cool, funky, fun place to come and enjoy yourself,” said Casey. It’s also a refreshing change from what can sometimes be a commercially influenced and homogenized area of the desert. They are keeping it old school friendly and inviting, with every other element that it takes to have a long lasting restaurant in the Coachella Valley. I’m excited for what’s to come at JC’s Patio Café, and look forward to taking a seat at their beautiful new bar again soon. Cheers!