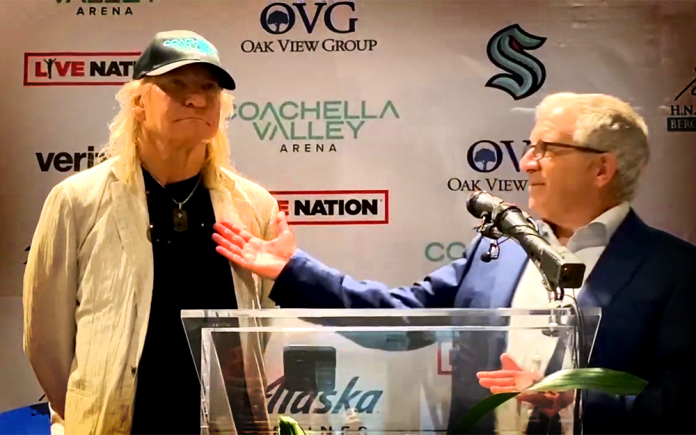 On a warm Wednesday afternoon, June 2nd to be exact, an incredible brain trust gathered at the Classic Club in Palm Desert to announce a new sports and entertainment arena in the Coachella Valley. The new project broke ground officially on Wednesday. The Coachella Valley Arena will host a professional AHL hockey team, an affiliate of the Seattle Kraken, the latest expansion team for the NHL.

The venture will be headed up by industry innovators, Oak View Group, with seasoned visionary Irving Azoff concocting another forward thinking entertainment venue that will not only elevate local talent but attract global talent to the Coachella Valley. Irving Azoff, an American entertainment executive and former executive chairman of Live Nation, started his career managing REO Speedwagon and soon after he started working with The Eagles. He is considered the Steve Jobs of the music and entertainment industry, a true visionary that brings a rock and roll history wrapped inside a movie packed in multiple arenas across the country. He jokingly remarked that he just found out he’s now part owner of a hockey team!

Mr. Azoff introduced a friend of his to the audience, saying they met when this fella in Lake Geneva, WI jumped out of a tree as a member of the James Gang. His long time friend and rock and roll icon, Joe Walsh, took the podium with heavy applause. Azoff recognized Walsh for the benefit work he dedicated himself to for our Veterans. As Walsh leaned into the microphone, he confessed (in gest) that this (arena) was all his idea. The rockstar continued to heap praise on the Coachella Valley, the Oak View Group and the H.N. and Francis C.Berger Foundation.

Joe Walsh continued to state his heart-felt support of the project. “This is a special place. The audiences are fantastic. There is a desert vibe here. So, it’s different from everywhere else we play. I’ve seen the Valley grow and grow and the music get better. I truly think at this point what Coachella Valley needs is a world class venue. “ Walsh went on to say that once the venue was completed, “I guarantee The Eagles will play opening night!” Of course, the audience erupted in grand applause as the reality of what a venue like the Coachella Valley Arena will mean to our valley. Stay tuned for more on this development in the days, weeks and months ahead.