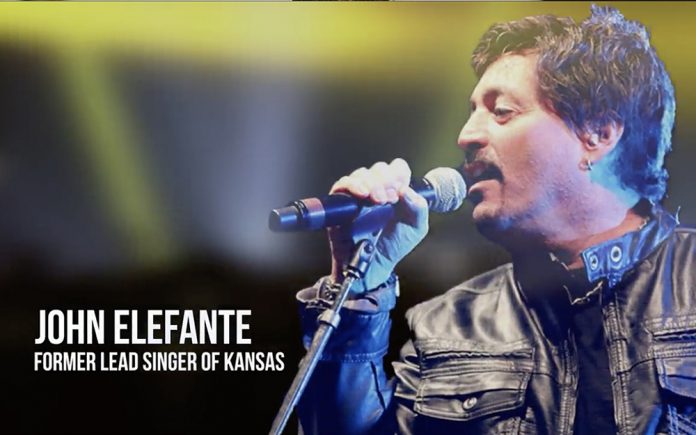 John Elefante auditioned and secured the lead vocalist/keyboardist position for Kansas in 1981 beating out the likes of Sammy Hagar (Van Halen) and Doug Pinnick (King’s-X). That year, the band was one of the top-grossing concert acts in the world.

He was also a major songwriting contributor along with lead guitarist/keyboardist/songwriter Kerry Livgren. On 1982’s Vinyl Confessions, he co-wrote and sang the No. 4 Billboard Mainstream Rock hit, “Play the Game Tonight.” He also wrote the acoustic-based classic “Chasing Shadows,” along with the Top 40 single, “Right Away.” The next year, on the following album, Drastic Measures, he wrote the early MTV favorite, “Fight Fire with Fire,” which remains the band’s highest charting single at No. 3 on the Mainstream Rock chart as well as a staple of Kansas’ live shows to this day. Elefante was also responsible for “Everybody’s My Friend,” which was released as the second single from the album and reached No. 34 on the Billboard Mainstream Rock chart.

Elefante will be performing at Spotlight 29 Casino on Saturday, November 2, at 8 p.m. in the Spotlight Showroom for the All Star Jam featuring the Rock legends Wally Palmar (THE ROMANTICS), Steve Augeri (former lead vocalist for JOURNEY), Jason Scheff (former lead vocalist of CHICAGO). One hundred percent of proceeds from ticket sales will benefit non-profit organization Martha’s Village, one of the largest providers of homeless services in the Coachella Valley and Riverside County. You can purchase tickets at spotlight29.com.

Coachella Valley Weekly spoke with Elefante from his Tennessee home.

CVW: You have close connections to the Coachella Valley. Tell us about your past associations.

Elefante: “My wife and I have a big history with Palm Desert and La Quinta. We lived in California before we had kids and used to come to Palm Desert once a month. We love La Quinta, it was our favorite place and it’s beautiful. We regularly attended what is now the BNP Paribas Open in Indian Wells. One year they were offering a $98 deal and it was so freaking hot. I know things are kind of year-round now. I have a show in Phoenix two nights before so I’ll be flying into Palm Springs a day earlier than I normally would. There’s a place called Castelli’s Ristorante where we love to eat, it smells like my house growing up. I love Mexican food too! And of course there’s In-N-Out. We don’t have In-N-Out in Tennessee. The minute we get off the plane we make a B line for In-N-Out. You can set your watch by it.” 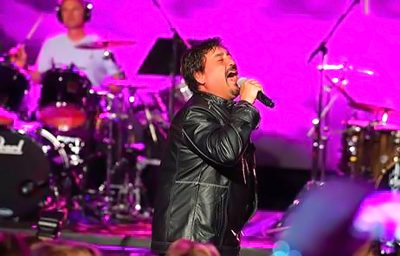 Elefante: “I love the all-star situation, they are so much fun to do. There’s so much more than what happens on stage, you travel together you hotel together and eat together. I just like all these guys so much they’re like brothers to me. When I go out there all by my lonesome it’s lonesome. This is a really good show. You’re going to hear an hour and a half or better worth of humongous hit songs. There’s not one song played that you won’t recognize.”

CVW: You’ve accomplished so much as a performer and producer.

Elefante: “It’s kind of spread all over the place in my career. I’ve done some really impactful performances. I’ve produced a lot of records that have gone on to some great things. I’ve been blessed to have produced some great music and owned, along with my brother, a humongous studio, Sound Kitchen, where Bon Jovi and Bruce Springsteen recorded. We got to meet those guys as they came and went. We built that studio from the ground up. We’ve always been studio nuts. My brother and I always fancied recording studios and gadgetry. I’ve been on all sides of the music business. I’ve owned a record company and a publishing company. I’ve been an artist, I’ve signed artists to my record label. I’ve been on every side of the fence there is. My brother Dino Elefante, incidentally, signed Katy Perry. He went to a Los Angeles showcase and she was the opening act performing two or three acoustic songs by herself. After the showcase everyone ran up to the bands’ managers to banter and we asked football great Rosie Grier, who put the showcase together, about the little girl who opened the show; that was Katie Hudson aka Katy Perry. We brought her back to Nashville. My brother stayed an extra day in L.A. to meet her parents. The girl has so much charisma and is an amazing person. She did two records for us. The label disbanded and the rest is history.”

CVW: In the early 80’s you were heavily involved in the success of Christian rock bands Petra and Guardian. What do you recall about those early days?

Elefante: “We produced 12 Petra records and went on to win three Grammys and about 5 Guardian albums. Guardian was the first overtly Christian band on MTV. Stryper was coming in on different heading and a secular label. Those were some fun times. A lot of them didn’t consider themselves Christian bands per se but tagged themselves as a band made up of Christians. What they believed was in their lyrics.”

CVW: You produced the soundtrack to the ‘Brat Pack’ 80’s film St Elmo’s Fire which featured Emilio Estevez, Rob Lowe and Demi Moore. . What was that like?

Elefante: “I got to produce the soundtrack to St. Elmo’s Fire with David Foster that included artists Billy Squier, Jon Anderson (YES), John Parr and Fee Waybill (The Tubes). Incidentally, our band ELEFANTE had the planned third single, “Young and Innocent,” and the movie started to peter out so we never got it released.”

CVW: Your solo work is equally uplifting, both musically and lyrically. On My Way to the Sun is transcendent.

Elefante: “On My Way to the Sun, was released in 2013. I did one of those Kickstarter campaigns. At first, I didn’t want to do it, begging for money seemed lame, but I found out very quickly that the people that give to help you make a record don’t give begrudgingly. They feel like they are part of the record and they feel like they were instrumental in making it happen. It was so much different than I thought it was going to be. It was really a great experience. It was so great not watching a record company take everything and breathe down my back. The old days, they’d give you money to make a record and you’d be recouping it the rest of your life. Some of their recoupment practices were questionable. I hired my own distribution and we did all our own promotion. It was nice not having a record company say, ‘nah, that’s not the right single’ or ‘let’s not do that’ or ‘we need to remix the record’. As Frank Sinatra said, ‘I did it my way’.

CVW: What was it like having the Sound Kitchen, which, at the time, was one of the largest recording studios in the southeastern United States?

Elefante: “Between 1993 and 2006 that place was the most happening and popular studio in the country. We had everybody in there. Instead of going after the artists, we went after the producers. My parents used to cook 7-course meals for Vince Gill, Alan Jackson and Julio Iglesias. It was a southern Sound Kitchen, that’s what it was about. You make music and you eat. Technology is so inexpensive now. You can’t get somebody to come in and pay $1,600 a day for a studio when you can get the same thing at home for a $12,000 investment.”

CVW: Do you have any new music in the works?

Elefante: “I’m going to make a record next year. The last record I made from scratch by myself. I wrote, recorded, produced and sang everything. I brought in some guest artists but this time I’m going to do a lot more collaboration. There are a lot of people I want to work with. Phil Keaggy is one of them; also, guitarist Dave Amato from REO Speedwagon and Kenny Aronoff, one of the most in-demand session drummers.”

CVW: These all-star shows are extraordinary. What is the allure for you?

Elefante: “I connect with all of them. I’ve known the guys in Sixwire for 7 or 8 years now. I’ve gotten really close with Steve Augeri and Jason Scheff. When you’re out there doing shows you’re together all the time. We’ve had a lot of great discussions about our lives, the business and raising families. It’s interesting how fast you can grow close to somebody.”

CVW: Your focus on giving back through your faith is honorable.

Elefante: “I think it’s a mandate. It would be sinful for me not to. To who much is given, much is expected. That runs through my mind a lot. I won’t sit here and tell you what I give and what I don’t give but I try and give back whenever I can. When you go out and do gigs in these big facilities, arenas, casinos, venues whatever it is, there’s always people hanging around and saying, ‘wow, there’s the rock stars’. I always try and make friends with those guys because they never forget it. I’ve met so many great people like that. What about the guy that’s doing the dishes in the back or preparing your meal for you before the show? Don’t they deserve any attention? All the guys in Sixwire and the other artists go out of their way to stop people helping out in any capacity to thank them and ask them, ‘what can we do for you?’ We’re pegged as ‘nose in the air’ rock people and untouchable. I never want to be that. I want somebody walking out saying, ‘that guy was really nice’. I think that’s the way it should be.”

Elefante: “I have two older adopted kids, a son (23) and daughter (26). My son just graduated from the University of Tennessee. We had a ‘surprise’ with our 17 year old. I also have a granddaughter who is 18 months. They take up a different part of your heart, it’s a rich blessing.”