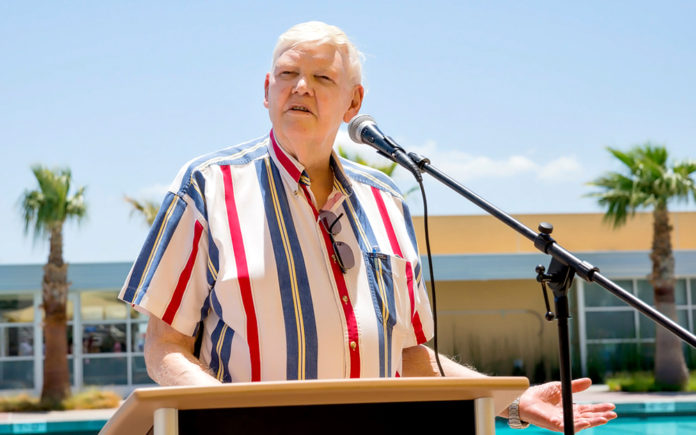 There is a verse in the Psalms, “I lift up mine eyes unto the mountains, from whence cometh my strength.” That was a favorite quote of John Furbee who died July 12 at the age of 87. It is fitting because, as a young pharmacist, Furbee worked at a drug store on south Palm Canyon where he often found himself starring out the large windows at mighty San Jacinto.

Before coming to Palm Springs, Furbee left West Virginia, driving west in a red Pontiac convertible. It was the late 1960s. He finished college, and served time in the military.

Furbee left his hometown to get out of the snow and cold, and to forge his path in life. He had chosen the same profession as his father and brother, and wanted to find his own community.

After first living in Los Angeles, Furbee made his way to the desert. Where he enjoyed not only the weather, but also found the people kind and friendly. He soon had a keen interest in real estate and community development.

When Brown took Furbee to Desert Hot Springs, a small growing community north of the freeway, Furbee was stunned by the fantastic valley and mountain views.

The Psalms’ verse certainly must have come to mind.

During his first visit to DHS, Furbee bought a Mid-Century modern hotel, in which he lived and ran. He enjoyed the spectacular vistas, the birds, the quiet, the wildlife and the hiking.

In short time, Furbee became a shrewd and discerning local businessman. He walked into the only Desert Hot Springs drug store, took a look around, and decided to buy it.

Furbee’s decision was made not because of the spreadsheet or inventory, but by the wear-and-tear he noticed on the floor in front of the cash register. He bought the whole building, which included attached apartments.

That was in 1969 and the beginning of Furbee’s business acumen, real estate empire and commitment to building homes and raising the quality of life in Desert Hot Springs.

“My dad loved the community right away,” said Steven Schick, Furbee’s son and Vice President of Furbee Enterprises. “He liked the small town feel and saw the potential for family run businesses and beautiful hillside homes.” Schick is the love child of Furbee and Margaret House.

Running his pharmacy was more fun than a job for Furbee.

“He loved to find interesting gift items that he knew his customers would buy,” said Schick. “While other druggist wouldn’t make house calls, my dad did. He was the only pharmacy to deliver. The nursing homes really appreciated that service.”

Furbee sold the pharmacy in 1977. But, he continued buying real estate in DHS. He purchased tracts of land, empty lots, and choice hillside acreage.

“There was a time when everyone said he was crazy because he bought every parcel of land that was available,” said Schick. “He took risks. He wasn’t afraid of anything. He had a vision for the community that he believed in.”

Partnering with another developer, Furbee formed Sun Springs Homes, building and selling over 400 of the popular houses.

Some of the land in Furbee’s portfolio was donated to Desert Hot Springs for the Community Health and Wellness Center, which included an aquatic center, Boys & Girls Club and Borrego Health. Furbee had a purpose and vision for the land and he worked diligently for over a decade to see it come to fruition.

“My dad was always an advocate for kids and animals. He served on a lot of boards in the Coachella Valley,” said Schick. “He did it because he saw that the city of Desert Hot Springs was not being represented. He fought hard for the community when no one else would. He gave his time and used his clout to build a better life for the people in the city. He didn’t do it to get his name on buildings. The naming, ‘John Furbee Aquatic Center,’ was not his choice. He was just happy that the project was completed.”

Serving on committees outside of DHS, Furbee found that many of the members had never even been to the hillside city.

Furbee was an active community member in DHS from the very start. He never ran for office, but was a respected leader. He served on the Mission Springs Water Board and its Foundation; Angel View; and the Boys & Girls Club, to name only a few.

When local city politics became heated or tense, sometimes the only way to get people around a table for a discussion was to guarantee Furbee would be present.

“He accepted everyone for who they were and was very good at working with people,” said local Rotarian Ivan Sewell, DHS resident, and co-owner of The Top Shop – a design and print studio.

“As long as I can remember, John was around and wanted to make people happy,” said Sewell. “He was always up for making someone laugh. I never saw him angry or frustrated. Between John and my grandpa Jack, I learned quit a bit. I’m very fortunate.”

Furbee was a long time member of the local Rotary and a welcome presence with his cherubic grin and six-foot plus stature. He was smart, intuitive and inclusive.

“He brought a level of professionalism and expectation to the community,” said Sewell. “He was an understanding man and good at facilitating so that everyone involved got at least a little of what they wanted. He was often behind the scenes making things work. If a Rotary project came up short, he would step up. I don’t think anyone really knows the true extent of his generosity.”

Sewell wants people to remember Furbee’s kind heartedness and that he was a man of the people who stayed level headed and focused on what was best for the city.

“He had means. He could have lived anywhere in the world, or up on the hill in a big expensive house, but he stayed in the same home in the middle of town,” said Sewell. “I think he probably got as much out of DHS as the city got out of him. He was a man of integrity.”

Sewell hopes that the town can keep moving forward in the spirit of Furbee’s good works and vision. “At Rotary we want to live up to John’s expectation,” said Sewell. “He was a good influence on all of us.”

DHS Rotary President, Jackie Chatman, said she was honored to know Furbee. “John helped countless people,” said Chatman. “He was a shining example of the Rotary Club’s motto ‘Service above self.’ John left us with a lot of history and a strong foundation. We want to continue with that legacy and continue to do good work here in Desert Hot Springs.”

The Rotary intends to establish an education scholarship in Furbee’s name.

A humble and easygoing man, Furbee preferred to tell a joke or use a pun rather than toot his own horn. When he bought his home and the land around it, he made a family compound where he tended an orchard, raised many beloved dogs over the years, and fed the wild birds — buying 10 pounds of seed each week.

Furbee was a loyal friend and family man. He was an excellent chess player, loved popcorn and coffee. His only extravagance was custom made shirts, which was necessary because he had long arms.

Those extended arms reached a lot further than he ever knew.

“We had breakfast together everyday. We’d read the paper and talked about life,” said Schick. “He was the best dad ever and the greatest man I’ve ever known.”