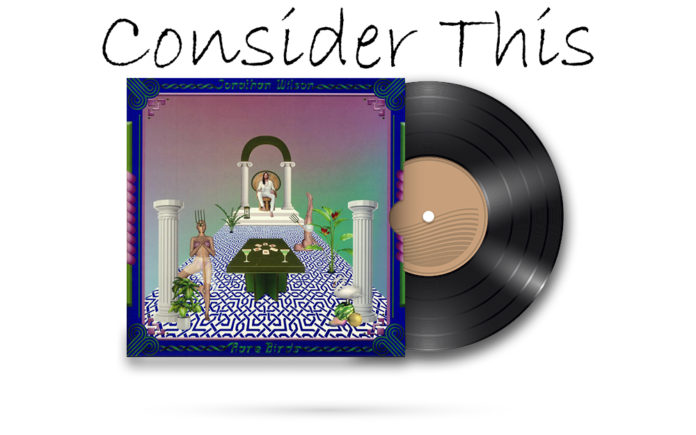 In these days of selfies, earbuds, SoundCloud, MP3’s and instant gratification, it’s surprising to find some musicians are still making headphone music. For those of you too young to remember, headphone music was a phenomenon from the early ‘70s, best exemplified by records like Pink Floyd’s “Dark Side Of The Moon,” Todd Rundgren’s “Something/Anything” and Mike Oldfield’s “Tubular Bells.” These albums offered jigsaw melodies and kaleidoscopic arrangements that were best experienced alone, preferably in the dark in a basement or rec room with some herbal refreshment readily available.

Jonathan Wilson makes headphone music. Born in 1974, the North Carolina native grew up in tiny Forest City. His dad was a musician and band leader, his grandad a preacher. He became proficient at piano and guitar at an early age.  By the early ‘90s collaborating with Benji Hughes and they formed the band Muscadine. They were signed to Sire Records and quickly relocated to Los Angeles. Although they released one album, The Ballad of Hope Nicholls, in 1998, the band came apart at the seams.

Left to fend for himself, Jonathan became a bit of a nomad living in Georgia and New York before finally settling in L.A. He not only taught himself the rudiments of engineering, he also amassed an impressive array of analog recording equipment. He set up his own studio and for several years earned his keep as a producer and session musician. He worked on albums by artists like Dawes, Elvis Costello, Erykah Badhu and Jenny Lewis.

By this point, Jonathan was living in Laurel Canyon, back in the ‘60s, the storied enclave that sits between Hollywood and the San Fernando Valley, had been home to legendary musicians like Joni Mitchell, the Byrds, Mama Cass Elliott, Jim Morrison and Gram Parsons. He reinvigorated that musical tradition 21st century style by hosting Wednesday night jam sessions. The informal evening attracted bands like Black Crowes and Wallflowers, along with Canyon elder statesmen like Jackson Browne and Graham Nash.

Although he was busy with session work, production chores and touring, Jonathan never stopped creating his own music. His 2007 solo debut, FrankieRay, was never officially released, instead, he just handed out CD-Rs to friends and fans. Four years later Gentle Spirit arrived officially, on CD and vinyl.

The cognoscenti took notice, and the album received glowing notices. British Rock mags like Uncut and Mojo, both named him Best New Artist for 2011. The album was equal parts rustic and spacey, best described as Neil Young’s Harvest meets Pink Floyd’s Dark Side Of The Moon.

The next year, Jonathan returned to the producer’s chair for Father John Misty’s debut, Fear Fun as well as Man & Myth from British Folk legend, Roy Harper. By 2013 he released his sophomore effort, “Fanfare.” His second record expanded his sound incorporating Jazz and Prog-Rock flourishes and featuring some all-star assists from David Crosby, Graham Nash, and Heartbreakers Mike Campbell and Benmont Tench. Delivering on the promise of Gentle Spirit, it was clear a protean talent had arrived.

For the next few years Jonathan produced records for Bright Eyes visionary Conor Oberst and helmed two more critically acclaimed albums from Father John Misty. He also began a symbiotic collaboration with cranky Pink Floyd co-founder Roger Waters. Not only did he play guitar and keyboards on Roger’s fifth solo album, Is This Really The Life We Want, he performed in Waters’ touring band. Still, he continued to write his own music and the result is his fourth long-player, Rare Birds.

The album hits the ground running with “Trafalgar Square.” Following a drum roll overture featuring fluttery keys, phased guitars and bouzouki-esque riffs, time signatures shift and lock into a galumphing rhythm accented by fuzz-crusty guitars and a Glam-tastic groove. Lyrics unspool a saga of chance encounters that ping-pong between London and Laurel Canyon. “I’ve seem you walking through Trafalgar Square, Little Billy Shears was on piano…I’ve seen you driving on the 405, hey were you listening to Zappa?” The lyrics go on to name-check locals-only landmarks like the ruins of Houdini’s castle and Benedict Canyon. Its ambitious scope only hints at the aural pleasures that await the listener.

Several tracks are very L.A.-centric. “Sunset Blvd” is named for the city-wide artery that runs parallel with boulevards like Hollywood and Santa Monica. It stretches from downtown to Malibu, and his tale is as vivid and lonely as the 1950 Billy Wilder film classic that shares the same title.

The song opens tentatively with searching piano chords and hushed vocals as Jonathan sets the scene; “There’s a cherry on top tonight for men who look like Jesus tonight, if you play your cards right you can be with the son of God tonight,” he muses with only a hint of irony. Over a kick drum beat he recounts a carnal encounter… “We met on the floor, CCR was playing ‘As Long As I Can See The light’ they were singing/You gave me the look that said ‘let’s be animals tonight.’” But as the pulse and instrumentation increases, adding a string section, celeste and vocoder, the lyrics spin a saga of lost romance that’s suffused in regret. He remembers a time “way out on that precious boulevard where we can be timeless, weightless.”

Musically, “Hi-Ho The Righteous” is the complete antithesis of “Sunset…” From its galloping gait, loping pedal steel, jangly acoustic guitars and whispery Moog, mellotron and zither, it taps into a Cosmic American sound that echoes Gram Parsons and Buffalo Springfield. Tongue firmly in cheek he venerates the City Of Angels, “Lord I thank you for this Hollywood playground, there’s royalty in beachfront California,” even as he skewers “a wasteland of Herman Miller’s chairs, anti-depressants and all that.” The instrumental coda drifts purposefully, echoing the banjo symphony of “Nowadays Clancy Can’t Even Sing.”

Meanwhile, “There’s A Light” is a sleek and sunny ode to the Golden State. Powered by jangly guitar, whooshy synths, meandering pedal steel and lush strings, the sentiment is so effusive it could almost be a state anthem; “There Is A feeling in the California air, there is a lust for peace and righteousness everywhere.” Only the prickly guitar outro hints at the cynicism that lurks in the heart of every Angeleno.

Jonathan’s gaze turns inward on both “Living With Myself” and “Me.” If Sting, Peter Gabriel and Christopher Cross had a musical love child, it might sound like the former. A wash of synthesizers pool and eddy around a burnished beat and tensile bass lines. Splashes of pedal steel and bottleneck guitar lap around the edges as he wrestles with his conscience; “I know there was a place so long ago where I could find faith and purity, but nothing that sweet could inspire me/These darker thoughts they are now guiding me, so it goes that same old nagging feeling to do wrong, the lies I start to believe them.”

The latter doesn’t mince words; “Me, let’s look at me,” he intones over a hiccup-y off kilter beat, plaintive piano chords and celestial harmonies. Equal parts spiritual and soul-searching, the arrangement slowly builds into a frenetic crescendo of whip-sawing celeste, vocoder, mellotron and strings, until it collides with a skronky Echoplex sax solo.

The best tracks here are also the most labyrinthine. Stretching past the eight-minute mark, “Over The Midnight” feels like the aural equivalent of a Fellini-esque acid trip. Subterranean synths swirl around a propulsive rhythm, layering in pounding piano notes, squiggly guitar and bedrock bass lines. Jonathan envisions a parallel universe where “there’s no fear, no hatred, no killers no guns.” As the instrumentation gathers steam and the imagery becomes more fantastical, piano and vocoder indulge in a playful pas de deux on the break.

On “49 Hair Flips,” musical ambition takes a backseat to pointed social commentary. A sad-sack waltz melody wraps around a series of caustic swipes at our weird preoccupation with social media. Real life occurs but we can’t look up from our phones, for fear of missing something. Jonathan tests the limits of this disconnect; “We were burning, we were looting we were learning one or two things about life, we should fuck right in front of them, just to show them our light/We’ll be fucking we’ll be sucking while the rest of them are posting their lives, ahh these kids will never rock again, sign of the times.” (Sounds like he’s been to a Coachella or two).

Finally, the title track is anchored by a thumpy, four-on-the-floor beat, as aerodynamic guitars phase and flange, static-y one minute stentorian the next. The sonic maelstrom includes Wurlitzer notes, ARP synthesizers, vibraphone and pedal steel. It goes on for more than a minute before Jonathan’s vocals swoop in with some post-apocalyptic lyrics concerning “belts of radiation” and “beta decay.” Suddenly the whole enterprise powers down, locking into a stone-washed Countrified lament as he needles “Falsetto folkies with pitchfork at your side, they will be forgotten!/Way out in this desert boy, there’s nowhere to hide, you see your face in the sun’s daily mirror.”

Other interesting songs include the dystopian crunch of “Hard To Get Over.” Then there’s the trippy “Miriam Montague” which pokes fun at “Heartfelt hipster folkbots.” “Loving You” features the singular vocalese talents of Ambient Music pioneer, Laraaji. The record closes with the Cosmic torch and twang of “Mulholland Queen,” an homage to a tinseltown muse.

Even though Jonathan is a virtual one-man band, he received musical reinforcement from heavy-hitters like pedal steel legend Greg Liesz and drummer Joey Waronker, as well as some vocal assists from Jessica Wolfe and Holly Lessig (from the Brooklyn/L.A. band Lucius), Lana Del Rey and Josh Tillman (a.k.a. Father John Misty). Also along for the ride were bassists Jake Blanton and Dan Horn, Dan Bailey on drums, Ziad Rabie on saxophone, Drew Erickson, John Kirby and Jeff Remuno on keys, and a string section comprised of Tom Lea, Derek Stein and Pete Jakobson.

At one point, Jonathan ponders the vagaries of attraction; “Mostly talent, mostly mystic, the rest is magic.” That’s a perfect way to encapsulate “Rare Birds.” Brilliant and byzantine, it’s an intricate, yet intimate record that reveals something new with each listen.