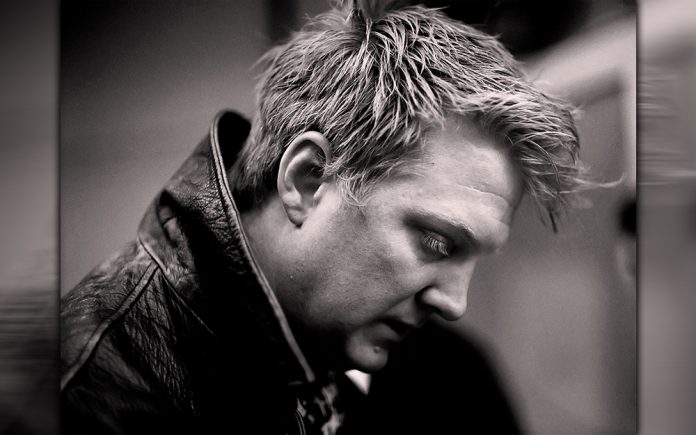 Queens of the Stone Age frontman and guitarist, Josh Homme, is a desert constant even if you don’t see him. As you will read, in his own words, he wears the desert on his sleeve…literally. 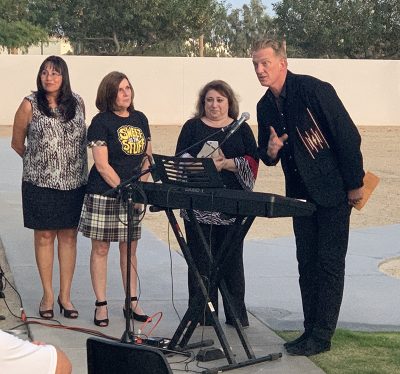 Homme was present during a dedication ceremony of a “musical pathway” at the Children’s Discovery Museum of the Desert in Rancho Mirage, California where he spoke about how music can be a springboard for all that is possible in life and was notably floored by the solo performance of Academy of Music Performance alum Tiffany Campbell, who sang and played keyboards on an original song she composed. He openly shared how touched he was at the vulnerability of her performance.

A father himself, daughter 13, sons 8 and 3, it was apparent that he has had much experience encouraging children and validating their feelings and artistry.

Homme’s The Sweet Stuff Foundation provided the grant to build the musical garden thanks to their commitment to help foster an atmosphere of creativity and introduce children to healthy outlets via music.

Coachella Valley Weekly sat with Homme to discuss the exhibit and his undiminished interconnectedness with the desert. 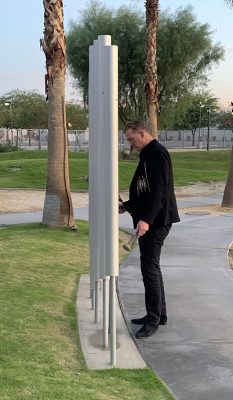 CVW: What a great thing you & The Sweet Stuff Foundation are doing with the CDMOD outdoor music exploration exhibit.

Homme: “For me, it’s not a big deal to come here. It’s important. The interesting thing is I still use the word ‘play’; that’s what I do with my friends, we play and that connection to play is a real creative and boundless style of doing something, it starts there. This exhibit is primarily for the beginning, it needs to be the earlier the better; the more that there’s no interruption between being an infant who plays and an adult who plays the better.”

CVW: Looking back, growing up here and developing your music career, what are your thoughts on the timing?

Homme: “I do feel quite blessed at the time frame because of the Punk Rock scene and the DIY nature of bands from SST Records like Black Flag or when D.R.I. played here even though they weren’t SST. At 13 years old and playing with SWA (pronounced swǒ) at the gymnasium in Palm Springs, these experiences that were so utterly do-it-yourself, permeated this valley so completely that no one ever believed they couldn’t. With guys like Mario and Larry Lalli, Gary Arce, Alfredo Hernandez, Scott Reeder and Brian Maloney, these guys are a little older than me and they were already doing it so I just believed it was possible. I think more credit to them than to me certainly.”

CVW: You benefited from the ‘Mario Lalli Effect’ like so many others and now here you are sowing seeds yourself.

Homme: “We were always desperate to play Rhythm & Brews. And I knew Mario was always someone who gave more than he got, but I also see the beautiful premise in giving without needing to ‘got’ nothin. Because what does that have to do with it? I’ve been really blessed and I’ve worked really hard but there’s a Mozart out there and they could be from here. All you need to do is put seeds out there and let it be. Out of all the things I’ve learned that’s the thing, don’t stop seeding it and letting it be.”

CVW: You’re considered a significant musical figure who hails from the Coachella Valley. What is your approach to staying connected to this magnificent place? 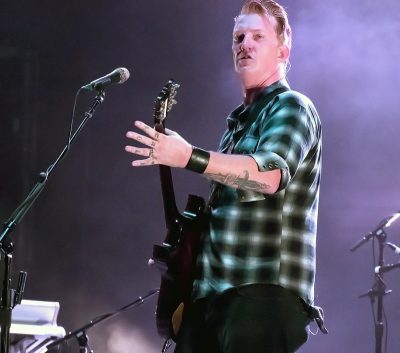 Homme: “I appreciate it. I don’t know that it’s deserved. I still have my place here, I’m still Hi Dez. I’m a desert boy. I had someone recently say to me, ‘Oh, I’ve lived here for six years, you don’t live here.’ I was like, ‘but I was born here, what are you talkin’ ‘bout?’ I got dirt in my veins! I got ‘ODC’ ‘Other Desert Cities’ tattooed on me. I am this, this is me. Frankly, this isn’t about competing states of insecurity, this is about the vulnerability to say, ’I’m so proud to be from here, with all its cuts and bruises and all its flowers.’ I am this, this is me, I love it, that’s why I’m always here. I’m here all the time. I’m so old school I just call it upstairs, downstairs. I don’t consider any difference between the stop light at Thousand Palms or going to Desert Hot Springs and going upstairs to Yucca Valley, what’s the difference? I know there’s a sign there but that’s really something you’re doing. I know that’s The Dez, man. When The Dez starts, it’s on. The stop sign and the city sign don’t mean too much.”

CVW: Congratulations on Desert Sessions Vols. 11 & 12, they have been a virtuosic succession of releases since the late 90’s that really forges music ahead and out of bounds. How does the process of those recordings translate to what you’re doing at CDMOD & with The Sweet Stuff Foundation?

Homme: “It’s a wingspan. It’s just getting larger because there are no rules in this. So why kowtow to ones that were made by people that are just older than you. You could do anything, do you want it or not? It really comes down to that belief. And I really do think the belief starts here at CDMOD. For me that’s just the beginning, I’m gonna do one there, there and there, I don’t care that it’s music, it could be giant chalk boards, I just want someone to have the chance here that I got in a different manner but wasn’t there before. It’s the willingness to live in the belief that playing and creating is not wrong, period.”

CVW: We all just witnessed Tiffany Campbell sing the hit song “Shallow” by Lady Gaga and Bradley Cooper and then she sung her original composition, which she did candidly. Did you feel what I felt? 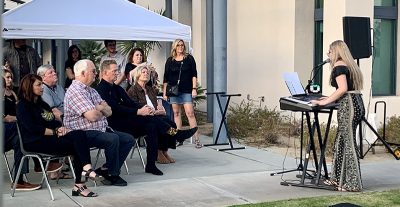 Homme: “Did you notice the difference? My buddy wrote “Shallow.” Do you see the categorical difference between trying to do justice to something and doing a good job and then someone emotes who they are. Where words fail, music begins. Do you have trouble describing your feelings? I do too, but I can play them for you and I would know and you would know and it’s never wrong, it’s never fucking wrong. All you have to do is tell the truth and be vulnerable, that’s it. Tiffany singing her song was the most important thing. That is the trajectory of the exhibit. It starts there, goes there, goes through me and goes beyond. To deny her vulnerability would be criminal and to just talk about axioms would be…and even to me (pointing to the desert) it’s dirt, sand which all this is/was to that, to this, to that, to this and to that. To acknowledge the line is to do it fine. That’s where I’m at.”

Thank you to The Sweet Stuff Foundation and Josh Homme for continuing to support the children of the Coachella Valley by restoring a commitment to the arts.