International singing superstar Julio Iglesias performed at Fantasy Springs Resort Casino last Saturday, September 17, in The Special Events Center to a capacity room of adoring fans from the Coachella Valley, Los Angeles and some as far as Arizona.

During the Concert he spoke to the audience about his life, his music and his back surgery. He reminded them how frail our bodies are and that we should all love life. “At 72 years old, my brains and my heart are more together than ever,” said Julio Iglesias. “I am grateful to life and to all my fans who allowed me to sing for 49 years.”

The crowd cheered throughout the show and sang along with several of his most famous songs. Toward the end of one song, during a slow quiet moment, a fan shouted out, “We love you, Julio,” and without missing a beat in the song, he quickly changed the next lyric as he slowly sang, “I love you, too.” The crowd cheered with joy to his response. A wonderful concert!

Born and raised in Madrid, Spain on September 23, 1943, Julio Iglesias, auditioned for the school choir as a child, but was told by the Priest he couldn’t sing; something he remembers vividly. Instead, he was told to play football, aka soccer, which he loved. He played throughout his school years and became a professional football player with Real Madrid Castilla until he was 20 years old. In a traumatic, near fatal car accident, he could no longer play football.

“I was completely paralyzed from the accident.” He said he could see his parents seemed to have no hope. A Doctor gave him a guitar to help him move his fingers as therapy. This opened up a whole new world to him; the World of Music. That changed the direction of his life.

Music is a Gift from God. Iglesias is certainly proof of that. Spending two and a half years learning to play an instrument for therapy; singing for the first time, discovering harmonies and writing songs; while recovering from near death, is nothing short of a miracle. God uses people to do His Will, and it is evidenced by all the beautiful love songs Iglesias has written and continues to sing. He has touched the hearts of millions of people, of all faiths and beliefs, throughout the world with his music…“If I wasn’t in an accident, I wouldn’t be singing today.”

In 1968, Iglesias won the Benidorm International Song Festival. This brought him to the 1970 Eurovision Song Contest where he represented Spain, singing his own song, “Gwendolyne,” and although he finished fourth, Iglesias believes this was the springboard that kick-started his career. Soon after, he beat records in Spain, where he performed 41 concerts in 41 cities in 30 days.

In 1983, the duet he recorded with Willie Nelson, “To All The Girls I’ve Loved Before” catapulted his career in the United States. When Iglesias met Nelson, he wasn’t fluent in English and the pronunciation of “girls” was a bit of a challenge, but this unusual duet combination, did it. This song was Iglesias’ biggest hit in the United States and Canada; and Nelson’s biggest European Hit.

Thanks to this song, written by Hal David and Albert Hammond, “1100 Bel Air Place” became Iglesias’ world-wide best selling album. In 1984, Nelson and Iglesias were named “Duo of the Year” by the Country Music Association and “To All The Girls I’ve Loved Before” was named “Single of the Year” by the Academy of Country Music. “You learn something from singing with other singers like Sinatra and Sting, I love it.” Visit www.JulioIglesias.com for more… 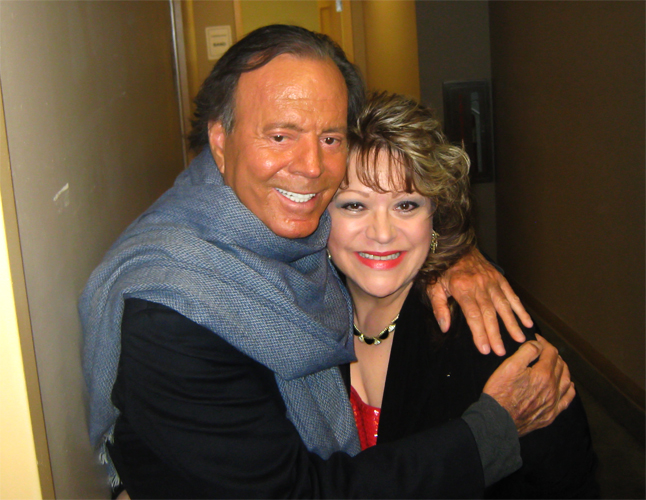 I was personally invited to the Concert by Julio Iglesias and given his road manager’s name and number to visit with him after the show. She brought me and my friend; personal body guard for Jose Jose, Jilly Rizzo and Frank Sinatra, Jr.; actor David DeCastro, to meet him. This picture was taken backstage before he left the venue. “I love Jose Jose. He was one of the Great Masters of all time. We did many Concerts together. He is a legend and sang like a bird.”

There was no “Meet and Greet” that evening, but the fans were lined up outside and cheered Iglesias as he walked to the Limousine. Marcus, Francisco and the entire Casino Security Staff did an outstanding job with crowd control. It is an evening I will always remember.