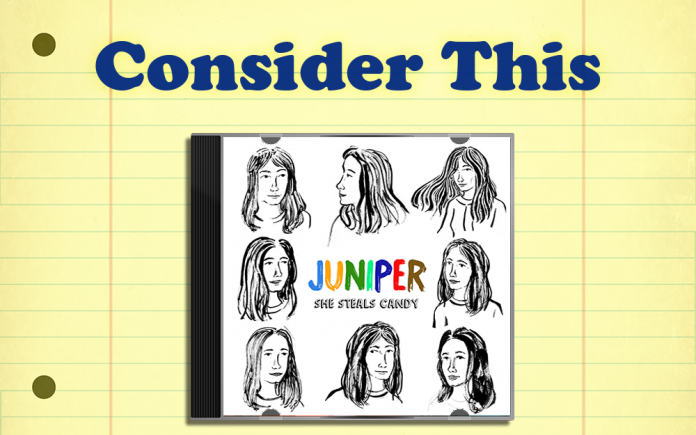 If you grow up soaking up myriad music styles, it’s bound to make an indelible impression. So, it isn’t surprising that Juniper Shelley released her solo debut at age 15. Not only did she inherit her mom’s impeccable musical taste, but her dad, Michael, a talented singer-songwriter in his own right, encouraged her nascent talent.

She began learning the piano in the fourth grade, quickly segueing to flute and finally guitar. Soon enough, she was writing her own stuff. Her dad, who also hosts a weekly radio show on WMFU, had already fed her a steady musical diet of The Beach Boys, Beatles, Zombies and Fountains Of Wayne. But contemporary influences like Taylor Swift crept in as well.

At age nine, Juniper and her dad inaugurated an annual tradition of writing and recording their own original Christmas song. That opened the floodgates, and the pair began to collaborate on more Pop-oriented songs. She provided distaff teenage context, with full vetopower over anything that she deemed fake. In turn, he wrapped the lyrics in melodies that fizzed, fuzzed, snapped, crackled and popped. Several of those songs, plus a few tracks from indie superstars like Francis McDonald (Teenage Fanclub), Kim Shattuck (The Muffs, The Beards), plus Tommy and Kyle from The Rubninoos, wound upon her self-titled debut. Released in the Spring of 2020, it garnered rave reviews. The daughter/father duo began working on a follow-up in the midst of the pandemic lock-down. Rather than create a new album from scratch, Juniper and her dad decided to record an album of covers, with a couple of originals thrown in for good measure. The result is a disparate, 16-song set entitled She Steals Candy.

The album kicks into gear with a drum salvo that lands halfway between the George Of The Jungle theme and “Everybody Wants Some” from DLR-era Van Halen. Juniper’s take The Sails’ BritPop hit jettisons their surly angst by latticing sugary vocals atop downstroke guitar riffs and throbbing bass lines. Even as lyrics pine for an unfaithful ex- “BANG, BANG, BANG goes the sound of my heart, when people that you trust rip it apart,” her sunny demeanor signals that she’s already bouncing back.

Juniper takes Girl Power to another level by covering a plethora of songs written by essential feminine voices. First up is a tart take on The Bangles’ “James.” Growly bass lines and a clikity-clack beat is augmented by tremolo’d guitar and stacked vocals. Discomfited by an equivocating swain; “You think there’s better for you, you think I’m too young to see this thing through…” She draws a line in the sand; “And now I realize I had it all wrong, I’ll only take this shit for so long, whoa James, letting me down again James.” A spiky guitar solo on the break underscores her resolve.

Once again, she turns to (the late, great) Kim Shattuck and her Beards compadre Lisa Marr, who supply “Taste The Soup.” A slice of sunny Tropicalia, it’s powered by percolating percussion, sparkly glockenspiel, lilting piano, stabby organ notes, filigreed acoustic guitar and a peppery horn section. Labyrinthine lyrics take a circuitous route when expressing affection; “You’re a stupid bit of childish fun, and probably going to kill me when you’re dead and gone, I know it’s a lot to say, I’m a subtle person who bites down hard, and you can try and catch me when I’m running through the yard, and you are going to get through okay.”

Even as the Go-Go’s garnered critical acclaim and commercial success, thanks to their effervescent Pop-Punk melodies and angular arrangements, they rarely received approbation for their lyrical acumen. It was evident on songs like “This Town” and “Skidmarks On My Heart” off their debut, as well as “Turn To You,” from their third long-player, Talk Show.” Juniper gives that one a whirl, dialing back on the original’s synth saturation. Instead, the bare-bones instrumentation, walking bass lines and shang-a-lang guitars connect with a snappy backbeat. Juniper’s croony delivery put the lyrics front and center. She urges a reluctant beau to stop resisting gravity’s pull; “It has a lot to do with the first time that we met, the wild dance in your eyes made up for what was never said, gotta get my message, stop spending all our precious time, because before you know it, we’ll be down to one last dime/There are no explanations, why I feel the way I do, the world makes it’s rotations but I just want to turn to turn to you.”

Even in these digital days, Juniper and Michael are seasoned crate-diggers, and they’ve managed to unearth a few nascent compositions from legendary Blues-Rocker, Delbert McClinton, back when he was fronting a Texas Garage band called The Ron-Dels. The trio never broke out nationally, but achieved some regional acclaim. “Pictures Of You” is a bit of a roughhewn, Cowpoke-y chanson. 6 and 12-string guitars, continental accordion and shivery bass are tethered to a clip-clop gait. A classic Country weeper, Juniper is alone and forsaken, with only a dog-eared photo for company; “I pretend that you’re still here with me, happy, just the way we used to be, but pictures can’t talk and they can’t see, know I’m in love with nothing more than a memory.” Lilting accordion notes intertwine with rippling guitar riffs on the break, rendering the yearning all the sweeter.

“If You Really Want Me To, I’ll Go” is a South Of The Border charmer that wraps sparkly Spanish guitars, Conjunto-flavored organ and sidewinder bass around a chunky backbeat. Vaguely passive-aggressive lyrics like “I don’t know just what you’re trying to do, you told me your love for me was true, I don’t understand, my love, please tell me what to do, if you really want me to, I’ll go” suggest a Fatal Attraction scenario is in the offing. Courtly guitar arpeggios weave in and out of patchwork instrumental quilt, leavening the lyrical angst. Meanwhile, “I Cry Cause I Care” is another lachrymose lament that is anchored by loose-limbed bass lines, a tick-tock beat and guitars that jingle, jangle and twang. Once again, the buoyant arrangement, coupled with Juniper’s effervescent delivery rides roughshod over another sad sack saga of a romance gone wrong.

Juniper and her dad sneak in a couple of originals, the title track and “Ride Between The Cars.” The former is all buzzy guitars, jittery bass, caffeinated keys and a stickity beat. She coolly croons about a mischievous alter-ego that indulges all her wicked impulses, sans consequence; “She shows up though she’s never expected, waste your breath cause she can’t be directed, she steals candy, but she shares it with me/And she will get you on her side, stand behind your curtains, then she will borrow all your clothes, sing you songs when you should really be asleep.” A spiraling guitar solo splits the difference between sticky-sweet bubblegum and Glam-tastic ‘70s AOR.

The latter matches a rumbling big beat with coiled bass lines, strafing guitars and zippy organ runs. Lyrics paint a vivid portrait of a kid who refuses to be seen as a damsel in distress; “She can laugh and wear a dress, she can all her friends at midnight and she’s working up top secret plans to take a giant step if she could just decide/She can ride between cars, she can scribble on a napkin, but she’s running low, so open it and give her something wonderful.” Clocking in at under two minutes, the outro is worth the price of admission, as whirly, Psychedelic organ oscillates wildly around a locomotive beat.

Juniper adds a distaff spin to an obscure, ‘60s nugget, “Don Stole My Girl” from Johnny Fortune, recalibrating it as “Dawn Stole My Guy.” A “Surfin’ & Spyin’ patina is achieved by layering reverb-drenched guitars, finger-popping bass lines and shadowy organ over a ticklish, hi-hat beat. There’s little room for editorializing within the “just-the-facts, Jack,” lyrical reportage; “He had a dimple on his cheek, his build was tall and so unique, when he let me down, I moved way across town, to forget our memories.” The rumbly guitar solo leaves little room for equivocation.

Finally, another Delbert McClinton track. “It’s Over” is a sprightly hoedown that weds kaleidoscopic guitars to pinwheeling keys, Conjunto-flavored accordion and sinewy bass to a cantering beat. Flickering guitars punctuate every act of betrayal; “He told me that he would always care, he told me he’d go with me anywhere, I don’t know what to say, he went away one day, he walked away and left me standing there.”

Other interesting tracks include the Girl Group pastiche of “Little Miss Stuck-Up.” A catchy little nugget, it was originally written and recorded by Bread front-man, David Gates under the rockin’ pseudonym, Del Ashley. Then there’s “See You Tonite,” off Kiss bassist Gene Simmons’ otherwise hit and miss 1978 solo debut. Juniper and her dad strip away the Beatlesque shine, and recast it as a breezy Bossa Nova. The album careens to a close with the thrashy Garage Punk thumper, “I’ve Got A Boy.” The song is bookended by whiplash guitars, swirly, Farfisa-fied organ notes, wiry bass lines and a pummeling beat. A defiant, no fucks given finish to a great record.

Cover albums are typically a tricky proposition. Versions of well-known songs can’t be too on the nose, but must remain recognizable. Juniper subverts expectation by offering up an eclectic collection of her favorites. She doesn’t particularly if anyone else is even vaguely familiar with most of these songs. Consequently, she makes them her own.

These days, most Gen. Z’ers are content to spend their days as Tik-Tok teen influencers (seriously, that’s a thing). Juniper clearly marches to the beat of a different drummer. By following her muse, she’s charting a course for an intriguing career.