Vicki and Don Melvin were still heartbroken over the loss of their precious 14-yr-old terrier, Salsa, when a neighbor told them about a rescue dog adoption event at the Shadow Mountain golf club.  The Melvins were open to the idea of fostering another pup, and soon I delivered a cute little terrier to their lovely home, rescued by Loving All Animals from the San Bernardino City Shelter.  Another friend mailed them a touching poem about “A Dog’s Last Will and Testament,” an excerpt from which is below:

“So when I die, please do not say, ‘I will never have a pet again, for the loss and pain is more than I can stand.’  Instead, go find an unloved dog, one whose life has held no joy or hope and give MY place to him.  This is the only thing I can give, The love I left behind.”
The Melvins were no strangers to the world of rescue dogs.  Fourteen years earlier, Don, a pilot for The Flying Samaritans Physicians, came across a tiny abandoned puppy in a Mexican village and he could not leave her behind.  When Don met the US Customs agents at the San Diego airport, the little pup was hidden inside his windbreaker.  In a moment of bad timing, the dog poked her head out from under the windbreaker at same time Don told the agent, “I have nothing to declare!” However, the agent recognized Don from prior flights, and realizing the dog was less than 6 weeks old, he ushered them through without documentation.  Tiny Salsa had her “green card” to freedom and a fabulous life with the Melvins.

The new terrier was loving like Salsa, but posed some challenges.  We suspect she was kept in a backyard in San Bernardino, a low income community with many abandoned animals.  She was picked up as a stray dog by animal control.  Kali arrived at the Melvins’ home skittish and afraid, reluctant to let them touch her.  She was not house trained; peeing on their floor promptly after arriving.  Vicki recalls, “Kali was hyperactive for the first two days, and we could not get near her.  She can jump up 5 feet, and she was all over our furniture including the kitchen island.  It took three days for her to warm up to us, and then she became very affectionate.”

The Melvins enjoyed going out on the nearby golf course in their golf cart and socializing with the neighbors and their dogs.  It was a happy routine with happy pooches who love canine companionship. The couple headed out on the golf cart to show off their new pup to the group and were shocked when Kali began snarling aggressively at the other dogs. The Melvins have many friends with dogs, and were disappointed that Kali seemed unable to carry on their tradition of “pooch and people” gatherings. 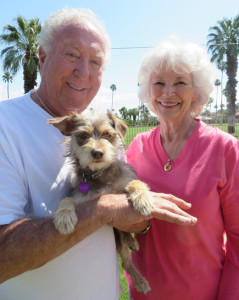 Things got worse one evening when the Melvins returned home and discovered that Kali, perhaps anxious in their absence, chewed their window shutters.  Don sadly told Vickie, “It looks like we are not going to be able to do this.”  Vickie tearfully telephoned me the next day, and Loving All Animals began searching for a new foster home that could address the dog’s issues.

Then Kali took things into her own “paws”, intervening in her fate. The Melvins woke up the following morning to find Kali wedged between them, staring straight into their eyes with the most pleading look imaginable.  Dogs sense the moods of humans, and Kali was aware of the Melvins’ distress and her own precarious future.  When they saw her beautiful pleading eyes, the Melvins knew they could never give her up.  Don explains, “It’s about falling in love, and love is forgiving.  Kali wants to be with us all the time.  She’s like Velcro and loves hanging out with us.”

With some advice from trainer Sandy Miller, and a lot of patience from the Melvins, Kali’s demeanor towards other dogs improved.  She is now part of the happy group of golf carters and their dogs, a little ringleader in the joyful playgroup.  All her behavior problems improved once Kali realized she was in her “furever” home.

Kali officially became a “Melvin”.  Her expression and demeanor reflect a happy security, knowing she’s home at last.  Vickie explains, “She brought so much love into our home.  Kali is so dear.  Although we said we would never get another dog after losing Salsa, we both needed another dog.  She gives us something to think about besides ourselves.”  Don adds, “Kali was terrified when she first arrived.  She now feels comfort and love, and that’s what she’s going to get for the rest of her life.”

To experience your own happy ending with a rescue dog, contact Loving All Animals in Palm Desert at www.lovingallanimals.org or call 760-834-7000.