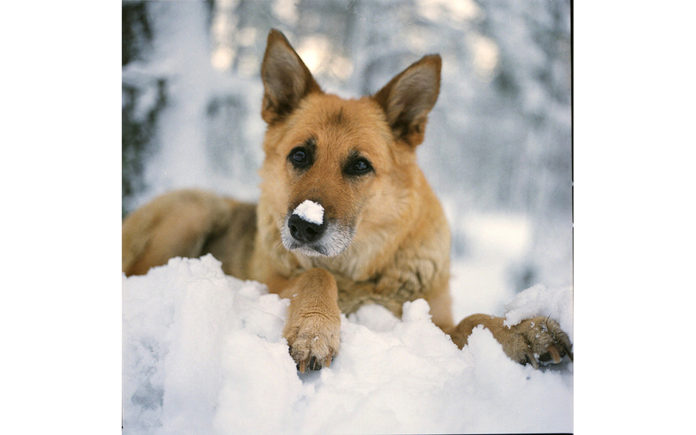 As freezing temperatures continue to grip our nation in March, countless dogs and cats suffer and perish when kept outdoors in the extreme weather.  While snow is a rare occurrence in the Coachella Valley, our winter nights dropped below freezing in some regions.

Patrick Evans, local animal lover and meteorologist with KESQ news Channel 3, reports, “White it’s not the coldest winter we’ve ever had, it’s been consistently colder and wetter than our average winter.  We’ve seen long periods of overnight lows in the 30’s and low 40’s.  Just like us, our pets aren’t used to these colder conditions.  It’s hard on their system as it is on ours.”   Please bring your pets indoors for shelter when extreme weather hits. There are many other compelling reasons to include your pets as inside family members.

Most Coachella Valley residents are wonderful pet owners, and their pets are kept safely indoors.  However, I recently spoke with a young woman who keeps her dogs outside 24 hours a day. She believed they are “unclean”.  Why do people have such beliefs?  What information do they need to change those beliefs?  We provided information about how having dogs around people actually improves their immune system, emotional well-being, and physical health.  It was unclear if this changed her mind.

Some people were raised by parents whose admonition, “Dogs belong outside!” still rings in their subconscious.  Some people grew up on farms or in countries where dogs are often kept as outdoor-only animals.  However, we live in a geographical area of extreme weather where keeping a dog outdoors can jeopardize his health and even cost him his life.

Dogs are social pack animals, and want nothing more than to be by your side. They are highly social creatures, born to be part of a pack or a human family. Most outdoor-only dogs suffer physically and psychologically when deprived of social contact.

It is a sad sight to see a neighbor’s dog tied to a post day after day, forlorn and bereft of human companionship.  Some of these animals become a neighborhood nuisance with their barking.  Under California penal code section 597, it is illegal to tether or chain a dog to a doghouse, post or other structure for longer than 3 hours in a 24 hour time period.  If you decide to approach offending friends and neighbors, do so in a nonjudgmental way, trying to educate them about the hazards of keeping their dog outdoors.  Ask them, “Why do you leave your dog outside all the time?”

Rising temperaments in the summer can cause a multitude of medical problems including death from heat stroke.  Older dogs and puppies are particularly vulnerable to heat stroke.  Think about a dog having to drink hot water out of his bowl in the sizzling summer weather, and worse yet having the water dry up.  Think about your dog trying to drink a bowl of water when it’s covered in frozen ice.  When your dog is kept out of sight outdoors, it’s easy to forget about their needs.

Ironically, keeping an outdoor dog for home security doesn’t do much good when the burglars break into the dwelling where the valuables are kept.  Outdoor dogs are indiscriminate barkers, and no one can tell if they are barking at a prowler or a child riding a bicycle down the street.  An inside dog is a true deterrent to thieves. Outdoor dogs can be stolen by thieves with a variety of sinister motives.

Small animals are subject to prey when outdoors unsupervised.  Small dogs may be seized by coyotes and birds of prey such as hawks and owls.  An acquaintance experienced the horror of hearing her Yorkshire terrier cry out amidst the flutter of wings, and the dog disappeared in a matter of seconds.

Bored and lonely, outdoor-only dogs develop bad habits.  They dig holes in the yard.  They chew on various objects out of boredom, including patio furniture, which can result in property damage, expensive vet bills, and even death.  Lonely dogs bark day and night, disturbing the neighborhood.  Lacking socialization, they may fail to bond with their humans.

Here is the best reason for keeping your dog in the house with you.  He will become your loving companion, amaze you with his unique personality, comfort you when you are sick, and communicate without speaking in ways you could never imagine.