It is always refreshing to see a young person working in the jazz genre. It is a legacy that must be preserved and continue to grow. One impressive addition to the mix is a beautiful 29 year old vocalist from Canada by the name of Khea Emmanuel. Her sultry alto combined with a classic jazz style makes her the perfect addition to our next Celebrity Jam.

Khea is the daughter of legendary Motown artist Leroy Emmanuel. Located on the Canadian side of Niagra Falls she has a natural gift and a stunning presence that suit the jazz genre so very well. Her grandmother was a singer and her grandfather a classical violinist. Her father tried to teach her guitar early in her life, but her passion was singing, so by 15 she had made her choice. When she listened to Sarah Vaughn she decided ‘this is what I want to do.’ Her selections are influenced by the 30’s and 40’s standards. 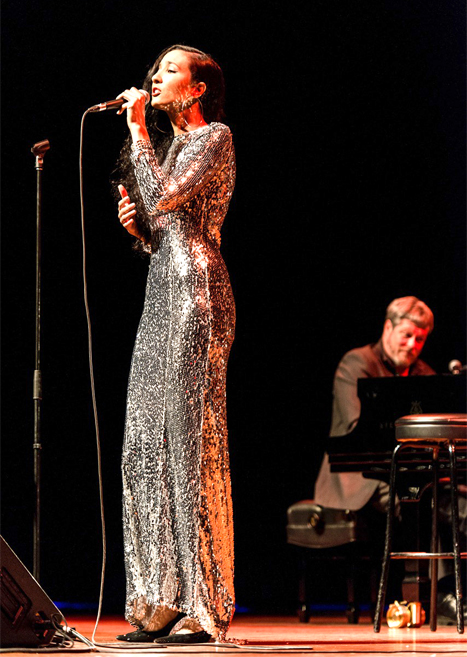 In addition to performing, Khea also composes and is currently recording a new CD with famed producer Bob Esty, who has produced for notables including Cher, Barbara Streisand, Bette Midler and Donna Summers.

This will be a full CD of originals written primarily by her producer. She explained it has some darker elements. When pressed she said there are classical strings, sultry, elements of other genres that will mix things up.

Her rendition of “Body and Soul” on her 7 song compilation is a Jazz standards CD. This is the newer project from three years ago, a musical shift she made when she realized that jazz was the love of her life. It was like a stamp.

Khea’s favorite part of her singing career is live performance. When I asked what her goals are she said she would love to perform around the world. She enjoys making people feel good. She strives to make her music fresh. Her goal is to inspire people. Her humble hip/cool vibe guarantees a jazz performance that you will wish to repeat again and again.

Khea’s mother and she are working on a tribute to their producer. They are holding a Red carpet Gala Event for Bob Esty honoring him and his legacy in Canada. Meanwhile, they fly regularly to LA for Khea to do her recording and performing. They are going to bring out her producer from LA to honor him for his work.

Khea will be performing in our next Celebrity Jam at Outdoor Resorts Palm Springs on Jan. 15, 2017. She will be joined with top artists in the jazz, blues, funk, groove, and Latin Jazz realms. For more information on Khea or to book her visit her website at www.kheaemmanuel.com.