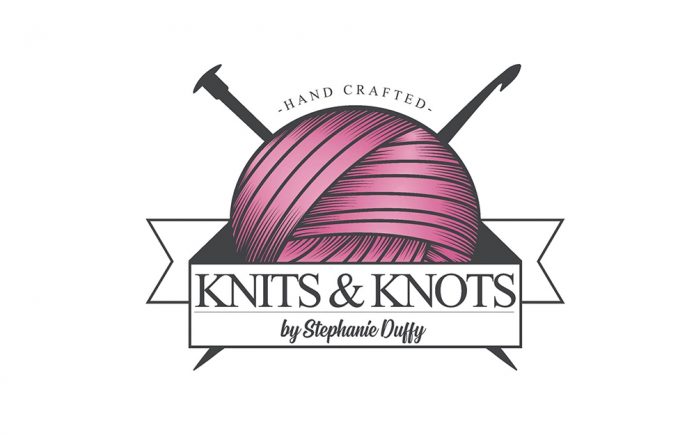 Learning a new skill can sometimes be challenging, but turning it into a profitable business is an entirely new impressive feat. Stephanie Duffy has taken her passion for crocheting to new heights as her business venture, Knits and Knots by Stephanie, gains a local following with her fun and quirky designs. Knits and Knots by Stephanie had its inception in 2013, when the mother of two found out she was pregnant with her second son.

“When I had my first son, no one told me about the hospital newborn photography. It was upsetting to me to have my firstborn and not being prepared for photos. I had seen so many babies with crocheted outfits for their first pictures, so I decided I was going to teach myself through YouTube and make my son an outfit for the newborn photos and from there everyone started asking to make them something. My ex-husband never let me work, so I thought this was the best opportunity for me to make my own money,” explained Duffy.

Duffy has been crocheting for eight years now without previous experience, but with the memory of having her grandmother crochet blankets, it inspired her to take it upon herself to learn on her own. 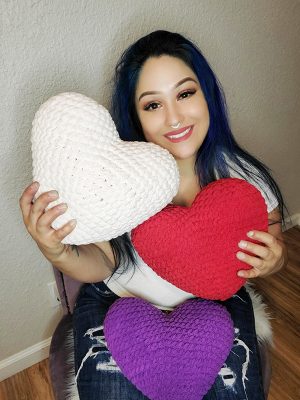 The services Duffy provides includes making photo props, clothing for all ages and different styles, purses, stuffed animals (or amigurumi—the Japanese art of knitting or crocheting small, stuffed yarn creatures), blankets, home decor, keychains, as well as custom orders that she has never done before. If there isn’t a pattern available to purchase, Duffy tries to recreate it with her crochet knowledge, as she always loves a good challenge.

“I’ve only officially written one pattern that is available for sale called the “Happy Pulpi”. It’s an amigurimi octopus for preemie babies. The Happy Pulpi has carefully-made octopus tentacles made to feel like their mother’s umbilical cord—comforting the baby and reducing the risk of the little one pulling the medical bits and bobs they may need and potentially cause serious problems for them. I have many designs I’ve created on my own, but I’ve never written out the pattern. These patterns/designs live in my head, which I’ll eventually write out to sell,” said Duffy.

Duffy’s creation process differs depending on what she is making. If she is recreating something with a purchased pattern, she will read the pattern and see what materials are needed such as which sized hook, the weight of the yarn, and how many ounces of yarn the item requires. She then takes her hook and yarn and makes a slip knot to start off the project. She then reads the pattern and works each stitch as written for each row until the project is completed.

“If it’s a beanie, for example, I would require an H Hook and three ply yarn and only one skein (one ball of yarn). I work a slip knot and will start with usually four single crochets, then close it shut and increase for the next 2-5 rows depending on the size of the beanie I’m making. Then after the increase, I would just work in rounds as normal without an increase for the desired length of the beanie to fit your head. Some people like to make it long so they can have a foldable brim and have a slouchy type of beanie,” said Duffy. 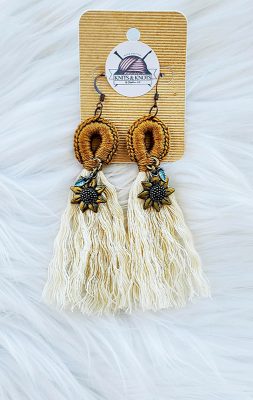 Crocheting has been an outlet for Duffy while she was in an abusive marriage before leaving two years ago. She has created Domestic Violence awareness products such as purple heart keychains that say “Survivor,” incorporating her Cricut machine to add the iron-on words to each keychain. Not only has she made keychains, but she also has made 10-inch purple heart pillows and t-shirts with the word “Survivor” in glitter writing.

In addition to her triumphant background, Duffy recently obtained her AA degree in Criminal Justice last May, and has been hired as a dispatch officer.

“Both my kids and my boyfriend are so very proud of me and always love seeing what I’m working on next. My favorite part of my business is making customers happy with what they have ordered and getting pictures sent to me with them enjoying their custom product. I hope to one day own a consignment store to sell all sorts of items,” stated Duffy.

To see the kind of products offered by Knits and Knots by Stephanie, visit her Etsy shop: https://www.etsy.com/shop/KnitsandKnotsBySteph.