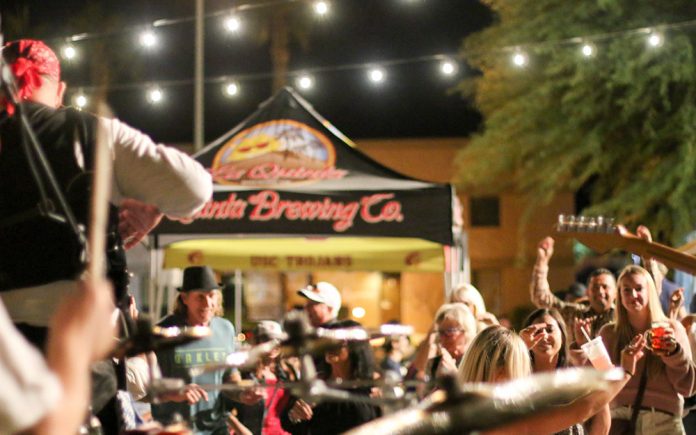 Six years ago this month, La Quinta Brewing Company opened. To celebrate they will have live music from six bands OGR Acoustic, Wyldsky, Captain Ghost, A. Rod and the Big Payback and Black Water Gospel, release new beers throughout the day and offer spectacular dishes from Chef Jeshua Garza of Kuma Catering and Cooking Thai by Benz in their much celebrated parking lot at 77917 Wildcat Drive Palm Desert, CA. You’ll also have the opportunity to purchase a limited-edition anniversary glass and t-shirt at a discounted price. The event is FREE and FAMILY-FRIENDLY!

In its six years of operation, the brewery has become a relevant live music venue, whether it be in the taproom or the warehouse. The popular 4,200 square foot facility’s burgeoning success in both craft beer production and entertainment has led to the development and construction of a new and significantly larger location on the south-west corner of I-10 and Cook Street in Palm Desert with a sizable taproom, outdoor beer garden, food service, and, undoubtedly, more live music options that includes an indoor and outdoor stage. The estimated date of completion is late 2020.

Coachella Valley Weekly spoke with Taproom Manager Mychal Renteria, who is a La Quinta High School grad, studied Music Industry Management at University of Nevada, Las Vegas (UNLV) and the booking agent for the Palm Desert location. With a stint as manager for Rock-Pop-Americana artist Manuel the Band, he has his finger on the pulse of the SoCal music scene and beyond. With his education, background and positive influence on the Coachella Valley beer and music scene, we can see why LQBC founder Scott Stokes ordained him Brewery Taproom Manager.

CVW: When did you realize LQBC was a viable music venue?

Renteria: “I think we became a viable music venue because we are consistent with hosting music. Artists knew that we always had music on Friday nights or that we did parking lot parties with live music. So they knew they could get booked for gigs.”

CVW: What can you share about the new facility being built with regard to live music & events?

Renteria: “The plan at the new location will be having an indoor and outdoor stage to host music. It’ll be a larger facility so we’ll be able to have full bands and be able to have bigger charity events. We currently are only allowed four parking lot events a year but at the new place we will not necessarily have a limit because we will own the building.”

CVW: Six years seemed to have whizzed by. What have been your favorite moments & accomplishments?

Renteria: “It’s crazy to think it’s only been 6 years. We’ve been fortunate enough to work on this new project and within the six years open two other satellite taprooms, one in Old Town La Quinta and one in Downtown Palm Springs. One of my favorite moments is a friend sending a picture of someone wearing our brewery shirt at in airport in Germany.”

CVW: If anyone knows anything about you is that you love Country music. Where does that passion come from?

Renteria: “I’ve always loved every genre of music. I was always the guy with mixtapes or burned CDs at parties. My current passion for Country music is the storytelling. The lyrics are something I can relate to in my life.”

CVW: The LQBC PD site is not necessarily conducive to live music. How have you made it work & why does every significant CV artist want to perform there?

Renteria: “I know it’s tough for musicians to come play at LQBC. We don’t have a PA system, nice lighting, the hours are difficult because we close early due to laws. But I think what brings artists back or wanting to play is the intimate feeling it brings. It becomes more of a listening room and artists can talk with patrons in a more private environment about the story behind their songs and really get to know the people they are performing to and help build a fan base.”

CVW: You have OGR Acoustic, Wyldsky, Captain Ghost , A. Rod and the Big Payback and Black Water Gospel booked to play the 6th Anniversary. What would you like to share about them?

Renteria: “I’ve known Lonnie Castro of OGR Acoustic for a long time. With his songs, you can just close your eyes and really see the picture he’s seeing. It’s really deep stuff but also engaging with the crowd. He tells a lot of dad jokes which never hurts, LOL! Wyldsky brings back that great Classic Rock sound that you just don’t see anymore. I haven’t had the chance to see Captain Ghost live yet but everyone says they put on a great show. I’ve listened to their album Into the Grave and it’s great. I can’t wait to see what they do on stage. Alex Rodriguez, A. Rod, is easily one of the most talented musicians I’ve ever seen. There’s nothing that guy can’t do, from singing, to playing the keys to shredding on guitar. It’s absolutely phenomenal to watch and listen to his craft. Black Water Gospel is an awesome, awesome band. Lance Riebsomer and David Morales were some of the first musicians to play the brewery in their earlier projects. It’s just great chemistry, watching them play.”