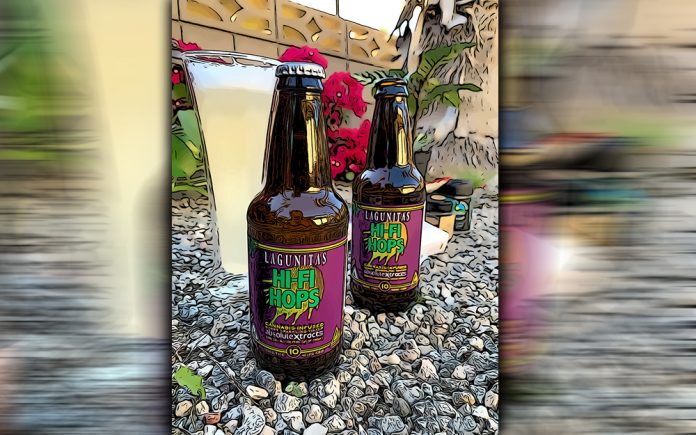 It’s the 19th day of quarantine, and I just spent my morning watching bootleg reiki videos on YouTube so I could open my cat Lucy’s root chakra. Not the sacral chakra, mind you, the crystal pendulum I’d used to read her energy levels determined that one was totally fine. According to the crystals Lucy’s throat chakra could have used a little adjusting as well, but there were more pressing matters to attend to than my cat’s spiritual health during quarantine. This is what social distancing and isolation was doing to us, the effects of having all the time in the world while being told we could not leave our home. My girlfriend, housemate and I had counted every tile in the kitchen (57), every weed in the back yard (63), had unsuccessfully tried to hack the dark web, and were about to begin past-life regression-therapy sessions with our pets when I remembered something. I had hidden away a rainy-day escape plan for moments just like these. I had weed-beer, two bottles of it, and it was time to review them.

Lagunitas Brewing Company was founded in 1993 by homebrewer Tony MaGee, growing and expanding to become the 5th top-selling craft brewery in the U.S in 2013. Lagunitas lost their craft brewery status in 2015, when Heineken international purchased 50% stake in the company. MaGee sold the remaining shares of his company to Heineken in 2017, giving them full control of Lagunitas while he remained on as CEO of the business.

Lagunitas has had long-standing associations with cannabis, getting into legal troubles and even being investigated by the ABC in 2005 for alleged weed dealing by employees. MaGee may have been lenient in punishing employees caught with cannabis, as he’s fond of quoting “It takes a lot of good weed to make great beer”. Many of their beer labels and advertising had the numbers “420” hidden in them, so it’s to the shock of no one that Lagunitas created their first cannabis-infused product in 2018. Dubbed Hi-Fi Hops, the series features a CBD forward (18:1 mg), a THC forward (10 mg), and a 50/50 (5:5 mg) blend of “AbsoluteXtracts” brand of oil in sparkling water. I had two bottles of the 10mg version, with my girlfriend Noni and roommate Kayla to help form opinions on the flavor, and effects of the drink. Intrepid cosmonauts all of us, we boldly put aside our other projects (aka TikTok videos) and got to work on drinking weed.

The girls split a bottle while I drank all of the other. We poured our servings into little glasses, tropical fruit and grapefruit in the nose. Noni took a tentative sip and immediately said it reminded her of Lacroix. “It tastes a little like baby coconut; citrus and pineapple even”, she pondered with furrowed brow. Kayla agreed that it tasted citrusy, taste and nose both having notes of grapefruit to her. Not IPA drinkers, the girls were describing the different notes of flavor imparted by hops. While I suspect that this beverage uses dry-hopping to add flavor, the use of hop extracts seems intuitive along with the use of the THC oils. “It’s hoppy up-front and weedy in the end”, continues Noni, “but both very subtle”. Kayla adds “Subtle the way Lacroix is. Like, sparking water with one marijuana in it”. After a few sips, we were able to identify the main flavor as being reminiscent of a musky papaya fruit. 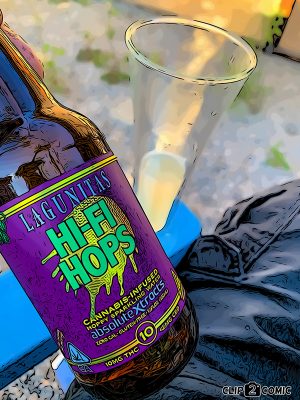 Hi-Fi Hops was lightly carbonated and less effervescent than soda or beer. It flattened out before either of the girls had finished their half-serving each; Kayla didn’t notice a discernable change in flavor, but Noni felt it tasted less pleasant without the carbonation to sharpen the flavor. The added oils gave the beverage a slightly thicker mouthfeel than a Lacroix would have, almost having a mouthfeel similar to Red Bull. All in all, a pleasant drink with the flavors you would expect from carbonated water flavored with hop and THC oils.

About 15 minutes after my first sip I began to feel the effects, a slightly fuzzy feeling that amplified into a body high soon after. The three of us enjoyed sitting in the backyard of our shared quarantine home, enjoying a soft breeze and the way it rustled the palm trees overhead. Although Kayla and Noni had each ingested only 5 milligrams of THC in their servings, it was still enough to give a soothing and pleasant sensation. I ingested a whole 10 mg serving, and felt a deep sense of relaxation, not entirely different from the way that muscle relaxers effect. Suitably enhanced and enjoying the weather, our adventures in bootleg reiki momentarily forgotten, Hi-Fi Hops was the perfect drink for a lazy quarantined afternoon.