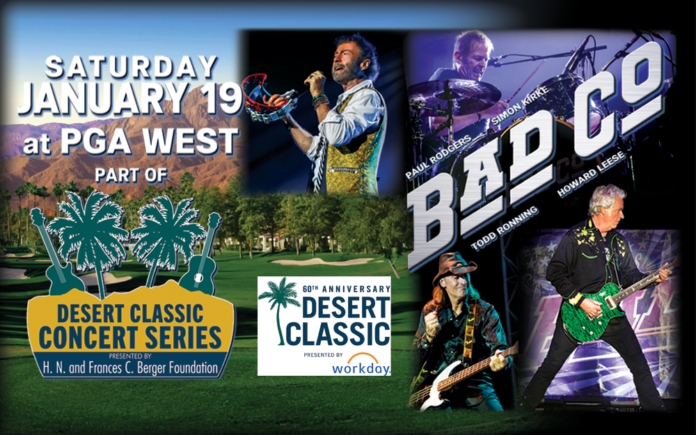 This Saturday, January 19 at 5:00pm at the Stadium Course at PGA West

Bad Company has had a successful career that began in 1974 when they released their self-titled album that went 5 times platinum and spawned hits like “Can’t Get Enough,” “Ready For Love,” “Rock Steady” and “Movin’ On.” That album was followed by Straight Shooter, that went triple platinum and produced the hits “Feel Like Makin’ Love,” which was a Top 10 hit and Grammy nominated, and “Shooting Star.” Run With the Pack followed in 1976 and was the band’s third consecutive platinum selling album and then in 1979 came Desolation Angels, which produced the classic hit “Rock & Roll Fantasy.”

Frontman for the band, Paul Rodgers, has also had a successful career with his bands Free (pre-Bad Company), The Firm (with Jimmy Page), as well as a solo career, and he also fronted the band Queen for a bit after Freddie Mercury passed.

Rodgers recently released a CD/DVD titled “Free Spirit,” which celebrates his music with Free and was recorded live at London’s Royal Albert Hall on California based record label Quarto Valley Records Icons Label, which hit #2 on the Billboard chart for 3 weeks. Label president Bruce Quarto, created the Icon label, with Rodgers being the first icon on it.

Rodgers took time over the weekend to chat with me about his past year and what he has in the works for 2019.

“I did a tour in Europe this past year called Free Spirit, which was the music of Free and I really wanted to bring it to the States,” shared Rodgers. “Jeff Beck, Ann Wilson and Deborah Bonham jumped on board and the tour here in the States was called the “Stars Align Tour.”

I asked Rodgers if they all got to jam together.

“Actually Deborah Bonham and Ann Wilson came up and had a little jam session with me on “Rock & Roll Fantasy.” Ann Wilson is such a powerful singer and a lovely lady and Deborah actually came along with us on the Free Spirit tour in Europe and she got a standing ovation every night. It was quite amazing.”

Deborah is the late John Bonham’s (Led Zeppelin) sister and Jason Bonham’s aunt. Jason will be performing with Sammy Hagar on Friday night at Desert Classic.

“The Desert Classic show will be the first show of 2019 for Bad Company and it is one of only 10 selected shows that we will be playing this year and 3 of those will be with ZZ Top in Texas celebrating their 50 year Anniversary and 3 of them will be with Lynyrd Skynyrd as they finish up their Farewell Tour,” shared Rodgers.

I mentioned to Rodgers that I had seen Bad Company, Lynyrd Skynyrd and ZZ Top all on the same bill more than once back in the 1970s. I wondered what it was like playing with those bands all these years later.

“It’s fun. Lynyrd Skynyrd have such a great show and we love to go out and play with them, we’re compatible in lots of ways and we’re really good friends and they’re like family. We’re not as close with ZZ Top, but I think if you put a Bad Company, Lynyrd Skynyrd and ZZ Top album on, that they are all in the same ballpark as we all have that same blues, rock feel with soul,” shared Rodgers.

I asked him if he was a golfer to which he said no. So I asked how this Desert Classic gig came about. 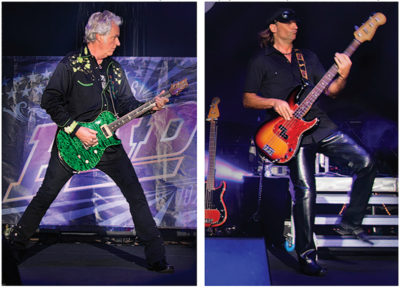 “Someone contacted our agency and asked if we’d like to play and we said ‘yes, absolutely.’ Being invited to play for the 60th Anniversary is very dear to us. I have a lot of respect for the late Bob Hope who started this event many years ago to give back locally to charities. He was such a special person and great performer. He went out to entertain the troops, wherever they might have been, and during Christmas. Not everyone would do that.”

Rodgers shared a bit about the recording of the Free Spirit disc. “We recorded the Live album at London’s Royal Albert Hall and the atmosphere was so beautiful in there you could cut it with a knife and put it in a bag and take it home. I really wanted to bring the music of Free to the people. Have the music recognized more because they’re kind of like the most famous unknown band in the world. A lot of bands come up to me and tell me that they’ve really been influenced by them,” shared Rodgers.

“When I came to the States my management told me that the people here really wanted to hear the Bad Company material, so I merged the two together and they really do complement each other well. I was able to create a compelling set when I combined the music of both bands when I toured here last year. Brian May told me that Queen was very influenced by Free and that Freddie used to come to our shows,” shared Rodgers.

“Well, I mean what can I say, it’s absolutely wonderful. I mean I love Robert. I met him years ago in England when I was on tour with Free before Led Zeppelin was a band. We met afterwards and had a cup of tea and he was telling me ‘I’ve been invited to come down and jam with this guy Jimmy Page and he’s a big session musician have you heard of him?’ and I said ‘yes’ chuckling and he said they’ve offered me 15 quid a week or a percentage’ and I said ‘you should definitely take the percentage,’ and he did. Robert’s really never changed he’s still the same guy I knew back then, a rambling hippy,” Rodgers said with a warm-hearted chuckle.

So who are some of the people in the industry he most respects or listens to?

“I loved Amy Winehouse, even though she’s passed, she was one of my favorites. She was such a lovely singer. What ever happened to her band? They were so good too. As a teenager I listened to a lot of soul like Otis Redding, John Lee Hooker, Alvin King. I can still put those records on and get a recharge because they were so great. I also like Adele, she has nice chops.”

Even though Rodgers will be doing fewer shows this year, it doesn’t seem like he’ll be slowing down that much. I asked him if retirement ever enters his mind?

“Yes,” he laughed. “Every time I’m delayed at an airport and I have to spend the night somewhere I don’t want to be, but then as soon as we get on stage my whole mood changes. Last year we promised ourselves we would cut back on shows, but we didn’t so this year we’re going to because I also want to spend some time creating new music and not just playing shows. So I really want to move forward creatively. I’m working on a bunch of new songs and I can’t wait to have the time to get the guys in the studio to record them. They will be Bad Company songs.”

Rodgers says that there is a bit of a difference when he does solo shows from when he performs with Bad Company.

“When I do solo shows it’s a mix of all the music I’ve done with all my bands; Free, The Firm and Bad Company and my solo blues albums, but when I’m with Bad Company I try to keep it strictly to those songs. But having said that I just started slipping the Free song “Alright Now” into the mix and the fans seem to really enjoy it.”

People connect with the hit songs of Bad Company. Having the song “Alright Now” included also resonates with the fans. Rodgers also has one of the best power voices in rock, so being able to see him with Bad Company is not to be missed. You can still get tickets – Daily tickets ($30) include concert, week-long tickets ($75) and all other tournament information is available at the Desert Classic’s website, www.Desert-Classic.com.