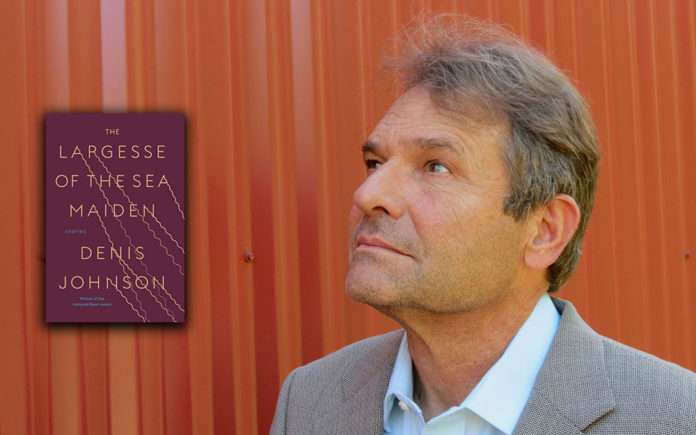 —–
The Largesse of the Sea Maiden
by Denis Johnson
Stories
—–

How do we embrace our own mortality?  It is a challenge to accept that we will indeed pass from this earth.  It is equally challenging to live fully, realizing each day is a precious gift.  In Denis Johnson’s story collection, published posthumously, The Largesse of the Sea Maiden (Random House, 224 pages) reflects the beauty and the banality of life and death.

Author Johnson is a beloved storyteller and The Largesse of the Sea Maiden was finished shortly before his death last May.  It is Johnson’s second collection of short stories.  His first, Jesus’ Son, 25 years ago, elevated Johnson into literary stardom with its gritty humor and profound honesty.

The Largesse of the Sea Maiden captures Johnson’s unique voice, attitude and fearlessness.    Five stories make up the collection and each has a brush with death as if it is the most natural thing in the world—which, of course, it is.

The title story “The Largesse of the Sea Maiden” features a 63-year-old gentleman who travels to New York for an achievement award recollects his wives, friends and some of the treasured moments in his life.    At one point, an ex-wife calls to tell him she is terminally ill, but as she talks he is unsure which wife it is—first, second?

The character reflects: “I note that I’ve lived longer in the past, now, than I can expect to live in the future.  I have more to remember than I have to look forward to.  Memory fades, not much of the past stays, and I wouldn’t mind forgetting a lot more of it.”

“The Starlight on Idaho” features a man named “Cass” who while in rehab tells his story through personal letters to friends, family, Satan and the Pope!  Cass describes the mind-altering effects of Antabuse used to help him detox.   He wonders if he is Jesus Christ and what Satan is trying to communicate to him.  The personal stories told in group sessions depress him, and make him feel angry and powerless.

As Cass debates his life he remembers his father telling him: “I put down one foot on the Road of Regret and set out on my journey.” Cass also admits that his life is “The amazing truth.”

In the story “Strangler Bob,” a young 18 years old man is given the nickname “Dink” while serving 41 days in the county lock-up.   He meets “Strangler Bob” who tells him and his cell pals that each one of them will murder someone before they die.   The wayward teen and the others, whose crimes are mostly minor, reject Bob’s notion.  Years later, Dink realizes that Bob’s prophesy has in fact come to fruition — including for him.

In “Triumph Over the Grave,” a caregiver reveals his own successes and failures as he deals with the loss of his charges.  He recounts the time when as a professor he took his graduate students to meet an acclaimed author who was seeing ghosts.

The final of the five stories is “Doppelganger, Poltergeist” about a writing professor who is enamored with a younger poet and gets entangled with his theory that Elvis Presley’s stillborn twin brother Jesse is still alive.  In his on-going madness, the poet is haunted by the compelling evidence and confesses that he has indeed exhumed the small coffin, 60 years old since buried, to see if the infant twin child is within.

All five stories are told in the first-person.   Johnson writes these tales with the honest and blatant reality that death is inevitable and an important part of our own narrative.  It is impossible to run away or hide from death.

These stories share death as perfectly natural.   Death is not to be feared nor is it a mystery.   Death is far less bizarre than the lives that we live.  It is hard not to imagine Johnson working on this final collection of stories.  I get the impression that Johnson came to terms with his life and death.

Denis Johnson will always remain one of my favorite authors.  His creativity, bold, and brave prose are a voice I will surely miss.  However, he has left readers with a great gift.  His literary work will continue to inform and entertain readers about our human condition, frailty and mortality.

The last line in “Triumph Over the Grave,” Johnson writes:  “The world keeps turning.  It’s plain to you that at the time I write this, I’m not dead.  But may be by the time you read it.”