The support from the entertainment industry, the media, both social and traditional, was overwhelmingly positive.  An auto-bot was even in place to correct anyone tweeting her as him.  Two of her children publicly tweeted their support, as did the White House. In her own words, Jenner shared, “I’m so happy after such a long struggle to be living my true self. Welcome to the world Caitlyn. Can’t wait for you to get to know her/me.” GLAAD president and CEO, Sarah Kate Ellis, publicly messaged, “By sharing her journey with the world, Caitlyn Jenner is accelerating the acceptance of transgender people everywhere and reminds us all how important it is to live as your most authentic self.”

While Jenner will receive the Arthur Ashe Courage Award at the 2015 ESPY Awards in July (an award granted to people “possessing strength in the face of adversity, courage in the face of peril and the willingness to stand up for their beliefs no matter what the cost”), there is no doubt, that a percentage will silently and not so silently look at all of this with dismay, fearful concern and even contempt. And based on statistics, some have and will respond violently.

According to the Office for Victims of Crime (www.ovc.gov), statistics documenting transgender people’s experience indicate shockingly high levels of sexual abuse and assault:

HATE CRIME:  According to the National Coalition of Anti-Violence Programs (NCAVP), acts of hate violence, such as harassment, stalking, vandalism, and physical and sexual assault, are often supported by more socially sanctioned expressions of transphobia, biphobia, and homophobia and are intended to send a message to LGBTQ communities. It goes on to state that many LGBTQ people also face substantial bias because they belong to other traditionally marginalized groups such as race, class, incarceration history, immigration status, or ability.  In the NCAVP 2009 report on hate violence, 50 percent of people who died in violent hate crimes against lesbian, gay, bisexual, transgender, and queer (LGBTQ) people were transgender women; the other half were male, many of whom were gender non-conforming.  Sexual assault and/or genital mutilation before or after their murder were a frequent occurrence.

FAMILIES AND CHILDREN: In February, GLAAD released its “Accelerating Acceptance” report, which surveyed thousands of Americans on their feelings toward the LGBTQ community from their stance on marriage equality to their level of comfort with LGBTQ people in different settings of everyday life.  “The results, presented in cold, hard statistics, were a sobering reminder that despite a general move toward embracing LGBTQ civil rights under the law, there remains a layer of uneasiness and discomfort with LGBTQ people for much of the American public.”

Roughly a third of non-LGBTQ parents polled said they would be uncomfortable sending their children on a playdate at the home of an LGBTQ parent, and nearly half said they would be uncomfortable bringing their child to the wedding of a same-sex couple. For transgender parents, the reality is even more unwelcoming, with the rate of discomfort jumping to 40 percent if a playdate were to take place in one of their homes.

“These statistics rocked me, and say nothing of the troubling views many Americans hold toward children who display gender nonconforming behaviors,” stated the GLAAD president. “For a truly accepting society, all parents should be supportive of both their own children and other families in their community.With the country now at the doorstep of full marriage equality, these are the types of negative sentiments and prevailing attitudes that we must work to overcome.  Closing the gap on full acceptance of LGBTQ people will not come from legislation or judicial decisions alone, but from a deeper understanding and empathy from Americans themselves.”  www.glaad.org/blog/glaad-president-accelerates-acceptance-lgbtqfamilies-around-country

WORKING TOWARD A SOLUTION:  There are some important events coming up here in the Coachella Valley that will not only be educational and informative, but historical. 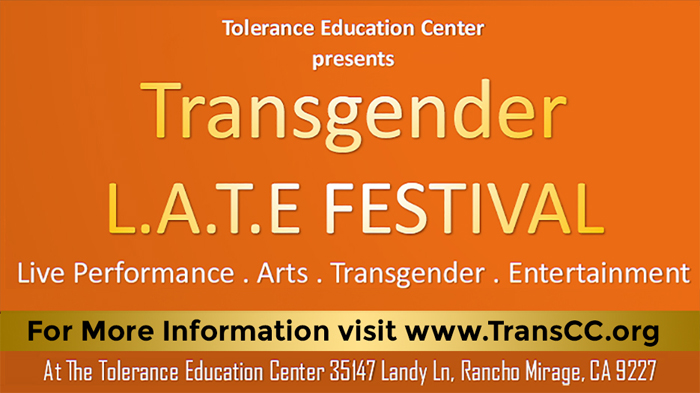 Opening will be a Q & A about Transgender life in India with Transgender Activist Kalki Subramaniam from the Sahodari Foundation.

Short films and documentaries will include:

Ending will be a Q & A about Transgender life in Uganda by director of The Pearl of Africa, Jonny von Wallstrom.  Wallström is a Swedish cinematographer turned self-shooting director. His debut documentary film Zero Silence was official selection at Sheffield Doc/Fest 2011, a film that captured the Arab Spring before, during and after the 2011 revolutions. His documenting of the struggles of transgenders in Uganda and Russia are nothing short of riveting.

Tickets can be purchased, while available, at www.transcc.org.

In hopes of deterring the growing number of trans-youth suicides, Transgender Community Coalition and TDOR Palm Springs have initiated the first Trans-Pride event in Coachella Valley.  With the main focus on Trans-Youth and their struggles to be accepted for who they are, the event will celebrate and promote pride of individual uniqueness. There will be face painting for the children, fresh fruits and water, a grill for food, music, songs, and proclamations recognizing Trans-Pride from cities within the Coachella Valley. At 2 pm, the local governments will come and present their proclamations showing their support for this cause.  Transgender, Gender Non-Conforming people and their allies are all welcome.

“This is an opportunity to educate families on a large scale about acceptance and emotional support of their children and friends, and enabling them to be the person they were meant to be in hopes of averting youth suicide,” shares Thomi Clinton, event founder and coordinator.

(June 28th, is also the anniversary date for the Stonewall Riots that sparked the human rights movement in 1969)