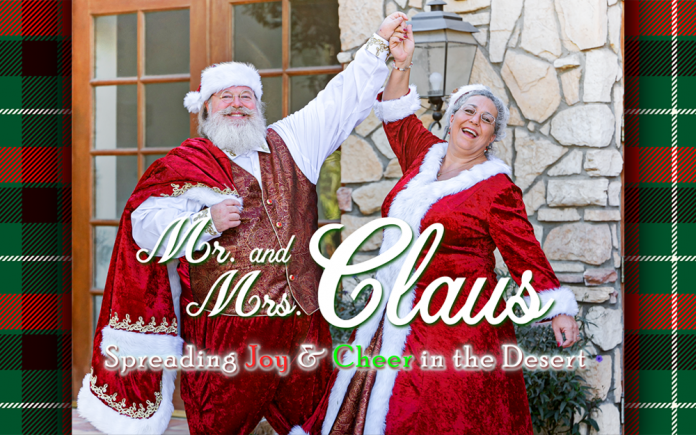 Christmas is approaching fast, and two very important figures that embody the season of joy and giving are St. Nick and his missus. La Quinta residents Gregory and Laura Little have been in the Santa game for over 10 years, dressing up in the iconic red costumes and making appearances at various fundraising events and private parties to bring a little bit more magic to the holidays. 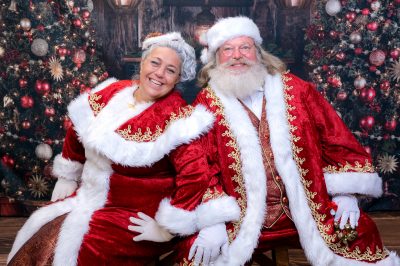 Although the couple have been recognized numerous times while out in public donning their Christmas apparel, these local celebrities have reached an even wider audience than ever before. The Littles have recently gone viral on TikTok when user @ameerabelle posted a short clip of Gregory and Laura in full regalia driving in their bright green Jeep loaded with toys and wrapped presents. The video was uploaded on December 4 and has now accumulated 870K views and counting.

“We had no idea we were even on TikTok until a former coworker sent me the link,” shared Laura. We got our first hint that something was up driving home after a Santa event when a car full of excited young people pulled up next to us, shouting, ‘Oh my gosh, that’s TikTok Santa!’ At the time, we had no idea what they were talking about, but when we got home, we saw the link.” 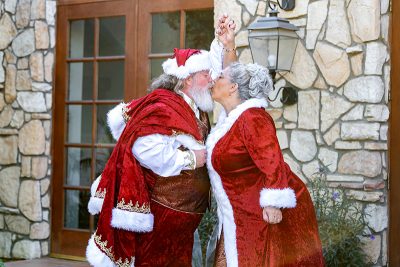 Gregory added, “Since then, many people who have come up to us say they saw us on TikTok. It has been such an unexpected and cool experience.”

Last year, COVID cases were surging throughout the country, which prevented any special events or public appearances from taking place. Since the children could not come to Santa, Gregory and Laura came up with the idea to take Santa to them.

The couple decided to decorate Laura’s green Jeep with festive packages and set up socially-distanced outdoor visits with Santa and Mrs. Claus. Santa even publicly got his COVID test at the new Rancho Mirage testing site on opening day and the couple worked with the YMCA of the Desert to film story read-alouds to send to children. 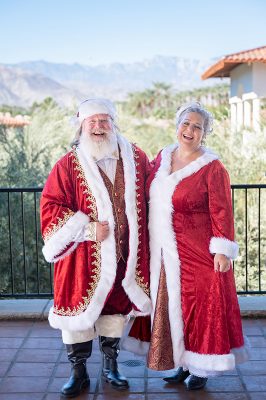 The Jeep was so popular last year that they recreated it for 2021, using it as Santa’s primary mode of transportation to in-person events that have come back this year. Now halfway through Santa season, the Clauses are back in full swing and have already made their rounds at various tree lighting ceremonies, including Westin Mission Hills, Cathedral City, and the Palm Springs Aerial Tramway. Mr. and Mrs. Claus have participated in several events for the YMCA at their outreach location in The Shops at Palm Desert, Sacred Heart Preschool, My Gym, and Mariposa Parent Child Workshop Preschool in Indio.

“Our visits include a mix of nonprofit and community events. We enjoy working with Bridget Miller Photography year after year for family photos. We’ve seen some of the same families for many years,” explained Gregory. “But, it has definitely evolved this year, with parties at country clubs, a booking agent and even TV appearances.”

There are still some planned appearances scheduled for the rest December—the majority of them being private events. The last open-to-the-public event to visit with Santa and take your own photos will be on December 18 from 10 a.m. to noon at Jadabug’s Kids Boutique in La

Quinta. However, as Santa also works as a sound engineer, there may be a “Sound Santa” sighting. Pro Tip: look for the man in red and his wife at a performance by the Ghost Notes on December 18 at Big Rock Pub in Indio.

Embodying the roles of these beloved characters is something that the Littles take very seriously, and even the smallest details matter. Laura always reminds Gregory to put his Santa gloves on or to take off his sunglasses and switch to the traditional frames. To get into the mental mindset of Santa, Gregory doesn’t find it too difficult to be jolly, as he tries to reflect that in his personality all year round along with a calm disposition.

“You have to meet people’s expectations or exceed them. The character of Santa has a lot of tradition. When meeting kids, we want to make sure we are honoring the Santa persona because there is so much magic to it. When meeting with adults, it tends to be a lot more relaxed and casual,” stated Laura.

This year, the Littles are sporting new Old World-style Santa and Mrs. Claus costumes designed specifically for them. After 2020, the couple were looking to replace their costumes, as Santa had worn his out and Laura was never quite satisfied with Ms. Claus’ “look.”

Through their connections with a costume designer in Hollywood, they were referred to Amy Mazzaferro, a costumer for the LA Opera, who had availability to take a commission due to the dark stage at the opera. They collaborated over Zoom, then drove to LA for multiple fittings. The resulting product was ornately decorated costumes with a classic style that complement each other as a set. 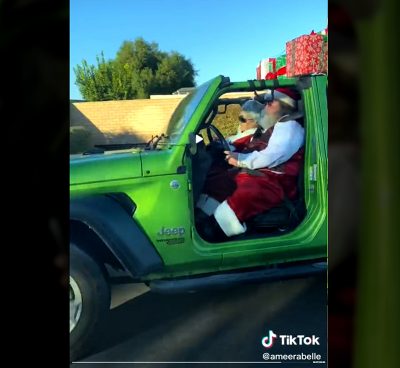 There are some difficulties that come with the responsibility of bearing the Claus name—whether it be growing out and maintaining Santa’s beard or spraying on some gray coloring for an authentic Mrs. Claus hairdo. Gregory and Laura also have full-time jobs that they need to schedule their Santa appearances around.

“The beard thing wasn’t too difficult for me because my kids have already made my hair turn white. But balancing the Santa look at a corporate job can get difficult,” shared Gregory. “I am very grateful to this community. I love living here, and want to do right by the community. I love making people smile and bringing cheer. It’s very important to me that I do my best not to let people down.”

“The most rewarding part for me is when we meet a child and they just start having conversations with us. Being able to interact with them and bring some magic into their life is so wonderful,” said Laura.

The Littles are discussing making Santa and Mrs. Claus their retirement job and will continue to embody their Santa personas for as long as they can together as a team. They are also planning on adding another costume option or two in upcoming years.

For booking inquiries or more information on the Littles’ Santa services, email Laura directly at laurahuntlittle@gmail.com.