Loretta Lynn has been making music for more than half a century. She’s a rule-breaker, a trailblazing feminist in a spangly ball gown, but first and foremost (and most famously), she’s a coal miner’s daughter.

Of course, she charts her beginnings in her best known song of the same name. Loretta Webb was born during the Great Depression, in a cabin in Butcher Holler, near Van Lear, Kentucky.  Her father paid the mid-wife by giving her their milk cow.

The cabin was so primitive, old newspapers, catalog pages and movie magazines were used to patch cracks in the walls. A picture of actress Loretta Young was hanging over her crib, and that’s how Loretta got her name. The second eldest of eight children, she grew up poor and hungry, but happy. Music was a constant and inexpensive form of entertainment.

As a teenager, she met Oliver “Doolittle” Lynn, a 21 year old soldier, just returned from World War II.  Loretta married him a month later. Less than a year after that, they left coal country for better job opportunities, settling in Custer, Washington.  By the age of 20 she was the mother of four, two boys and two girls.

A few years into their marriage, Doolittle gave her an acoustic guitar as an anniversary gift. (She would have preferred a wedding ring).  He insisted she was better than any singer on the radio, and encouraged her to play. She taught herself some chords, and pretty soon, she began writing her own songs.

Before she knew it, Doolittle booked her into Grange halls and Honky Tonks, she proved so popular she was signed to the tiny Zero record label in 1960.  One of her first compositions, “I’m A Honky Tonk Girl” was released as a single. Leaving her kids with her mother, Loretta and Doolittle, criss-crossed the country by car, popping into Country Western radio stations and convincing disc jockeys to play the record.

Weirdly enough, their unconventional strategy paid off. Jaded disc jockeys were first won over by Loretta’s beguiling brand of quirky naivete’ and agreed to play the song. But her music really did the talking, and the song gained traction, reaching #14 on Billboard’s Country charts.

Soon she was performing at the Grand Ol’ Opry, touring with the Wilburn Brothers and signing a contract with Decca Records. At the time, there were really just two popular female singers in Country Music, Kitty Wells and Patsy Cline. Patsy took young Loretta under her wing. Tragically, Patsy was killed in a plane crash while Loretta was pregnant with her twins, Peggy and Patsy.

Throughout the ‘60s Loretta (and to some extent, Tammy Wynette), provided a blueprint for female Country singers to follow. She wrote songs from her own experience that resonated with every day folks. She tackled real life issues like the Vietnam War, (“Dear Uncle Sam”), feminism, (“You Ain’t Woman Enough”) and infidelity (“Fist City”). She was the first woman in Country to have both written and performed a number one song.

In the ‘70s, she became even more controversial, writing and recording songs like “Rated X” and “The Pill.” Five of her songs were banned from Country radio, but that only increased sales. For Loretta, no topic was off limits.

Her most personal song, “Coal Miner’s Daughter,” served as a template for her autobiography of the same name, which in turn, became a wonderfully winning film.  Loretta announced to Johnny Carson that Sissy Spacek would be playing her, before the part had ever been offered. Sissy was reluctant, but ended up doing her own singing in the movie, as did Beverly D’Angelo, who portrayed Patsy Cline. A critical and commercial success, it was nominated for six academy awards, winning Sissy the Best Actress award.

As the years progressed and Country music became more “Country-politan,” Loretta still managed to top the charts, but she also endured some hardships. Her son, Jack Benny died in a drowning accident in 1984. Twelve years later, her beloved husband Doolittle passed away after a serious illness.

By this time, she had slowed her recording career and mostly concentrated on touring. Aside from recording with Tammy Wynette and Dolly Parton as the Honky Tonk Angels in 1993, she rode out the decade without releasing any new music.  In 2000, she released Still Country. The single, “Country In My Genes” reached the Top 10, making Loretta the first woman in Country music to chart singles in five decades. But she wasn’t done making history.

The Garage Blues band White Stripes had been covering “Rated X” for a few years when Loretta connected with Jack White. He convinced her to let him produce her new album. The result was Van Lear Rose, released in 2004.  Loretta wrote or co-wrote every song. Not only did the album shoot to #4 on the Country charts, it reached #27 on the Pop charts. The White Stripes connection introduced her to a much younger audience. Reviews were glowing, nominated for five Grammys, it won two.

Loretta Lynn has had 10 #1 albums, 16 #1 singles, and 50 Top 10 singles. She’s won four Grammys and seven American Music Awards. She was inducted into the Country Music Hall Of Fame in 1988, and was the first woman in Country to get a star on the Hollywood Walk Of Fame. She is also a recipient of the Kennedy Center Honors, awarded by the President in 2003. In 2013, she received the Presidential Medal Of Freedom. Anyone would think now would be the time to relax and rest on her considerable laurels.

But in 2007, Loretta began her most ambitious project, recording a series of albums to be released over the next several years. She enlisted her daughter, Patsy Lynn Russell, and another Country scion, John Carter Cash, son of Johnny and June, to produce the sessions. When Loretta toured with Cash/Carter Family in the late ‘60s, she would often change young John Carter’s diapers. Now they all convened at Cash Cabin recording studios in Hendersonville, Tennessee. 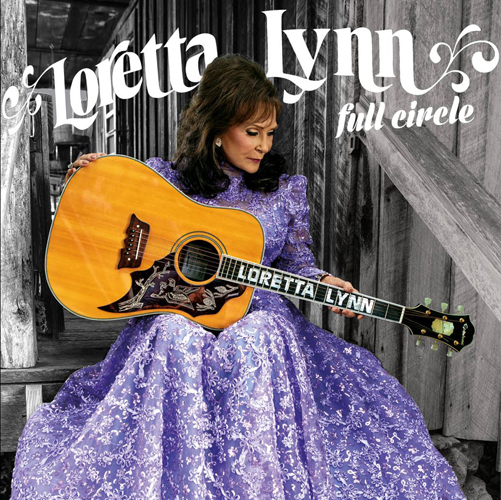 Full Circle is the first album to be released from the sessions. The record opens with a snippet of conversation, asking Loretta about the first song she ever wrote, “Whispering Sea.”  Her answer is candid, sharp and funny. Honestly, they could release a whole album of her reminiscences and her fans would probably eat it up. But she wraps up her anecdote by commanding “let it rip, boys,” and the band launches into a new recording of “Whispering Sea.”

For a nascent effort, “Whispering Sea” is a pretty powerful song. A mournful waltz accented by lonesome pedal steel, swooping fiddle and a walking bass line, the lyrics speak to a familiar ache of a secret broken heart. “Oh how I love him so, no one will ever know, no one but the drifting, whispering sea.”

Loretta has never really strayed far from her Appalachian roots. On Full Circle, she tackles three seminal songs steeped in Mountain tradition, “In The Pines,” “Black Jack David” and “I Never Will Marry.” “In The Pines,” also known as “Black Girl” and “Where Did You Sleep Last Night” dates back to the 19th century. In the 20th century it was popularized by both Folk/Blues legend Leadbelly and Bluegrass stalwart Bill Monroe. Even Nirvana took a pass at it during their MTV Unplugged appearance.

For Loretta, it’s a song she sang to her younger siblings, children and grandchildren. This version is spare and economical. A mournful two-step rhythm is underscored by upright bass, sprightly mandolin and rippling banjo notes.

Loretta puts her stamp on two celebrated pop songs, “Secret Love” and “Always On My Mind.” The former, was a huge hit in the ‘50s for Doris Day, when she starred in the musical “Calamity Jane.” (Ironically, at the time, it also served as a quiet anthem for closeted homosexuals). Of course she added some twang to this torch song, giving it the patina of a classic Country weeper.

The latter adds a distaff spin on the macho mea culpa originally made famous by Willie Nelson. Bee-stung guitar, somber pedal steel and lachrymose piano notes add to the gravitas. Willie’s version always felt like a cavalier justification for philandering. Loretta seems genuinely repentant, perhaps for the years on the road that kept her from her family.

Of course, the best tracks here are the ones written by Loretta herself. “Who’s Gonna Miss Me” is powered by loping acoustic guitars, tinkly piano, tart mandolin fills and lonesome pedal steel.   Co-written by Lola Jean Dillon, the tune actually wonders what kind of legacy she will leave behind.

The rollicking “Everybody Wants To Go To Heaven” is the LP’s most winning number. Barrelhouse piano propels the action, along with soaring pedal steel, fleet electric fretwork and sawing fiddles. Clever lyrics reflect on the ultimate spiritual conundrum; “I long for the day when I’ll have new birth, still I love livin’ on this earth/Everybody wants to go to heaven but nobody wants to die.”

She even revisits “Fist City.” Not so ironically, her down-home perspicacity still resonates. Lines like “I’m not sayin’ my baby’s a saint-he ain’t, and he won’t cat around with a kitty/I’m here to tell you gal to lay off of my man if you don’t wanna go to fist city” are by turns, sharp, witty and articulate.

Other interesting tracks include the devout “Wine Into Water” and the Honky Tonk two-step “Band Of Gold.” On the album’s final two songs, Loretta partners with a couple of famous admirers, Elvis Costello and Willie Nelson.

“Lay Me Down” is a stark take on mortality. The melody shares some musical DNA with Ferlin Husky’s classic “Wings Of A Dove.”  Over a bare bones arrangement of acoustic guitars, mandolin and upright bass, these octogenarian legends take stock of their lives. Despite the trials and tribulations they have endured, each affirms “I’ll be at peace when they lay me down.” A quiescent finish to a wonderful record.

Like Johnny Cash and Tom Jones, Loretta Lynn is experiencing a career renaissance. With Van Lear Rose and now Full Circle she confirms that she is a powerful voice with a lot left to say. Luckily, she’s allowed us to listen.