That’s Lori McKenna, doing what she does best, mining the variables of long-term relationships, whether it manifests as loneliness, confusion, intimacy or desire. Sometimes just a couple of lines evoke all of the above. The song, “Wreck You,” is the first track off her new album, The Bird & The Rifle. 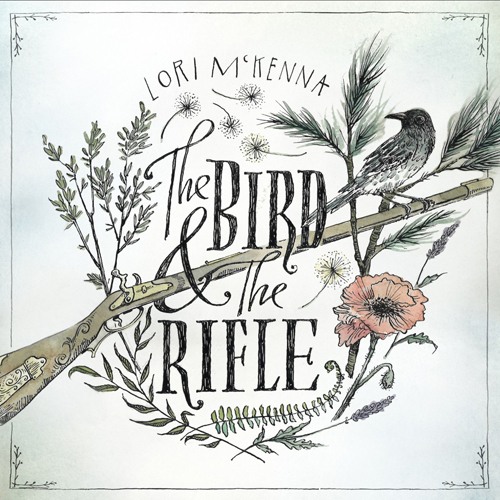 Although she has released nine other critically acclaimed records, chances are, you may have never heard of her. But if you’re a fan of country music, you’ve probably heard the phenomenal songs she’s written, recorded by artists like Faith Hill, Tim McGraw, Keith Urban, Carrie Underwood, Alison Krauss, Rae Lynn, Reba, Sara Evans  and Hunter Hayes.  In 2015, Little Big Town took her song “Girl Crush” to #1, netting her a Grammy for Best Country Song.

Lori McKenna’s career has taken a circuitous path.  Christened Lorraine, after her Mom, she was born in 1968, the youngest of six in a large, Irish Catholic family.  Her mom passed away when she was just seven.  A year later she met Gene, the man she would marry, when both were attending the third grade.  High School sweethearts, they married early and started a family in their home town of Stoughton, Massachusetts.

She had always sung and written songs, but she didn’t begin to pursue the dream of performing until she was in her late 20s. She found encouragement in the nurturing Folk/Coffee House scene of Boston in the late ‘90s.  Initially, she haunted Open Mic nights, but very quickly she rose up through the ranks, following in the footsteps of like-minded artists like Aimee Mann, Tracy Chapman, Jonatha Brooke and Patty Griffin. Pretty soon, she was playing local clubs.

Recorded in 1998, Lori’s quietly commanding debut, Paper Wings And Halo arrived in 2000, released through the tiny Orchard Records label. A prolific writer, she signed with the Signature Sounds label and returned 20 months later with Pieces Of Me.  By 2004, she was back with the raw intimacy of Kitchen Tapes, which included 11 originals and an affecting cover of Radiohead’s “Fake Plastic Trees.” Three months later she doubled down with Bittertown. Her most assured effort to date, it rocked a little harder and added trace elements of Country to her Folk patina.

Lori’s publisher had begun sending her songs out to some big name artists. Country superstar Faith Hill responded immediately and recorded three songs, (including the title track), for her Fireflies album.  It immediately shot to #1 on the Country charts, eventually going multi-platinum. Suddenly, Lori was a household name, appearing on Oprah with Faith and signing with Warner Brothers. Faith and her husband, Tim McGraw took Lori under their wings and she ended up opening for them on tour.

Her Warner Brothers debut, Unglamorous, appeared in 2007. Co-produced by Tim McGraw, it  felt a bit slicker than her previous releases. It hit #19 on the Country charts, and #109 on the Billboard Top 200. Ironically, Warner Brothers expected even bigger sales, when it didn’t perform as well as expected Lori and the label parted ways.

Since then, she has returned to smaller labels, crafting intimate, personal records.  In the span of three years, from 2011 until 2014, she released Lorraine, Heart-Shaped Bullet, Massachusetts and Numbered Doors.    In between albums, and being a wife and mother to five kids, she has managed to carve out a couple of days a month to fly down to Nashville to concentrate on songwriting and collaborate with other writers.

For her new record she enlisted producer Dave Cobb.  Over the last few years, the Nashville based, Georgia native has made a name for himself. First with the protean Rock N’ Roll band Rival Sons, (as the Beatles had George Martin, Rival Sons rely on Dave Cobb), then with Country outlaws like Jason Isbell, Sturgill Simpson and Chris Stapleton. His old fashioned approach to making music is basically record live to tape with unadorned vocals and instrumentation.

The aforementioned “Wreck You” opens the album on a pensive note. Simple, but evocative, the track is anchored by a cascading mellotron wash and Fire & Rain guitar licks. With just a few well-turned phrases, the listener is pulled into a well-worn marriage experiencing a bout of ennui.

It’s tempting to assume that songs like “The Bird & The Rifle,” “We Were Cool” and “Always Want You” come from Lori’s personal life. After nearly 30 years of marriage-to a guy she’s known for four decades, she has a wealth of experiences to draw from. But sometimes inspiration comes from the most unlikely sources.

The idea for the title track came from a throwaway line she overheard on the TV series “Modern Family,” while she was folding laundry.  The theory that opposites attract, but don’t always connect plays out beautifully in the extended metaphor of a bird and rifle attempting domestic bliss. Over loping bass fills, jangly guitar, soaring mellotron and a rock steady beat the juxtaposition between a high flying bird and a stationary rifle is made explicit. “There’s a bird making coffee in the kitchen, and there’s a rifle out back smoking cigarettes, he don’t ever really feel like talking, no matter what she says/And the bird is always dreaming out the window, looking at that big wide open sky, and the rifle he used to be a dreamer, but he wasn’t made to fly.”

Spiraling acoustic riffs and ticklish percussion power “We Were Cool.” Here Lori offers a knowing recollection of teenage romance that blossomed into a life-long commitment. It’s a tart illustration of small town rebellion; “We were  going to burn this town down, and we were going to run these streets ‘till they ran out/But dreams fade into the ever blue, and time just slips away from you, ‘till you’re staring at each other, remembering when you were cool.”

Roiling bass lines connect with brush-stroke drums and sun-dappled guitar on “Always Want You.” Here, she acknowledges if we’re lucky, sometimes the spark and frisson of physical attraction deepens with the years.  “Don’t wanna close my eyes, don’t wanna sleep tonight knowing I’ll dream the same dream about me and you/It never stops like the hands of a clock just circle around like they do, yeah, I think I’ll always want you.”

On Both “Halfway Home” and “Old Men Young Women”   Lori offers advice to single women trying to navigate convoluted rituals of dating in the 21st century.  The former paints a vivid portrait of post-coital regret. “Deep down you know that you’re worth more than this or the cost of that dinner last night/He’d be driving you home if he was worth half a shit and his daddy had raised him up right, let me remind you there’s real love out there down the road, right now you’re just halfway home.”

The latter blends sly guitar licks, ricochet bass lines and a boomerang beat. The lyrics read like a lost “Sex And The City Script” (or an excerpt from Melania Trump’s diary); “You can have him, I hope you have fun, well I guess wife number three could be the one/But it won’t be long ‘till you won’t be new/And he’ll be downtown trying to find someone to make the mirror stop telling the truth.”  This trenchant couplet says it all: “You want the lights off, he want the lights on/So you can pretend and he can hold on.”

Other interesting tracks include the sleek “All These Things.” Lori also offers her own take on “Humble & Kind,” (the song Tim McGraw took to #1 last year). Finally, “Giving Up On your Hometown” splits the difference between nostalgic reverie and apprehension for the future.

The album closes with the somber torch song “If Whiskey Were A Woman.”  The spare instrumentation accents her Bluesy vocals.  The lyrics tells the tale of a woman desperately trying to be her man’s only addiction.

Marrying early and starting a family never deferred Lori McKenna’s dreams and ambitions, in some ways, she’s like a latter day Loretta Lynn. Even Country superstar Taylor Swift considers her to be a role model.  The songs on The Bird & The Rifle are equal parts straightforward and eloquent, wide open melodies match richly detailed narratives.  Her music effortlessly blurs   the lines between Folk, Country and Rock. And in between all that, she still finds the time to fold laundry.