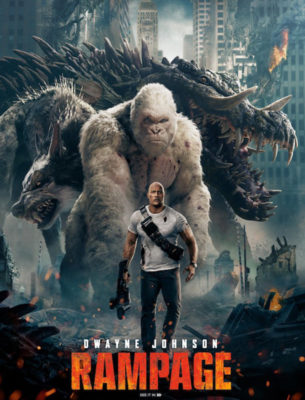 I spent most of the movie trying to figure out for whom this brainless, boring and cartoonish movie was intended.  I decided it must be aimed at now middle-aged former arcade gamers and their young sons.  But even so, this ridiculous “adaptation” of the 1980’s Bally Midway coin-operated game remains true to the core premise of oversize mutant creatures smashing up cities.

But just because current CGI technology can create photo-realistic action involving gigantic monsters doesn’t mean it’s worth the effort if there’s no story that even the presence of the admittedly charismatic Dwayne “The Rock” Johnson can save.

I was impressed with the look of Brad Peyton’s film and appreciated the artistry of the life-like digital animation when the newly mutated gigantic alpha predators — a fearsome lizard, gorilla, and wolf–like creature arrived on screen.

As the monsters race across North America creating a wake of destruction, kind-hearted primatologist Davis Okoye  (Johnson) teams with a discredited genetic engineer (Naomie Harris) to secure an antidote and halt a looming global catastrophe. Okoye wants to save the albino gorilla he rescued from poachers and befriended as an infant, teaching it sign language. 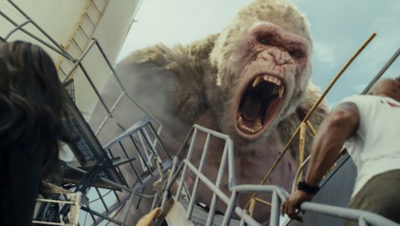 The relationship between Johnson and Harris’s characters seemed phony and pointless.  They are however two stunning human specimens even though normal sized — well, except for Johnson.

I think it’s revealing of the contempt the filmmakers have for the audience that at the conclusion of the two biggest action set pieces, the humongous albino ape gives the finger to the camera.

Coming soon to a Walmart discount movie bin in your neighborhood. 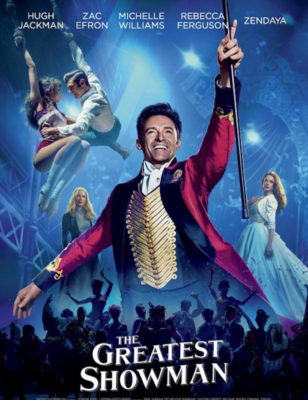 Musicals, both stage and film, are not my first choice for entertainment.  When I first heard they were making a film about legendary showman P.T. Barnum as a musical, I had no interest in seeing it.  Even when I learned it was going to star Hugh “Wolverine” Jackman, an actor and human I like.

But that was then.

Last night, I had a chance to watch Michael Gracey’s showy original dramatic musical that intermittently dazzles with a Barnum-style sense of wonder.  After a somewhat disappointing and treacly opening, I was seduced by this lush looking and uplifting film that celebrates embracing one’s identity and living honestly with confidence and love.

At its heart, the story is not so much about the amazing and dramatic real life of Barnum, but more about class differences and protecting the marginalized “misfits” among us.

I was hooked and swept away the moment Zac Efron and Zendaya almost touch in slo-mo doing aerial acrobatics during the song “Rewrite the Stars.”

We first meet Barnum as an unemployed salesman trying to provide a good life for his wife Charity (Michelle Williams) and two daughters. A true visionary, he opens a theater in New York City and hires “oddities,” folks with unique appeal.  There’s a bearded woman (Keala Settle), a little person dressed as Napoleon, other “freaks” and some trapeze artists. The controversial show attracts a crowd. Barnum reaches out to wealthy playboy Phillip Carlyle (Zac Efron) to help underwrite and promote the show. Phillip is reluctant but eager to step away from his disapproving and domineering parents. Before long he falls in love with Anne (Zendaya), a trapeze performer. Barnum achieves enough success to wedge his way into New York’s high society, but still doesn’t feel accepted, in spite of rising from nearly nothing to worldwide fame and success.

The great music and robust dancing along with the worthy message about the value of one’s uniqueness make this surprising, beautifully crafted film most satisfying on so many levels

The terrific extras include a generous look at the creative process, especially regarding the music that so fueled this feel good movie.  20th Century Fox.  Blu-ray.  Recommended. 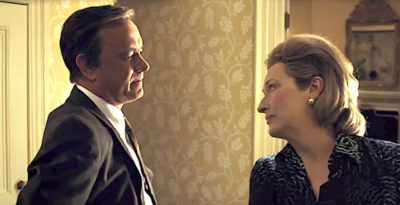 Full of self-importance and too spot-on relevance, Steven Spielberg directs Meryl Streep and Tom Hanks in a talky and stagey drama about the unlikely partnership between The Washington Post’s Katharine Graham (Streep), the first female publisher of a major American newspaper, and hard-nosed editor Ben Bradlee (Hanks), as they play catch up with The New York Times in exposing a massive cover-up of government secrets that spanned three decades and four U.S. Presidents.

For the record, director Spielberg claims he made it urgently because of Donald Trump’s administration. The timeliness of movies that remind that democracy is nothing without a free press cannot be emphasized too much. A good film, but not a great one. There’s none of the sustained tension of the superior and similar themed “All the President’s Men.” 20th Century FOX. Blu-ray. 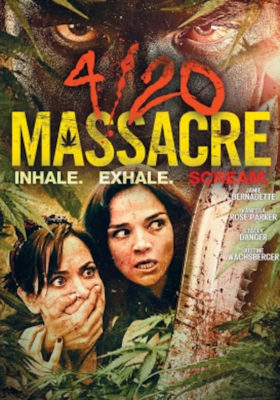 Skip the puff and just pass on this if you’re not a devoted splatter fan.  I barely got a buzz and when it was over, couldn’t really remember it.

Five women go camping in the woods to celebrate a friend’s birthday. But when they cross the turf of an illegal marijuana operation, they must struggle to survive the living nightmare.

This film was marketed as “The first stoner slasher movie.”  I’m not a gore hound, but appreciate low budget indie horror.  I really liked the cast, especially the young women “campers.”  Some of the dialogue and the fleeting but sharp political/social references.  Otherwise, the movie follows basic genre structure and moves rapidly from one grisly death to the next. At first, the culprit appears to be bigfoot, or at least a man in a sasquatch suit or jungle camouflage attire.  Director Dylan Reynolds shot his film in about a week in the Big Bear area.  Film Chest.  DVD.