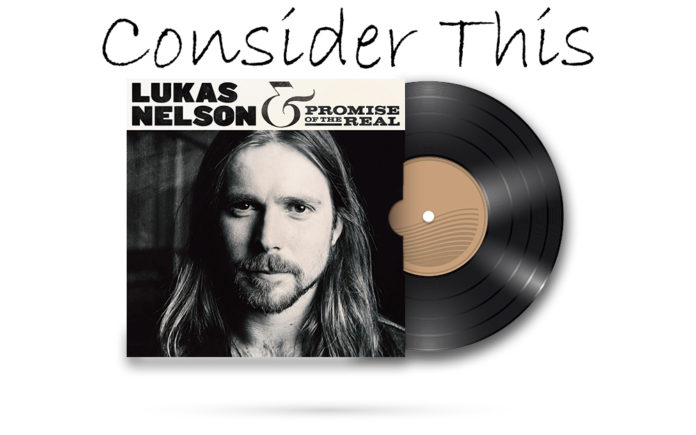 Sometimes making music is a biological imperative, it can’t be denied. But if it’s the family business, that’s when things can get tricky. No one wants to be accused of riding on someone else’s coattails. Nepotism can be a dirty word, but if you have the goods to back it up, ultimately, it shouldn’t matter if your father (rather famously) plays music too.

Lukas Nelson doesn’t run from his musical legacy, he embraces it. Born in 1988 to Willie Nelson and his fourth (and final) wife Annie, his childhood was spent on tour buses surrounded by musicians and copious amounts of weed. He and his brother Micah were invited on stage almost as soon as they could walk, adding percussion to classic songs like “Whisky River” and “On The Road Again.”

The family split their time between Hawaii and Texas. Honoring a birthday request of his dad’s, Lukas began learning guitar as a kid. Much to his mother’s dismay, he began smoking weed before puberty hit. He really pissed her off when he took some to school.  An indifferent student, he asked to join his dad’s band at age 13, and he began touring fulltime as Willie’s rhythm guitarist.

That hands-on experience proved invaluable and for the next few years he honed his chops onstage in front of millions of fans. Once he came of age, he attended college in Los Angeles at Loyola Marymount as a music major. But his matriculation was brief; he lasted just two years before dropping out. Around this time, he met Anthony Logerfo at a Neil Young concert. The pair connected over their mutual love of Neil. They quickly cemented that bond the same evening by going surfing at midnight. Before the night was over they decided to form a band.

Promise Of The Real takes their name from a Neil Young deep cut, “Walk On.” The specific lyric that inspired; “Some get stoned, some get strange/But sooner or later it all gets real.” By 2008 they had recruited Tato Melgar on percussion and Merlyn Kelly on bass. (A couple years in, Merlyn left and Corey McCormick took his place). Later additions included Jesse Sibenberg on steel guitar and Farfisa organ and Alberto Bof on piano, Wurlitzer and Hammond B3 organ.

A road dog like his dad, Lukas and the lads honed their chops through relentless touring. Their eponymous debut was self-released and arrived in digital form in 2010. Two years later the Wasted album appeared. Each year that loyal fan base increased, but the band continued to fly under the radar. They served as an opening act for heavy hitters like B.B. King and John Fogerty, but it wasn’t until they jammed with Neil Young at the 2014 edition of Farm Aid that the five-piece began to gain national attention.

Farm Aid was a collaboration that began in the mid ‘80s between Willie, Neil and John Mellecamp. It was a way to assist struggling American farmers. The annual concerts brought together Country and Rock musicians for a common charitable cause. Neil tapped POTR to back him on his 2015 concept album, The Monsanto Years. That alliance continued on the road, Lukas and the guys eagerly memorized at least 80 Neil Young songs. Their incredible prowess is evident on Neil’s 2016 live effort, “Earth.” That same year, the five-piece released their third album, Something Real, and returned to the road to support it. They also backed Neil for his historic Desert Trip dates.

Now POTR has returned with their fourth studio album and their first on a major label, Fantasy. The Bay Area label started in 1949 and was originally known as the home of Jazz musicians like Vince Guaraldi and Dave Brubeck. It really became a force in Rock N’ Roll in the mid ‘60s when it signed Creedence Clearwater Revival.

Lukas Nelson & Promise Of The Real (the title so nice, they used it twice), opens with the one-two punch of “Set Me Down On A Cloud” and “Die Alone.” The former is a sanctified Gospel stomp powered by stentorian guitar, lurching organ runs and woozy synths. Lukas’ warm vocal style is a reedier version of his Dad’s famous nasal twang. Reeling from romantic disappointment, he confides “my heart’s still bleeding.” On the extended instrumental epilogue his blistering guitar solo shapeshifts, echoing the expressive styles of Eric Clapton, Pete Townshend and the late great Stevie Ray Vaughan.

The latter is a rollicking soul-shouter wed to a rock steady beat. A country-funk kissin’ cousin to AC/DC’s “Long Way To The Top,” it blends fluttery organ, stinging guitar licks and circuitous piano notes. The lyrics pay homage to a lady love who “makes me eggs in the morning, at night she brings me tea/Those little things that never mattered much now mean the world to me.”

Lukas describes the band’s sound as Cowboy Hippie Surf Rock, and that kinda-sorta covers it. Three tracks manage cobble together these disparate styles (and more), creating a heady sonic brew. If Jimmy Buffett and Little Feat got together with some Mad Dogs and Englishmen, it might sound a little like “Fool Me Once.” Gut-bucket guitar speed-shifts through a propulsive, vaguely tropical rhythm; the zippy arrangement belies the lyrics’ inherent sadness.

Lukas’ gritty vocal delivery underscores bitter disappointment as he bluntly declares “I hope you find yourself before I find somebody else to be my lover.” The band locks into an extended groove and the instrumental break spotlights Lukas’ trenchant guitar work, recalling the fraternal gunslinger action of both Stevie Ray and Jimmie Vaughan. The call-and-response interplay between Lukas and the back-up singer is electric. It’s a pleasant surprise to discover the singer is Lady Gaga (ne Stefani Germanotta). The pair became friends when Lukas provided music for the Bradley Cooper re-boot of “A Star Is Born” which stars Cooper and Germanotta.

The best tracks here take the listener to unexpected places by completely coloring outside the lines, (sort of a family tradition). In fact, “Just Outside Of Austin” is something of a family affair, with Lukas’ Aunt Bobbie on keys and Willie reining in his trademark Trigger licks. A pastoral charmer, the melody leans in to an effortless, Burt Bacharach/Jimmy Webb sound.

“Four Letter Word” splits the difference between party anthem and shaggy dog saga. POTR swaggers with bar band brio that borders on Dylanesque. Blistering guitar licks collide with caustic pedal steel notes. Efficacious lyrics detail a case of buyer’s remorse from a pair of footloose newlyweds; “My independence called me from a pay phone far away, he said listen man I’m worried you ain’t never been this way/And I get antsy, real commitment seems absurd, out here in the country, Forever is a four letter word.”

“Breath Of My Baby” is surprisingly tender; a twangy torch song that opens up with some (unironic) whistling. Pedal steel accents, brushed percussion and a lush string section cradle this heartfelt encomium; “We live in a world where evil never sleeps, nothing makes me feel stronger nothing gives me more peace/Then the breath of my baby when she peacefully sleeps.”

Lukas’ songwriting runs the gamut from economical to expansive. On the record’s centerpiece, “Forget About Georgia,” the lyrics offer a concise treatise on the everlasting agony of heartache; “…She told me her name and I knew I would die slowly, I knew I was destined to live with this pain every night/For each night I stand with my father playing out music, we cry out her name and her memory under the lights….and each night I pray I’ll forget about Georgia.” Even as he revels in emotion, the melody and arrangement slowly expands, adding weeping pedal steel, lapping percussion and a beautiful instrumental coda featuring a meandering guitar solo that lasts nearly four minutes.

Conversely, on “Running Shine,” the music is spare and bare bones, anchored by sun-dappled acoustic guitar, searing pedal steel, rattlesnake percussion and rippling banjo from brother Micah. Lukas effortlessly slips into the skin of a 21st century bootlegger, skirting the law but still looking for love. The opening couplets are rich with detail; “My grandfather died up in the hills of Appalachia working on a submarine still, they found him while the mash was still fermenting in the boiler, his back against an oak up on a Hill/And luckily my father knew and I could learn a thing or two ‘bout and securing revenue, keeping with the changing times, dodging governmental fines, trying to stay alive like people do. Alive, doing fine, running shine.”

There’s such a specificity and verisimilitude to the story that is comparable to not just Willie, and Texas songwriters like Townes Van Zandt and Steve Earle, but also novelists like Flannery O’Connor and Elmore Leonard. Short and sweet, the song clocks in at just over three minutes, but it offers a master class in compact song craft.

Other interesting tracks include the Glam/Metal blast of “High Times,” which offers pointed political commentary aimed at both the left and the right. The album closes with “If I started Over.” Metaphysical and piano driven, it plays out in ¾ time, wondering “What if we are all just dreaming, how would we deal with our pain, would we be playing these sad little games destined to come here again and again?” A philosophical end to a nearly perfect record.

Despite his pedigree, Lukas and Promise Of The Real have truly paid their dues. Their fourth effort is packed with indelible melodies and sharp, insightful, often funny lyrics. With this album they’ve completely arrived, and it was well worth the wait.