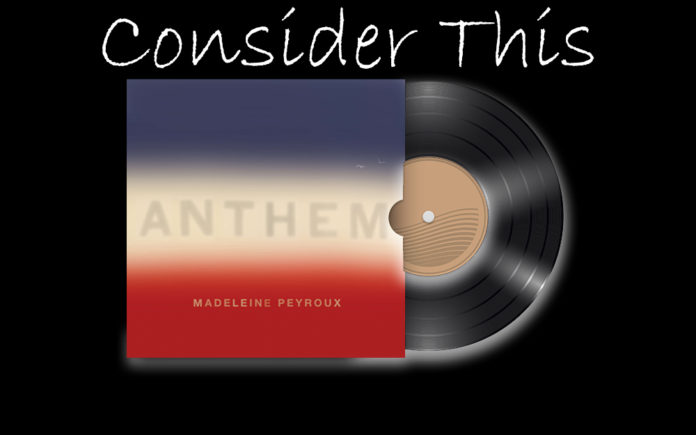 If it were possible for Billie Holiday and Edith Piaf to have a musical love child, her name would be Madeleine Peyroux. In the mid ‘90s, it seemed as though she appeared out of nowhere, and released her debut, Dreamland through Atlantic Records. Just a 22 year old kid, she offered impressive interpretations of songs made famous by icons like Patsy Cline, Fats Waller, Bessie Smith, and yes, Billie and Edith. Plus, she was accompanied by well-respected Jazz players like Cyrus Chestnut, Marc Ribot and Regina Carter. Adding to her mystique, it would be another eight years before she returned to the studio to record her next album.

A native of Athens, Georgia, Madeleine was born in 1974 to parents she characterized as “hippies” and “eccentric educators.” Raised in New York and California, at a young age she immersed herself in her dad’s old records and learned to play her mom’s ukulele. Following her parents’ divorce, she relocated with her mother to Paris, France. It was in the City Of Light that this precocious teen became fascinated by buskers, musicians that made their living playing in the street for tips.

At age 15, she became a member of the Riverboat Shufflers, a band that played vintage Jazz. Not long after, she joined The Lost Wandering Jazz and Blues Band and ended up touring Europe. It was around this time that legendary A&R man, Yves Beauvais discovered Madeleine. Known as a classic Melomane (that’s the French word for music lover), he signed her to Atlantic Records, convinced her to go solo, and in late 1996, Dreamland arrived.

Despite minimal radio airplay, it debuted at #36 on Billboard’s “Heatseekers” Album Chart. Madeleine’s old school approach garnered a plethora of positive reviews and her style felt like a breath of fresh air during the height of the Grunge-A-Palooza ‘90s. But almost immediately, she began to retreat from the spotlight, in part to deal with health issues, and as a reaction to the overwhelming pressures of sudden stardom. Taking some time to find herself, she actually (covertly) returned to her first love, busking. She knew where she was, but for the rest of the world, it seemed as though she just disappeared.

Fast-forward to 2004, eight years had transpired and Madeleine suddenly returned. Signed to the venerable Folk label, Rounder, she was paired with producer Larry Klein. Perhaps best known as Joni Mitchell’s husband from 1982 to 1994, he originally made his bones as a bassist for Jazz trumpeter, Freddie Hubbard. He began honing his production skills in the mid ‘80s, first with Joni and later, making excellent, albeit underrated albums with the innocence mission, David Baerwald and Shawn Colvin. Teaming up with Madeleine seemed like a perfect fit.

Their initial collaboration, 2004’s Careless Love was a bona fide hit, both critically and commercially. Not only did Madeleine offer her sui generis interpretations of classics from Hank Williams, Sr. and W.C. Handy, she also managed to recalibrate signature songs from Leonard Cohen, Bob Dylan and the late Prince of emo, Elliott Smith. The album managed to sell half a million copies.

In the ensuing years, Madeleine continued to make music at a pretty steady clip. The decade between 2006 and 2016 saw the release of Half The Perfect World, Bare Bones, Standing On The Rooftop, The Blue Room and Secular Hymn. Each one a canny mix of telling covers and sharp originals, The arrangements and instrumentation a trenchant distillation of Jazz, Folk and Country, and all featuring her nonpareil vocals. The music was pleasant and fun, but none of the albums pack the visceral punch of Careless Love.

Now she has reunited with Larry Klein, (he had been on hand for The Half…, Bare Bones and Blue Room records), to create her eighth album, Anthem. The impetus for this effort was the 2016 election. (Actually, the current political nadir, spearheaded by the Cheeto-In-Chief, has inspired so much artistic backlash that it’s surprising that Mr. Emoluments Clause hasn’t demanded a kickback). Assembling a team of crack musicians; singer-songwriter David Baerwald, drummer Brian McLeod, composer-keyboardist Patrick Leonard, along with Madeleine and Larry, they co-wrote 10 of the album’s 12 tracks over an 18 month period.

The record gets off to an easygoing start with “On My Own.” Madeleine’s lazy drawl sets the pace over thrumming bass lines, martial percussion, tart brass accents and playful keys. The lyrics find her grappling with the reality of independence; “Ah! What am I missing here, Ah! Something has disappeared, ‘cause I’m all alone like a leaf that’s blown into the great unknown, on my own.” Even as she contemplates re-invention; “Maybe I’ll change my style, try to be nice for a while/ Paint on a sincere smile, get in touch with my inner child,” the wily Wurlitzer notes, fluttery trumpet and frisky guitar contradict this momentary crisis of confidence.

Several songs here blend breezy arrangements and lush instrumentation that nearly camouflage the dour realities contained herein. With “Down On Me,” a rat-a-tat rhythm, bubbly keys and serrated bottle-neck guitar lock into a down-home groove. But the lyrics detail the kind of economic woe that would vanquish a lesser spirit; “My little bit of self-esteem has gone up in flames, teenagers getting wealthy playing video games, the local beat cop keeps giving me that look, don’t even know what drugs I just took/The more I run the more I end up where I start, stuck in The same place, tearing myself apart.”

The tropical lilt of “Honey Party” feels like a long-lost Ricky Ricardo song. Scratchy percussion darts and buzzes under swirling trumpet fills, reverb-y guitar, stately piano and brazen trombone. The lyrics either highlight the Honey Bee shortage in North America or hint at some surreal Bee-on-lady action. Best not to dwell on that part.

Meanwhile, the burnished “Party Tyme” weds sophisticated time signatures, angular guitar, graceful keys and stinging chromatic harmonica with almost conversational lyrics. Casual in tone, it paints vivid character portraits of rehab clinic habitues, with a bite that evokes the bitter cynicism of ‘70s era Steely Dan. Still, a bit of sincerity and pathos manages to sneak into the mix; “Some of us are here, ‘cause we needed out, some have all the answers, some have all the doubt/Some have seen too much to remember who they are, we’re all just getting better we’ve all come so far.”

The most topical tracks never feel preachy or didactic. “All My Heroes” floats on pitter-pat percussion, high lonesome guitar and roiling bass. Initially inspired by the death of poet John Ashbery, the lyrics seem to conjure up iconoclasts like Dylan, Burroughs, Bowie and Prince; “All my heroes were rebels on the run, plagiarizers, vagabonds, vagrants, every one.”

“Ghosts Of Tomorrow” is cloaked in a bit of sad-sack, Second Line sorrow. Smoky harmonica connects with rippling trumpet notes, wistful pedal steel and some sly syncopation. Something of a Big Easy benediction, the lyrics speak to the disillusionment and malaise that currently grips the nation.

Conversely, “We Might As Well Dance” flips the script, insisting (to paraphrase Mr. Mojo Risin’), this isn’t the time to wallow in the mire. Even as the melody offers up a combo-platter of shimmery, slow-cooked soul, the lyrics are a subtle call to arms; “The times are changing and tensions are rising, but fear can never be our guiding Light/I’m not a fool, I know what hate is disguising, and only love can bring the will to fight.”

The most infectious cut on the record, “On A Sunday Afternoon,” abandons real politik for a bit of carpe diem. The hook-filled melody is propelled by trilling harmonica runs, Hoodoo keys, strumming guitar and a rock steady beat, the lyrics pay homage to the restorative powers of herbal refreshment and a quiet day of rest; “Oh, it’s a Sunday afternoon, got Cap’n Crunch and reefer and old cartoons/When I get up tomorrow it will be too soon, we’re lazin’ on a Sunday afternoon.”

The album takes its title from Leonard Cohen’s pensive tune. Here, Madeleine and her mens strip away the loping groove, layering in hushed keys, chiming guitar and thundering percussion. Originally recorded in 1992, the lyrics’ somehow anticipate these turbulent days of despots and dictators, insisting “I can’t run no more with this lawless crowd, while the killers in high places say their prayers aloud/But they’ve summoned, they’ve summoned up a thundercloud, and they’re going to hear from me.”

The record closes with Paul Eluard’s “Liberte’” poem set to music and sung in its original French. Bare bones acoustic guitar and lush strings illuminate prose that was originally written in World War II, but recently gained resonance following the Bataclan terrorist attack in 2015. Spare and evocative, it was originally a love poem, but stanzas like “On my notebooks, on my desk and the trees, on the sand on the snow, I write your name” can also be viewed as an anthem of freedom. Uncommonly beautiful, it’s equal parts tough and tender, personal and political, individual and universal. Ultimately, touching the listener’s soul, with the final invocation, “liberte’.”

Aside from Madeleine on vocals and guilele, Larry Klein on bass, Keys, percussion and video game sounds, the line-up for Anthem includes Dean Parks on guitar, David Baerwald on guitars and vocals, Brian MacLeod and Jay Bellarose on drums and percussion, Pete Kuzma and Patrick Warren on keys, Jivan Gasparyan on dudek, Andy Martin on trombone, Chris Cheek on saxophone, both John “Scrapper” Sneider and Gabriel Johnson on trumpet and Luciana Souza on additional percussion. Backing vocals were handled by Maxine Waters, Julia Tillman Waters and Clydene Jackson. Truly the stand out player her is Gregoire Maret on chromatic and bass harmonica. His fluid style enlivens several tracks, earning comparisons to masters like Stevie Wonder and the late Toots Thielmans.

Anthem is so many wonderful things, joyful and serious, concise and sprawling, lettered and unfettered. It’s a team effort, but Madeleine’s matchless voice is the thread that weaves this aural tapestry. Following her conscience and her muse and connecting with like-minded players has allowed Madeleine to create a record full of grace, gravitas and wit. Anthem is easily one of the best albums of 2018.