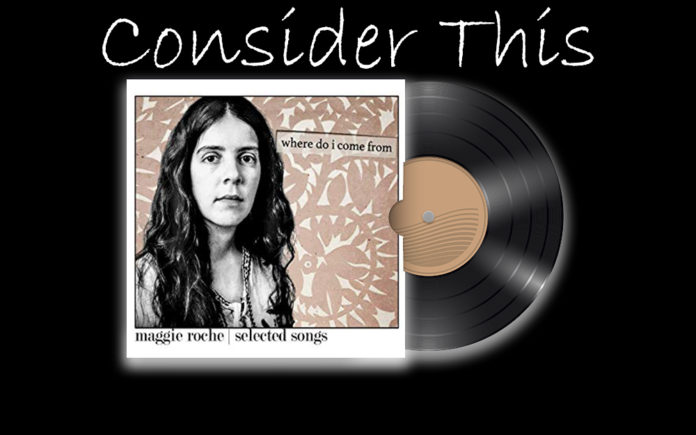 During the first five years of its existence, “Saturday Night Live” was a revolutionary force on television, creating a new paradigm for a variety program, radically redefining sketch comedy, unafraid to be explicitly political or borderline tasteless. They fearlessly teetered on the edge of failure on a weekly basis. They also presented cutting edge musical guests.

One week the show might spotlight iconic musicians like Esther Phillips or Pop sensations like Abba, but they also introduced the general public to Patti Smith, Elvis Costello, Devo, Kate Bush, Talking Heads and Rickie Lee Jones. In November 1979, the Roches appeared and performed an acapella version of Handel’s “Hallelujah Chorus” and killed it. Anyone lucky enough to witness that magic, became life-long fans.

The Roche sisters, Maggie, Terre and Suzzy (rhymes with fuzzy), grew up in Park Ridge, New Jersey. They honed their singing skills in church choir and at political rallies. In the late ‘60s, Maggie dropped out of college and began performing with Terre, even though the latter was still in high school. A few years later the pair attended a songwriting seminar given by Paul Simon at NYU and he was so impressed he invited them to sing back-up on his There Goes Rhymin’ Simon album. That led to a deal his label, Columbia, and the duo released their debut, Seductive Reasoning in 1975.

Although the album showed flashes of brilliance, Maggie and Terre felt stymied when the label insisting they use session musicians, a ‘60s era producer and the Muscle Shoals studio in Alabama. The experience soured them on the music business and they quit for a while. Enter younger sister Suzzy, fresh from college. Pushing the duo to let her join, a trio was born and their new sound gave them a renewed energy.

In the late ‘70s, The Folk scene in Greenwich Village was experiencing a renaissance and the sisters began participating in Hootenanny Nights at legendary clubs like the Gaslight and Gerdes Folk City. Pretty soon they were booking regular gigs at those venues, attracting a healthy fan base and interest from record labels. Signing with Warner Brothers, the sisters were paired with producer and ex-King Crimson guitar wiz, Robert Fripp.

Their self-titled debut, arrived in 1979, and it was a revelation. Impossibly perfect soral harmonies soared over quirky, sometimes awkward, always witty lyrics and sparkling Folk-Pop melodies. The cognoscenti were already clued in and the album received rapturous reviews. The sisters received shout-outs from au courant hit-makers like Phoebe Snow and Linda Rondstadt. The album didn’t sell a million records, but it reached #11 on the Village Voice Pazz & Jop critics poll.

The trio continued to record together throughout the ‘80s and midway through the ‘90s. They couldn’t quite sidestep the sophomore slump on 1980’s Nurds, but rebounded beautifully with their third effort, 1983’s Keep On Doing. On their fourth album, Another World, mostly amazing songs were mired in ‘80s production values, but by the end of the decade, they reigned in the synthesizers and created Speak, which was hailed a stunning return to form.

In the ‘90s they expanded their reach and recorded a (long-awaited) Christmas album, as well as a Kids record, along with two studio efforts, 1992’s A Dove and 1995’s Can We Go Home Now. Taking an extended hiatus as a trio, both Suzzy and Terre recorded solo albums and at the

beginning of the 21st century, and Maggie and Suzzy created a couple of records as a duo. The trio roared back to life with Moonswept in 2007. Although they never achieved wild commercial success, the Roches cultivated a loyal and devoted audience. People all over the world felt a personal connection to their music.

Sadly, in early 2017, Maggie Roche passed away at age 65, losing a battle with breast cancer. Naturally, fans mourned her death, revisiting her 40+ year career in music. It felt so sudden and it seemed so unfinished and it left a collective ache. Luckily, Where Do I Come From is a new compilation that places the spotlight on Maggie. Lovingly curated by her sister Suzzy, the two disc set begins with her duo songs with Terre and ends with a 2016 home recording.

The first disc kicks off with five tracks from Seductive Reasoning. The very first song, “Malachy’s,” easily distills the terror and magnificence of playing your first real gig. Chiming acoustic guitars intertwine over a relaxed rhythm as the opening couplet details the prosaic realities of soundcheck; “Eddie said the beat was wrong, Tom didn’t like the tune, the boy with the beard in the corner laughed in the middle of the song/He didn’t stay very long.”

Two songs are surprisingly Country-tinged. “Burden Of Proof” yearns for a more bucolic life, but adds this comforting affirmation; “And in this struggle, it’s important that you know that you are fine.” The blustery “Underneath The Moon” is equally wise-ass; “Good men want a virgin so don’t you give yourself too soon, ‘cept in an emergency like underneath the moon,” and wise; “A woman is like a puzzle, shackin’ up with a clue, while every piece she get is another piece she lose.”

Meanwhile, on “Jill Of All Trades” and “West Virginia,” contemplative melodies and instrumentation match the introspective lyrics. “Jill…” is primarily powered by rippling piano notes as Maggie’s piercing alto takes the lead. A swelling string section underscores the narrator’s restless malaise, as she addresses “Jill of all trades, Jill the old maid,” advocating for a change of scenery; “You and me ought to both run away, in this swelling of the moon.” Conversely, “West Virginia” pivots from a quiet tone poem, all tinkling piano and clipped verses, before a full string section swoops in giving the song a lush cinematic quality. Terre’s crystalline soprano navigates the cryptic language.

The trio’s self-titled debut is well-represented with four tracks, starting with the gorgeous “Hammond Song.” The sisters’ honeyed harmonies are stacked atop sympathetic synths and layered acoustic and electric guitar. The sheer beauty of their sound nearly overwhelms lyrics that switch contrasting viewpoints between concerned parents and their rebellious kid.

The Folk-flavored acoustic fret-work that opens “The Married Men” nearly camouflages this casual tale of infidelity. The easy bravado displayed in lines like “Never would have had a good time again if it wasn’t for the married men” is quietly deflated by this revelation; “They know what is wrong with me, none of them wants my hand, soloin’ in my traveling wedding band.”

The gorgeous harmonic soundscape of “Quitting Time” almost eclipses a narrative that captures the brittle ennui of being trapped in a dead end job. The vaguely Elizabethan feel of “Pretty And High” is undercut by the sisters’ willful dissonance.

Surprisingly, only “This Feminine Position” from 1980’s Nurds, and “Losing True” and “The Scorpion’s Lament” From 1983’s Keep On Doing, made the cut here. “Another World,” released in 1985, has been completely omitted in favor of the title track from the Roches’ 1986 four song EP.

On “Feminine…” serpentine acoustic guitars coil around the sisters’ acrobatic harmonies, but their sweetness is spiked with Maggie’s typically trenchant wordplay. Lightly touching on Adam & Eve, they seemingly surrender to societal pressure; “Because you’re making it with the apple in me, I’ve cooked this goose before/And I have had it with the devil, he was stiff as he was bored.”

“Losing True” further explores that theme, women sublimating self; “Aging and aching and raging and faking…” But those gimlet-eyed couplets are almost completely obscured by the latticed acoustic notes that yield to Robert Fripp’s coruscated electric solo, and above all the Roches’ incendiary vocal pyrotechnics. The moody “Scorpion’s Lament” is accented by piquant acoustic licks and stinging electric riffs. Maggie tackles the verses here as Terre and Suzzy kibbitz on the chorus. The lyrics hint at an assignation gone horribly awry. Finally, “No Trespassing” is surprisingly sunny, the overly synthesized instrumentation ever-present in the ‘80s, hasn’t aged very well. But meandering guitar, quiet keys and the cautiously optimistic lyrics more than make up that dated sound.

Disc two opens with a surfeit of songs from the Roches’ fifth full-length, Speak. Perhaps their most conventional effort, it featured the quirky title track, along with “Cloud Dancing,” their slightly eccentric take on a Chinese poem translated by Kenneth Rexroth. Both in “In The World” and “Nocturne” were by turns luminous and quiescent. The (shoulda been a hit) single, “Big Nuthin’” offered sardonic commentary on their lack of commercial success, couched in a hook-filled melody. Closing out the Speak set is the sleek but sweetly sincere, “Feeling Is Mutual.”

1992’s A Dove completely jettisoned the synth sounds that tended to dominate the Roches late ‘80s output. For anyone else, going acoustic might signal a more mellow, laid-back vibe. The sisters dispel that notion in the first verses of the countrified title-track; “A dove settled on the sill and I called my cat/Love, if looks could kill and that was that.”

The trio truly stretched out on their 1995 effort, Can We Go Home Now. The title song, along with “My Winter Coat” each clocked in at over eight minutes. The former is a straight-ahead love song, the latter, a wry and super-specific meditation on…you guessed it, her coat. Following this album, the sisters took a 12 year hiatus.

In 2002, Maggie and Suzzy returned with “A Prayer,” a song inspired by a Vietnam Vet, as well as the horrific events of 9/11. Two years later, the pair returned with their Why The Long Face album. Curiously, they chose to revisit “Broken Places,” originally featured on Speak, as well as “One Season” from Nurds. Maggie, Terre and Suzzy reunited in 2007 to record their 10th album Moonswept. The spare and economical “Family Of Bones” is the lone contribution from that record.

The real revelations here are the demos, there’s the rollicking 1972 Cut, “Stayin’ Home” which features Maggie’s most full-throated, spontaneous vocals and jangly guitar from Terre. The bare-bones and heartbreakingly tender take on “Down The Dream,” is by turns Bluesy, torchy, twangy and unbearably beautiful. The collection closes with “Where Do I Come From.” More of a snippet than a song, it was discovered posthumously, probably the last music Maggie recorded, and it kinda breaks your heart.

This is more than an elegy, it’s a celebration of a protean talent. Maggie and her sisters may not have become household names, but their music spoke a specific language that millions responded to. Full disclosure: I was a 16 year old Punk Rock obsessed Bitch Goddess-in training when I caught the Roches on SNL. Their songs changed my life, and I know I’m not alone. Their music was authentic and original. It still is.