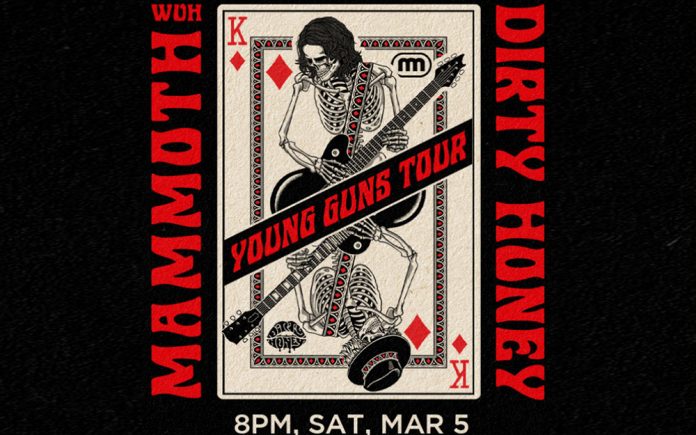 “My friends and I like to play a game,” I tell Wolfgang Van Halen (of Mammoth WVH) and Marc LaBelle (of Dirty Honey), “where we all say what was the first concert we went to and decide who’s had the best first concert experience. So, what were the first concerts each of you went to?” There’s a pause, then they both chuckle. They’re good sports and are up for my game. The caveat in this particular game is that it can’t be the concert of someone you’re related to (a rule I’ve never had to make before now). Wolfgang starts us off, “I think maybe my first concert was The Hives in middle school at the Wiltern, where we are actually playing on this tour.” He admits that he’s not sure, but prior to that he may have attended a Britney Spears concert when he was in kindergarten. Marc’s first concert was Aerosmith, and it gets his vote since he still loves them today, so the seeing them for the first time meant a lot to him. Fair enough. I tell them I think I’ve won – my first concert was Grateful Dead with Bob Dylan opening for them. Wolf is quiet and then hits me with, “That’s cool. But did you go to a Van Halen concert while you were in the womb?” I did not. He wins.

Asked about their band names, Wolf told me, “Mammoth was one of many early names of Van Halen, an incarnation of my father and Mark Stone. Whenever my dad told me the story, I always loved that name. I chose it because I loved it and as a nod to that early Van Halen history. And of course, WVH are my initials.” Marc’s story about Dirty Honey is a bit different, “Dirty Honey was on a list of names I had been keeping track of and it wasn’t until we were literally changing our band name every week and people couldn’t even keep track, that we narrowed in on it. Robert Plant was on Howard Stern talking about his side project, the Honey Drippers. It sparked something in my mind. I went back and looked at the list and there it was, third one down. It was the first time we all agreed on a name, so it just stuck.”

Last year, Mammoth WVH toured with Guns N Roses and Dirty Honey toured with the Black Crowes. They shared about those experiences and what they learned from touring with such seasoned rock vets. As Wolf tells it, “It was just amazing to be a part of it. It’s not like I took lessons from it, it’s more just being a part of it all.” Marc adds, “We were out touring with the Black Crowes and you’re trying to learn through osmosis and pick up tidbits of routines and what they do on stage. It’s tough not to walk away with some stuff. You really get the feeling like that any veteran artists are there for the right reasons.” This year, these two bands, Dirty Honey and Mammoth WVH, share the stage with each other in their Young Guns Tour. The synergy between these two groups – and what makes them such good tour mates – stems from the fact that they both perform completely live. “What I admire most about Dirty Honey is they’re live,” Wolfgang tells me. “I have a keyboard on stage that I only play for two songs because I don’t want to play a track. I don’t like tracks, it’s not live.” Marc concurs. “At the root of it, the music we play is different, stylistically it may not be quite the same. But it’s all badass rock ‘n roll.”

The aim of this Young Guns tour is to show that rock ‘n roll is alive and well. I ask if rock ‘n roll has been less of a dominant genre of music recently and why they think that is. The guys tell me, “It takes a lot of effort to be really good at an instrument and a whole other thing to be a good band. The band thing is chemistry. It’s really hard work. It’s become easy these days to auto tune yourself on the computer and fix mistakes. It’s become easy to be lazy and still have a good product until you have to get on the stage and play live. Our generation and the ones behind us have become prone to living that way through their art.

Technology has made musicians complacent when they can fix anything in post.”

When it comes to being inspired musically and the evolution of that since their beginning days of making music, Wolf says, “I don’t think it’s changed much. I write music that makes me happy, and I’d want to hear more of. That excites me.” Marc adds, “I hate writing music, but I like having written music. The endless slog through that Shawshank Redemption tunnel of mud and shit is not my favorite with writing. Unless it comes easily, you maybe just hit a riff, a cord progression, come up with some lyrics or a melody. You usually have only one of those things and that one part is hopefully inspiring for the rest. It’s not easy to come up with even those little nuggets. But you’re doing something you love and wanting to hear more of it.”

So, what is the anatomy of a great rock song and what’s their process when coming up with lyrics? “I think a melody that you can scream at the top of your lungs and a riff that excites you can make up a truly great rock song.” Wolf explains. Adding to this, Marc says, “One thing I’ve noticed recently, because of sporting events – and there’s not a lot to do these days other than go to sporting events – a great intro is an important element. Welcome to the Jungle. Hot for Teacher. That first 30 seconds that really tease up the riff that follows us. Really attention grabbing.”

Fans who come to the show at Fantasy Springs on Saturday, March 5 can expect to see rock bands that blow their mind with live performances. “I think Wolf is an incredible player and singer and I wasn’t surprised, but it’s almost like proud…I was proud for you ,Wolf, when I saw you play for the first time. I’d seen him perform with another artist and I was thinking that he’s really doing it and taking a risk. We all appreciate that when someone is raw in that way and performs live. They’re ok with being flawed. There’s an energy to that and you feel the snowball effect of it.” If you’re excited to see the next generation of badass rock ‘n roll bands performing live, go grab your tickets here, if you haven’t already: https://www.fantasyspringsresort.com/mammoth-wvh-dirty-honey-2/