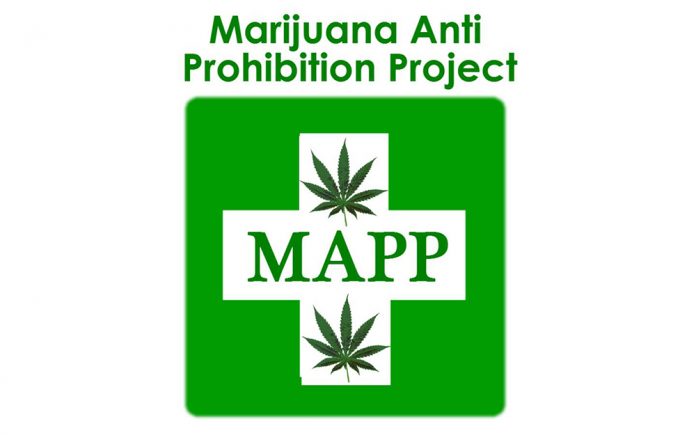 The Marijuana Anti-Prohibition Project (MAPP), the Inland Empire’s first and most active medical marijuana patient support group and law reform organization, will be celebrating its 20th Anniversary in December. Founder and Director, Lanny Swerdlow looks back and says  “If someone had told me when I first began MAPP twenty years ago in  December 1999 that people would be able to grow their own without fear of arrest and that it would be sold legally in stores,  I would have wondered what they had been drinking.”

To celebrate 20 years of successful cannabis activism in the IE, MAPP will be holding a 20th Anniversary Celebration on Saturday December 7 at 5 p.m. in the consumption lounge at the Vault Dispensary in Cathedral City at 35871 Date Palm Drive in Cathedral City CA. The event will feature speakers, entertainment and a buffet dinner.

MAPP has always been a local Inland Empire organization engaging local citizens with local elected officials to allow for safe, reliable and local access to cannabis. It was members of MAPP that approached the Palm Springs City Council in 2008 asking them to enact an ordinance that would allow for medical marijuana dispensaries to open and provide marijuana to medical marijuana patients with valid doctor’s recommendations.

MAPP Director Lanny Swerdlow was a member of the task force and notes that the City took developing this ordinance very seriously. “Two city council members, Ginny Foat and Steve Pougnet served on it along with City Attorney Doug Holland, Chief of Police Gary Jeandron and citizens representing different segments of the community. It took one and one-half years to get it written and passed, but city officials were determined to make it happen from the beginning.”

Since its founding, MAPP has been active in promoting and protecting the rights of medical marijuana patients to have access to marijuana. They have made repeated appearances before the Riverside and San Bernardino County Board of Supervisors as well as many cities in the IE.

One of MAPP’s major accomplishments came about in 2015 when Riverside County was considering banning all medical marijuana patient cultivation. A concerted push by patients at a Board of Supervisor’s meeting resulted in the ordinance not being implemented and instead an ordinance was enacted that specifically allowed patients the right to cultivate their own medicine in quantities that could provide them with sufficient medicine to treat their ailments.

Today the Coachella Valley is a hotbed of cannabis activity with Palm Springs, Desert Hot Springs, Cathedral City, Palm Desert and Coachella allowing commercial cultivation, manufacture and distribution of cannabis. The only other IE cities to allow commercial cannabis businesses are Adelanto in San Bernardino County and Perris in Riverside County.

With the passage of Prop. 64, which legalized the use of cannabis for all adults 21 and over and the development of legal commercial businesses, MAPP has been working to make cannabis accessible throughout the IE.

Although no licenses have been issued, MAPP is currently working with Riverside County in the development of its ordinance to allow cannabis businesses to operate in the unincorporated areas of the County which is expected to take place in 2020.

The passage last week by the House Judiciary Committee of the MORE Act will remove cannabis from the Controlled Substances Act and thereby end federal marijuana prohibition. A vote on the House floor is expected sooner rather than later and will make MAPP’s 20th Anniversary a truly momentous event.