There are innumerable approaches to the art of Charitable Giving, and countless ways of giving back to one’s community. Any one of a thousand profiles of people selflessly giving back to others is bound to impress, yet the story of Mario Del Guidice and his relationship with his community, as well as his unwavering devotion to supporting Desert Arc is an especially heart-warming one.

A staple in the Coachella Valley’s hospitality industry for close to 50 years, the Mario’s Italian Café brand has grown to include seven locations throughout the Coachella Valley. Mario’s family from Naples Italy represents five generations who have worked in some aspect of the restaurant /foodservice industry. Mario started at the age of nine working alongside his father, Peter William Del Guidice, who owned a Butcher Shop. By the time Mario was 15 years of age he was already a seasoned meat cutter. He credits not only his father, but two special uncles with molding his youth and teaching him all aspects of the restaurant industry. Mario quickly learned that hard work and perseverance definitely pays off. He got his first taste of working in the restaurant business in 1961 in Queens, Brooklyn, and New York.

After his first visit to Palm Springs, Mario realized he wanted to set down roots here, so he moved his family to the Coachella Valley in 1972. Today, 13 family members live in the Palm Springs area, with eight family members working in the family’s restaurant business. Mario, along the way, strived to instill in his children at a young age the art of giving back, always leading by example.

Looking toward the future to continue his family’s restaurant legacy, Mario three years ago offered his grandchildren an opportunity of a lifetime. Mario refers to this five-year secession plan as the “Grandkid Opportunity.” As he explains to his grandchildren “this will certainly take tremendous dedication, hard work, and perseverance. It will involve a commitment from his grandchildren for each of them to work for the next five years a minimum of 70 hours per week, with one day off, in addition to one week of vacation. Although this sounds like a tremendous amount of hard work Mario explains “there would be light at the end of the tunnel because my grandchildren would secure ownership in the family’s restaurant business.”

“My youngest grandson Daniel Christopher, who is 25, along my granddaughter Courtney Page Del Guidice, who is 26, worked alongside their dad growing up, as many of my grandchildren have,” commented Mario. “It has been a joy to watch Daniel progress. Not only is he involved in the cooking, but he is also involved in the management side of the business. Daniel brings an open mind, a heart of giving, and fairness to the business. I am extremely proud of all my grandchildren and their hard work ethic, fairness, and giving hearts.” 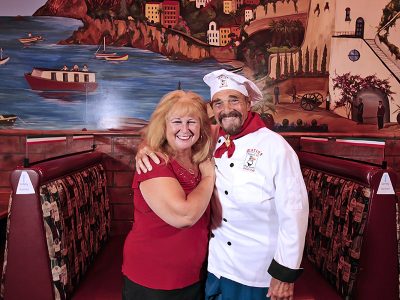 With the vibrant passion that only a true New York Italian seems to possess, Mario approaches every day with the vigor of a much younger man. Although his daily routine includes visiting every one of his seven restaurants to oversee quality control and other issues, Mario can be found most mornings at his Bermuda Dunes restaurant, preparing the homemade sauces and pastas for which all of his restaurants are known for. His two sons, Matthew and Peter now in their 50s, work alongside Mario and his wife Karen. “My sons have been involved in the business since they were 8 and 9 years of age,” states Mario. “I have two wonderful sons. They are my partners in business, and partners in my life!”

Mario became aware of Desert Arc’s mission of enhancing the quality of life and creating opportunities for people with developmental and intellectual disabilities in the early 1980s, when a former Desert Arc Board member, solicited him for a donation. Mario, at the age of 12 as part of a detention for being disruptive in his 5th grade class, was forced to work with some handicapped kids at his school in New York. That experience had a profound impact on Mario, as he developed an appreciation and respect for the work ethic and joy he saw in those youngsters he worked alongside. So, when the chance came to contribute to the Desert Arc mission, Mario knew he needed to take it!

Since that beginning, Mario has found numerous ways of helping Desert Arc and its clients to succeed. One of the most profound ways has been his training program. He has opened the doors of his restaurants to Desert Arc clients, and on a 5 day-per-week basis Mario has taught them different aspects of the restaurant business. Mario declares “Giving back to the less fortunate is a feeling you simply cannot buy.” Today, he employs four Desert Arc clients on a weekly basis, while at the same time actively seeking other ways to generate visibility for the organization’s mission.

While he maintains good relationships with all of his employees, there is one employee who brings a smile to Mario’s face whenever he sees him. Luis, who Mario refers to as his “Shining Star” employee, has been a part of the Mario’s Italian Café family for 19 years. Mario considers him just as much a part of his immediate family. Despite his challenges, Luis immediately was able to grasp many nuances of the restaurant operations, and as Mario will tell people “Luis knows where everything is in the building and I don’t! “Every time Luis does a job, I make an effort to say thank you. He works six days a week, and gives me back twice with loyalty and love.” Luis came to Mario’s Italian Cafes through Desert Arcs’ Pathways to Employment Program.

Mario over the years has been involved with two key Desert Arc client events, which include the Christmas Celebration and Mario’s Birthday Bash, where Mario underwrites 100% of all the food at these celebrations. “Everyone needs money to operate and be successful, but you cannot buy the feeling you get when you give back,” he argues. Although he looks forward with much anticipation to the annual Christmas Celebration, Mario truly relishes the Mario’s Annual Birthday Party, held on his April 6 birthday, with many of his close friends assisting in this great event. For this celebration, Mario provides all the food, with his wife Karen making all the desert offerings, including an immense cake for the over 700 Desert Arc clients who attend. Harpo the Clown regularly makes an appearance at both these events, and a DJ is present to get everyone out on the dance floor. Mario swears that his birthday bash with the Desert Arc clients leaves him feeling 25 again. “When I come to Desert Arc and underwrite these two events everyone gives me so much love.”

When asked what motivates him Mario replies “the love of my family, my friends and what I do because I love what I do. My wife Karen works alongside me in my seven restaurants each week and is so supportive. I could not do this today without the love and support of my two sons and my wonderful wife.” 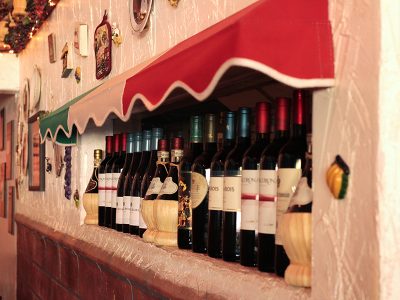 Considering the pandemic that we are all going through, Mario decided to give back yet again, launching a brand new idea called Mario’s Community Mondays, which now feeds over 2,000 first responders, homeless individuals, National Guardsmen, as well as local nonprofits and hospitals. Since the program’s inception, Mario’s Italian Cafés have served over 14,100 meals. Additionally, Mario’s Italian Cafés has seen to it that over 100,000 surgical-grade gloves have been donated to local area hospitals.

Mario’s connection with the community is evident not only through his Community Mondays meals program, and his extensive work with Desert Arc, but also through his work with 11 local high schools. He also contributes to the American Cancer Society and the American Red Cross. “The Coachella Valley has given me so much success,” he beams. “I feel fortunate I have the chance to give back.”

Giving back is in Mario’s DNA. He has not only taught his children and family to give back, but is definitely an amazing role model for many generations to come. When asked, Mario Del Guidice cannot say no to help his community!!