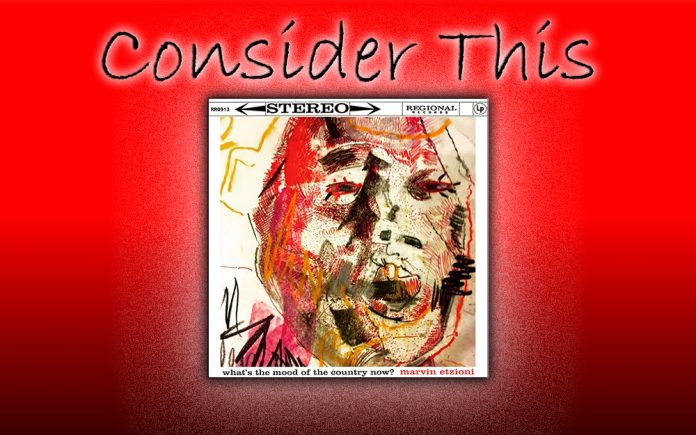 Marvin Etzioni has been a fixture on the L.A. music scene for over 40 years. Born in Brooklyn, he grew up in Los Angeles and took to music early on. Even before he began attending Kindergarten, he was already collecting ‘45s. Around the same time, his beloved Zayde (that’s Yiddish for grandfather), introduced him to Country music, igniting a lifelong passion.

Marvin made his bones playing drums and singing in the band Prudence Goodbody, a few years later he was fronting The Model, a sharp combo that shared stages with other up-and-coming bands like the Plimsouls and the Motels. It was then that he forged a solid friendship with Plimsoul leader Peter Case.

By the early ‘80s, the sprawling metropolis of Los Angeles was host to myriad music scenes, Punk Rock continued to flourish, Hair Metal was making headway and bands like X, the Blasters and Los Lobos adopted the D.I.Y. ethos of Punk, but managed to explore the more homegrown sounds of Blues, Country and Norteno. Marvin was eking out a living as solo artist when he met a young guitarist named Ryan Hedgecock.

Ryan, along with vocalist Maria McKee shared Marvin’s affection for Country music. The pair wrapped their symbiotic harmonies around Hillbilly classics and pretty soon, Marvin was encouraging them to write their own songs. He went from mentoring them, to joining the fledgling duo on bass. When ex-Emmylou Harris/Hot Band drummer, Don Heffington came on board, Lone Justice was born.

Gigging around town, the band quickly gained a passionate fan base that included well-known admirers like Dolly Parton, Bob Dylan and Linda Ronstadt, as well as Tom Petty and assorted Heartbreakers. Signed to Geffen Records, they were heavily hyped as the next big thing Of course, Maria became the focal point, the younger sister of L.A. legend Bryan MacLean (part of the celebrated Sunset Strip Baroque/Psychedelic outfit Love, they gained notoriety alongside The Doors and The Byrds), she grew up surrounded by music. Her protean vocals were favorably compared to Dolly, Emmylou, Linda and Janis Joplin. That was a lot to live up to.

The band’s self-titled debut was produced by Jimmy Iovine, and he nearly smothered their bare-bones sound with bombastic touches that seemed de rigueur in the mid ‘80s. Despite nearly unanimous critical acclaim, and a coveted spot opening for U2, ultimately, their sound was deemed too Country for the Rock crowd and too Rock & Roll for traditional Country fans.

Marvin, Ryan and Don quit the band and Maria soldiered on with different musicians on one more record. But by 1987, Lone Justice was done. Marvin quickly landed on his feet, having mastered myriad string instruments, he became an in-demand session player.

By the early ‘90s he released three excellent solo albums in quick succession; “Mandolin Man,” “Bone” and “Weapons Of The Spirit.” Each achieved critical acclaim and received airplay on a new radio format dubbed Triple A (Adult Album Alternative), as well as venerable independents like KCRW.

For the next couple of decades, Marvin successfully toggled between making his own music, session work and production gigs. As a sideman, he’s played with a who’s-who of musicians like Bob Dylan, Lucinda Williams, Lily Hadyn, Lisa Loeb, Victoria Williams, Grey Delisle, Dixie Chicks, Sam Phillips and the Williams Brothers. He has produced albums from Toad The Wet Sprocket, Peter Case and Counting Crows, and he’s also shared stages with everyone from T-Bone Burnett, and Norah Jones to Keith Richards.

Recently, he released the double album, “Marvin County,” which included duets with a surfeit of superstars like Steve Earle, Lucinda, Richard Thompson, Maria McKee, John Doe and Buddy Miller. In 2016, he partnered with old pal, and former Balancing Act front-man, Willie Aron to form Thee Holy Brothers. The duo created “My Name Is Sparkle” a soulful song-cycle that echoed sacred efforts like George Harrison’s “All Things Must Pass” and Pete Townshend’s “Who Came First.”

Recently, Marvin started his own label, Regional Records. Back in the early ‘90s, Regional was slated to become a subsidiary imprint of Virgin Records. But a label shake-up scuttled those plans. 2020 seemed like the right time to resurrect the idea in Indie form. The label’s inaugural release is also his fifth solo effort, “What’s The Mood Of The Country Now?.”

Several of the songs on the album have existed in various stages of completion for years, Marvin has just been waiting patiently for the puzzle pieces to fit. The album unfolds quietly with the opening cut, “Every Breathing Soul.” Part pocket Spiritual, part mantra, part invocation and part campfire sing-a-long, this acapella gem delivers one potent message; “Every breathing soul needs to live in peace.”

Some of the songs here feature vocalist Sy Smith. The critically acclaimed singer-songwriter has released several of her own albums, played with Acid Jazz progenitors the Brand New Heavies and Chris Botti. She has also sung back-up for everyone from Sheila E., Usher, Meshell Ndegeocello and Whitney Houston, as well as performing on TV series like “Monique” and “Ally McBeal.”

She first appears on “God Bless The Homeless,” this song was originally written 35 years ago and Marvin performed it at a benefit featuring a stellar Greek chorus that included Jackson Browne, the Go-Go’s and Mick Fleetwood on drums, sadly, the lyrics still resonate, since the homeless population has only increased since then.

Spatial and static-y instrumentation is powered by a pulsating rhythm, wiry bass lines, serpentine guitars and fluttery mandolin. The arrangement lands somewhere between the Clash’s “Know Your Rights” and “White Lines,” the iconic Rap classic from Grandmaster Flash. Marvin and Sy’s vocals intertwine as they address an out-of-touch bureaucracy; “Hey Mr. President, this country is cracking at the seams/ How long must our children sleep without shelter in the streets.” As the intensity accelerates, spiky guitars collide with skronky horns and buttery mandolin before the lyrics deliver a few more home truths; “Just ‘cause you got a heart, don’t mean you can’t be heartless, just ‘cause you got a home, don’t mean you won’t be homeless/Just ‘cause you got a car, don’t mean you’ll end up where you’re headin’ for, just cause you got a job, don’t mean you make enough to pay the landlord.” An extended instrumental coda brings the song to a clanky close.

“Think Different” takes a swipe at giant corporate monsters like Apple who co-opt revered cultural touchstones to shill their product. The instrumentation is purposely cold and and industrial, Marvin and Sy’s filtered vocals ride roughshod over electro-static guitars, squiggly synths and a thumpy, programmed beat. Lyrics like “They think they’ve got you in the palm of their hand, a mouse in a trap, think different,” encourage us to resist. A stately horn section adds a human touch.

Although it was written nearly 30 years ago, “Here Comes America” feels as though it could have been written just a few days ago. Clarion call guitar seems to usher in a more optimistic era. Marvin and Sy’s vocals wrap around each other in a warm embrace, latticing over wavy synthesizers, Moog bass lines and a propulsive beat. The opening couplet is suffused in hope; “Here comes America, the one we’ve been waiting for my friend/Here comes America, the future of freedom is in your hands.” Most of the song is a muted response to the (first) Iraq War, but like a fine wine, it pairs nicely with the upward mood-swing that coincided with the news that Joe Biden is our President-Elect.

Meanwhile, “The Last Weapon Left” predates even the Lone Justice era, harkening back to his tensile New Wave Days. Brutish guitars connect with swirly horns, angular bass and a caffeinated beat. The jagged instrumentation is juxtaposed with whispery vocals that offer these intimate confidences; “You and I have fallen from grace, sinking in the sorrow and joy of love, against all odds we wake up still in each other’s arms/and the last weapon left, the last weapon left, the last weapon left is the heart.” Sure, love is war, but this is extends something of a romantic detente.

Speaking of romance, both “Abide In My Love” and “Cover Your Bamboo” puts the sturm und drang on pause and indulges in a bit of slightly salacious fun. The former is a spoken word/sound collage that features a vocal sample from famed erotica writer Anais Nin trading verses with Marvin as she reads from one of her journals. The only time their voices converge is when they are expressing wildly divergent thoughts, he’s all id; “Kiss me so I can taste the divine spirit and know what rain feels like.” She’s so super-ego; “Man can never know the kind of loneliness a woman knows, man lies in a woman’s womb only to gather strength, he gathers himself from this fusion/And then he rises and goes into the world, into his work, into battle, into art, he is not lonely, he’s busy, the memory of the swim in the amniotic fluid gives him energy, completion.” Once the song ends, the listener might need to indulge in a post-coital cigarette! The latter is playfully priapic and features call-and-response verses between Marvin, Sy Smith and Gospel-Rapper Eastwood, over wah-wah guitar, extra-terrestrial synths, syncopated horns, scratchy percussion and a rollicking beat. The opening couplet gets right down to bizness; “She said ‘I don’t want no baby in my belly, maybe someday, but right now I’m not ready.’” Pretty quickly, the carnal negotiation is lightly coated in some Fab Four flavors; “She said ‘no please, please me, no love me do, not unless you cover your bamboo’”

The frisky, flirty vibe of “…Bamboo” is neatly juxtaposed by the stripped-down Gospel celebration of “(There’s Gonna Be A) Jubilation.” Strummy acoustic guitars, tart mandolin and junkyard percussion clatter together as Marvin gives us some of that ol’ time religion. Written just a couple of years ago, it’s a hopeful anthem that presages the outcome of the contentious 2020 election cycle; “We won’t always be divided and torn, Lady Liberty, let everybody know, there’s gonna be a jubilation, all across the nation, there’s gonna be a jubilation from sea to shining sea.”

Other interesting tracks include the short, sharp soulful and succinct protest song “Wheels Of Freedom.” Shards of sandblasted feedback guitars collide with an oscillating beat, it owes as much to Television and the Velvet Underground as it does to “We Shall Overcome.” Conversely, “What’s The Mood Of The Country” is a raw and dissonant dirge that sums up our current cynical worldview thusly; “Don’t take candy from no stranger, unless he was born a baby in a manger.”

The album closes with “We Belong In America.” On this spare, yet courtly, acoustic lament, Marvin is joined by Academy Award-winning musician/composer Gustavo Santaolalla. Their friendship goes back almost 40 years when the celebrated Argentinian polymath was based in L.A. and fronting a Punk band called Wet Picnic. For this poignant immigrant saga, he adds some ronroco. The stringed, lute-like instrument, weaves expertly between the plainspoken vocals and filigreed fretwork.

Although some of these songs date back to different eras, the brilliant thing about this album is they all feel timely and timeless. To borrow a phrase from from the late, great John Lewis, “What’s The Mood Of The Country Now?” is good trouble.