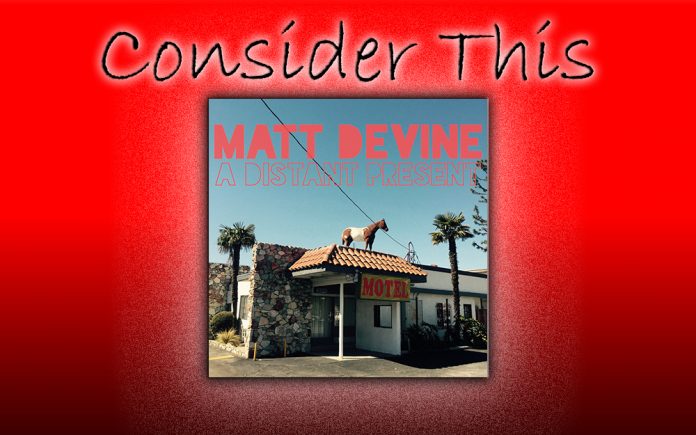 For most folks, the continued delight of loving music is the discovery of new artists, sometimes they’re right under your nose. That was my experience after hearing Matt Devine’s new(ish) solo album, A Distant Present.

A Los Angeles native, Matt grew up on the edge of the San Fernando Valley in North Hollywood. Apparently, he emerged from the womb loving the Beatles and quickly discovered the Monkees and the Rolling Stones. As a teen he took guitar lessons from legendary L.A. guitarist Click Mort (a.k.a. Christopher Doran) who briefly played guitar in the Cramps and also made his mark in the Loafin’ Hyenas.

Pretty soon Matt formed his first band, Lazytown. They hoped their sound would land somewhere between Big Star and the Flying Burrito Brothers, but in reality, it leaned a little closer to the primitive cool of The Replacements. One of the venues they played early on was Jabberjaw. It was there he met Michael Quercio.

In the late ‘80s/early ‘90s, Jabberjaw was an eclectic club that provided performance space for up-and-coming artists like Beck, that dog and Elliott Smith. Lazytown had broken up when Matt and Michael first connected. Michael’s well-known band, The Three O’ Clock, had recently ground to a halt as well.

Back in the early ‘80s, The Three O’ Clock had been ground zero for the Paisley Underground sound. A loose collective of bands that included the Bangles, The Dream Syndicate and Rain Parade, all managed to harness the D.I.Y. ethos of Punk, but pledged allegiance to the Baroque Psychedelic-Folk sound that characterized ‘60s bands like Love, The Merry-Go-Round, the Seeds and Buffalo Springfield, as well as darker elements like the Velvet Underground and Neil Young. Although each band was critically acclaimed, only the Bangles achieved commercial success.

Matt and Michael bonded over a shared affinity for the Byrds, the Left bank and the Stones. They played a couple of impromptu sets just for fun. Matt was impressed by Michael’s new songs, and pretty soon, they were recording 4-track demos together. It became more than a hobby when they invited drummer Chris Bruckner (formerly of the Marsupials) to join them.

Named for a song from the Godz second album, Permanent Green Light (PGL) was Michael on bass, Matt on guitar and Chris on drums. Michael and Matt split vocal duties and songwriting chores pretty evenly. An early champion was legendary KROQ DJ, Rodney Bingenheimer. He put PGL’s songs into heavy rotation on his show. Not long after, they were sharing stages with bands like the Fastbacks, Shonen Knife, The Muffs, Teenage Fanclub and Redd Kross.

PGL released an EP via the tiny Gastanka label but found a more permanent home at Rockville Records. Their lone long-player, Against Nature, was produced by Earle Mankey (20/20, The Runaways, The Long Ryders, Concrete Blonde and the Three O’ Clock). It received glowing reviews and they had cultivated a passionate fan-base, but national attention eluded the three-piece. Grunge and icky Rap-Rock were dominating the charts, edging out more interesting music. It felt like just as PGL was just getting started, things began to fall apart, so they called it quits.

Matt went on to form Ventilator, and they released two albums. He also toured with Medicine and was later a part of the band Possum Dixon. Michael and Chris added Brad Lindsey on guitar and Erik Trickett on keys and became Jupiter Affect. Early in the 21th century Matt and his wife relocated to Austin, Texas, lured by the thriving music scene. They were there a little more than a decade before returning to the City Of Angels.

In 2018, Omnivore Recordings released, hallucinations, a fairly comprehensive Permanent Green Light compilation. Renewed interest in the band resulted in a few live shows and soon, the ageless trio were back in the recording studio, relying once, again on producer Earle Mankey. Permanent Green Light’s new album is due in 2021.

Meanwhile, during this (never-ending) Covid quarantine lockdown, Matt dusted off some solo home recordings made mostly with friends during his tenure in Austin. Recently the ten tracks were mastered and the result is his official solo debut, A Distant Present.

There’s always that moment when you put on an album hoping for the best and fearing the worst. I knew Matt as the guitarist/vocalist for my favorite post-Paisley Thrash Baroque Power (Pop) trio, so I kinda knew what to expect. But as each song unfurled, I got this sort of musical um, lady-wood, that is few and far between at my advanced age.

The opening couple of tracks set the tone for the album. “Runaways Hide” simply roars out of the speakers, all pummeling drums, blitzkrieg bass and fuzzy guitars. Matt’s vocals are filtered and stuttery at first, but quickly return to his sunny boyish tenor. Opaque lyrics allude to something close to a Mile-High Club membership; “Feel the pressure drop, to lift your feet in the air/Let the static drop and occupy the seat of an empty chair.” Supersonic guitars hit the sound barrier on the break, before the whole enterprise winds down like wobbly aircraft making an emergency landing.

Second up is “Rail.” Had Gram Parsons ever collaborated with The Merry-Go-Round (R.I.P. Emitt Rhodes), it might sound like this irresistible slice of jangly Country-Pop. Chiming acoustic guitars connect with a clickity-clack beat, rumbling bass and keening pedal steel. Matt stacks harmonies, as lyrics seem to bemoan progress, yearning for old forms of public transportation like Red Line streetcars, instead of  the mostly underground Metro Rail; “The cars are parking down on the old rail line, I think the city is so cold-hearted/A transportational work of art is dead, another way out has been discarded.” Rippling power chords detonate like smart bombs the break, as feathery pedal steel notes dart along the edge, bookended by a pile-driving backbeat.

There’s an ache to “Wheels” that is neatly camouflaged by crashing drums, brittle bass and buzzy guitars. Matt’s crackly, matter-of-fact vocals almost obscure the lyrics’ tender reportage, observations gleaned while dealing with an elder with cognitive issues; “Leaving the books that were set by your bed and never read, wiping the tears from your eyes that you cried but never wept/When I look into you, you aren’t staring at me, you are peeping at someone you’ve never known.” A spiky guitar solo and a crushing primordial beat lock into a willful pas de deux, just before everything stops on a dime.

Conversely, “Leaving New York City” is a Countrified charmer powered by ringing electric riffs, sugary acoustic notes, loping bass lines and a snappy backbeat. Straightforward lyrics pick up the story of of a New York transplant yearning to escape the city; “She knows that life is beautiful, but in a winter way.” Matt’s sunny tenor conveys empathy and compassion. Flickering guitar licks on the bridge underscore the big decisions being made; “She sees the city fading, from a bedroom masquerading as a big jet plane/She has a family waiting, and she knows they’ll keep on waiting, in a winter way they stand in place.” Fat, teardrop riffs cascade on the break, as willowy acoustic guitars dovetail with honeyed harmonies, bringing the song to a close.

On an album stacked with superlative songs, three stand out from the pack. “Happy New Year” is a bittersweet bit of wishful thinking. Phased guitars fall in lock-step with boomerang bass lines, searing pedal steel and a Jazz-tinged shuffle rhythm. Guitars fracture in the echo and sway, and lines like “I can only blame myself for tomorrow, ‘cause I’m wishing for things I can’t have/Last year was such a bad one, spending all that time lying flat on my back,” seem tailor-made for these contentious and contagious days. Honky-Tonk piano notes peek out of the mix on the final verse as wordless vocals crest over the instrumental coda.

Meanwhile, both “You are My Radio” and “Compilation Tape” follow the Shakespearean edict; “If music be the food of love, play on.” The former toggles between moody and reflective, recalling a time when life was all romance and road trips, fueled by Rock & Roll. Clangorous guitars and a tick-tock rhythm give way to a pounding backbeat, wily bass and suitably Psychedelic guitars. The lyrics spotlight halcyon days of “Coffee cups and pills we stole, to stay up late… and singing ‘Na-na-na, na-na-na,’ you are my radio, the car ride’s long ‘cause the speaker’s blown.” Guitars cantilever, flash and strobe over a see-saw beat on the break, adding a hint of yearning and melancholy.

The latter is a Glam-tastic banger powered by angular guitars, tensile bass and a hopscotch beat. Sweet lyrics like “You are several of my favorite tunes, I’d sit there dreaming on and on, and make a compilation tape for you,” seem nostalgic for things that haven’t happened yet. At the same time, Matt includes a subtle shout-out to OG heroes like Big Star when he recalls “Late night on my apartment row, rewound to ‘O My Soul/Back then we had time to burn, but I can still return.” As the arrangement gathers speed, the beat gets stompier colliding with bubblegum crunch guitars that sting, strafe and shred until the plug is finally pulled from the amp.

Other interesting tracks include a shimmery take of Beck’s “Lost Cause” and “Flight To L.A.” a jittery instrumental that sounds like Donkey Kong meets Keyboard Cat. The album closes with the bare-bones “Take It Away.” Here it’s pared down to Matt’s coltish vocals and some sunshiny acoustic guitar. Lyrics like “City streets don’t wear down, as my feet fall to the ground/But all the gardeners hesitate, they grow their gardens and lock their gates,” seem to cautiously make peace with his hometown.

A Distant Present is one of those great albums that whizzes by in a brilliant blur. Sly melodies partner with sharp arrangements, crisp instrumentation, deft lyrics and sweet vocals. Stepping into the spotlight, (mostly) on his own, Matt has managed to create a sound that distills early inspirations like Flying Burrito Brother and Big Star without ever feeling contrived or derivative. More than a distant present, it’s the gift that keeps on giving.