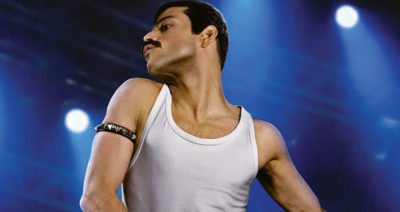 The main thing is the music and it sounds better than ever in state-of-the-art theatrical surround-sound systems like Mary Pickford’s D’place Entertainment.  That alone makes it a rousing and satisfying movie experience that in places feels like a concert.

But, with all the attention to period detail and the full-bodied portrayal of lead singer Mercury by Rami Malek, the film suffers from the anemic choices of director Bryan Singer and the result is a disappointing, flat affect.  Singer was fired from the film and replaced by Dexter Fletcher.

The conversations overheard after the screening centered on whether Mercury was really gay or bisexual and if he was portrayed accurately in the film. But the movie was not really about that.

Lead singer Freddie Mercury (born Farrokh Bulsara), defied convention to become one of the most beloved entertainers on earth.  The movie traces the explosive rise of the band through their iconic song.  The centerpiece of the movie shows Mercury’s lifestyle spiraling out of control when their triumphant reunion on the eve of Live Aid as Mercury faces a life-threatening illness. This fuels the band in one of the greatest performances in the history of rock music, forever cementing the legacy of a band as a “family.”  So much of Mercury’s life remains an enigma.  Although the movie tracks the rise and fall of both Queen and Mercury and there are many moments when Malek is utterly galvanizing as Mercury, but the movie was finally disappointing.

One moment of genuine surprise was an almost unrecognizable Mike Meyers as an EMI record executive. A sweet, sly tie-in to Meyers’ “Wayne’s World.” 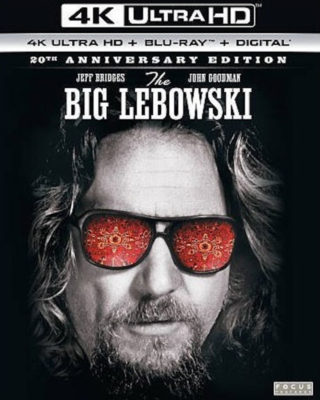 He’s The Dude, Duder, or El Duderino if you’re not into that whole brevity thing. Celebrate 20 years of His Dudeness with The Big Lebowski 20th Anniversary Edition.  There’s not much new to say about this beloved cult classic that still resonates on so many levels.

Even if you know this film by heart, the new 4K Ultra HD transfer is a jaw-dropping must-see and one for the home library (assuming you have a 4K TV player and compatible TV).  It’s hard to imagine how a film can look or sound any better.  The generous bonus features are all informative and engaging.  Universal Pictures Home Entertainment. 4K Ultra HD. 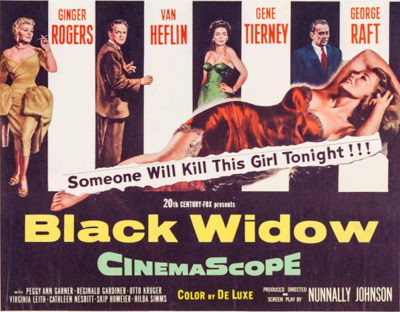 Writer-director Nunnally Johnson’s (The Grapes of Wrath) stylish widescreen Manhattan whodunit delivers some uptown lowdown combining the backstage bitchery with a murder mystery told in a narrative flashback structure reminiscent of Laura. Stunning cinematography and wonderful dialogue enhance this campy noirish goulash about a group of sophisticated theater-world New Yorkers caught up in the scheming plans of an ambitious young woman (Peggy Ann Garner). Among her victims are the good (Van Heflin, Gene Tierney) and the bad (Ginger Rogers, Reginald Gardiner), all being investigated by a tough NYPD officer (George Raft) after the malicious “cat among the pigeons” turns up dead. The lush Leigh Harline score is available on an isolated track.  Twilight Time Movies.

For movie buffs, the boutique distributor Twilight Time Movies (TTM) is a favored source for high definition transfers of classic and forgotten films that have been unavailable in a hi-def format for home viewing.

This week, I had the pleasure of sharing coffee and conversation at the Rancho Mirage Library/Observatory with part-time CV residents Julie Kirgo and Nick Redman, two of the creative minds behind the popular home video label.

Julie and Nick have ben together as a couple for 17 years, but got married only recently.  The charming couple has movies deeply embedded in their DNA.  Julie’s dad, George Kirgo, was a noted wit and prolific screenwriter (“Don’t Make Waves” with Tony Curtis and “Spin-out” with Elvis).  Nick’s background was with 20th Century Fox in the music department.

Twilight Time’s initial focus was on films of the 50s and 60s.  That great Cinemascope period of gorgeous widescreen entertainments that had it all – spectacle, scale and drama.”

Most of the major film studios no longer release these older titles through traditional retail methods. Now, they have embraced the manufacture-on-demand (MOD) method, releasing titles on DVD-R without restoration or extras.

We talked about the difficulty in locating prints and obtaining licenses from the rightful owner.  Some of the rival home video distributors are corporate funded enterprises  TTM is a modest, privately held operation with a small staff of true movie lovers and their exquisitely crafted  reflects this.

Forthcoming films the duo has expressed an interest in restoring and distributing under the TTM label include the full-length final film of Laurel and Hardy and the extended cut of cult favorite “Beat the Devil.”

So far, the TTM catalog includes 350 titles .  About half are sold out.

TTM limited edition titles are available at twilighttimemovies.com & www.screenarchives.com. Once they are gone – they are gone!