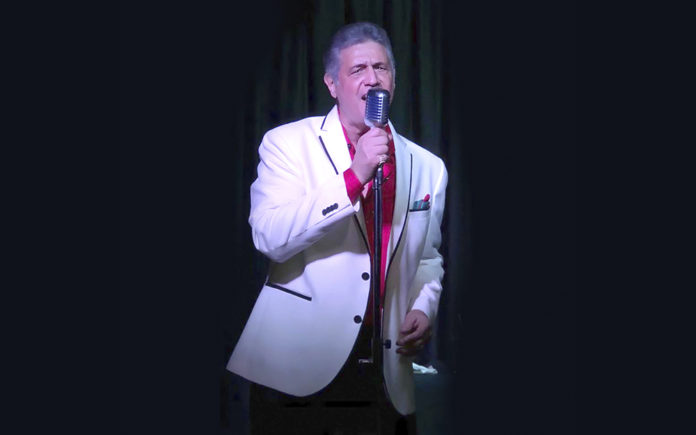 Join vocalist, Michael D’Angelo and Friends performing every Friday from 6 p.m. until 9 p.m. for Desert Dance Night with Dance Instructor Carl Davis in the Main Events Room at Venus De Fido, 73-600 Alessandro Drive in Palm Desert. They have a great venue with delicious food for every palate available for purchase from their Cafe. (760) 834-7070.

Born and raised in the Bronx, New York, D’Angelo was one of nine children; two sisters and six brothers. “When I was growing up, my Father had a little combo and played percussion,” which may be part of his love for music. “I picked up a lot of my stuff from the streets of New York. I did a lot of Doo Wop with a bunch of guys on the street corners, where I learned my harmonies.” He started singing at the age of 9. “When I was 11, my Mom used to take me to the local radio stations to sing, for exposure. Some of the stations would be in Manhattan.”

When he was 14 years old, the entire family moved to El Soreno, Los Angeles, California. There, he played the trombone in High School, formed a singing group and entered local talent contests. He served in the Army for three years and utilized the G.I. Bill and attended the Los Angeles City College. He met others who shared his passion for music and formed the band, Mestizo, which means persons of mixed ancestry.

His band opened for many artists like Tierra, Willie BoBo and Poncho Sanchez, to name a few and performed at the same venue with Los Lobos, when they were first starting out. “At college, they actually opened for us.” The band was invited to perform at the Pasadena Civic Auditorium for the Chicano Music Awards. They were honoring Cannibal and the Headhunters, who were one of the first Mexican-American groups to have a National Hit Record, “Land of a Thousand Dances,” and the opening act for The Beatles’ second American Tour. “We performed in front of 3,000 people and received a standing ovation.”

He worked for The County of Los Angeles for over 33 years and after he retired, he and his beautiful and very supportive wife, Patti, made the move to the Coachella Valley. “We would visit Patti’s relatives every Easter, and we fell in love with The Desert and after I retired, we decided to move here in 2007.”

Being retired and enjoying the Desert Lifestyle, he would often go out with friends. “When I retired, I didn’t come out here to sing. One of my neighbors took us to see Frank DiSalvo at the Indian Wells Resort. We met and when he started singing “Unchained Melody,” I was singing along at our table and he walked over and handed me the microphone and I finished the song. It was great.” A few months later, D’Angelo returned to the resort and became friends with DiSalvo, who gave him a variety of music tracks to sing with, so he could perform while he was on vacation.

D’Angelo’s repertoire includes a blend of classic favorites from the 50’s, 60’s, 70’s, Doo Wop, Latin Rhythms and some current Top 40 favorites and he sings a few Italian and Spanish favorites, too. He loves to move to the music and his music makes you want to dance, which easily explains his partnering up with Dance Instructor, Carl Davis.

“This is the second venue we partnered up for,” said Davis. “I have been here for almost 10 years and taught in several Country Clubs and Nightclubs.” He moved here from San Diego and also offers private lessons at his home in Palm Desert. (760) 567-0690.

“Dancing is a fun way to not only socialize, but also improve bone health, flexibility and coordination. Studies have shown that individuals who participate in a regular schedule of dancing, have superior performance in sensory, motor and cognitive areas. I know that women would appreciate it so much if their boyfriends or husbands would just try to learn to dance.”

A great venue, good food and fantastic entertainment, what more can you ask for?  A new dance floor…and guess what? It’s coming at the end of the month…