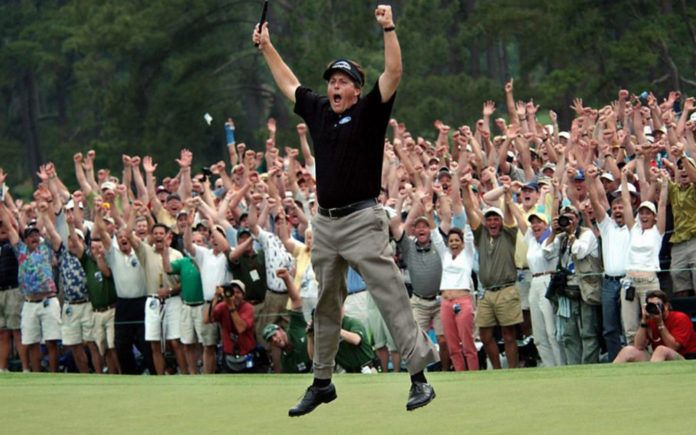 His path to victory was never going to be mundane. That is not Phil Mickelson, whose four-plus-year quest to add another title to his résumé finally ended Sunday in a playoff win over Justin Thomas, with potholes, detours and near calamities all part of the journey.

In just a small sample size from his weekend at the WGC-Mexico Championship, Phil brushed off one of his playing competitors because he mistakenly thought he was a media member; asked another one for the proper pronunciation of his first name; and gave a spirited tutorial, in Spanish, as to how he conducts his post-round autograph-signing scrums.

He also visited unknown parts of Mexico City with his wayward golf ball, somehow emerging in position to win his first tournament title since the 2013 Open at Muirfield. That he then made two closing birdies to force overtime and defeated one of the game’s best young talents in Thomas made it all the better.

Thomas’ rise, along with the exploits of No. 1-ranked Dustin Johnson, the emerging Jon Rahm, the ever-present Jordan Spieth, the bounce-back attempts of Rory McIlroy, the resurgence of Bubba Watson and the return to good health of Tiger Woods, makes for excellent golf fodder.

But it’s tough to beat the story of a Hall of Famer (who has a kid in college) beating kids who are just out of college. One who has nothing left to prove doing everything he can to prove he can still do it.

“I had confidence it was going to happen, and it means a lot to me to do it now, especially before Augusta,” Mickelson said. “As I said earlier, I needed to get a win before Augusta so I wasn’t trying to win for the first time in four and a half, five years at that event. This certainly boosts my confidence and gives me a lot of encouragement on the things I’ve been working on.”

Can there be a better lead-in to the Masters? Mickelson, 47, hasn’t won at Augusta National since 2010, but he’s been in the top three there twice in the past six years. Woods, undoubtedly, is pointing toward a big week at Augusta National, despite all of the inherent disadvantages he brings to the quest.

To that end, he somewhat surprisingly added this week’s Valspar Championship to his schedule to give himself more seasoning. You can be sure Mickelson’s victory adds even more motivation.

Mickelson’s ending his victory void also put to rest a rather remarkable oddity: Woods had won more recently than Lefty.

After Mickelson captured the 2013 Open, Woods won his 79th PGA Tour title at the WGC-Bridgestone Invitational two weeks later. Through injury and four back surgeries, Woods has played just 34 worldwide events since that win; Mickelson’s victory came in his 101st start since Tiger’s victory, a frustrating run that saw him switch coaches from Butch Harmon to Andrew Getson, but never give up on the goal.

“But knowing where my game was at heading into this year and believing in the fact that the results would come and then being patient and letting it happen, all of that has been an important part.”

Perhaps the best part is that Mickelson doesn’t believe he’s done winning. One of his big goals is making the U.S. Ryder Cup team for the 12th straight time — and winning for the first time in Europe. He has talked about winning the Masters and the U.S. Open. And getting to 50 career PGA Tour wins — he needs seven more.

And so if he didn’t realize that Shubhankar Sharma of India was leading the tournament Saturday, or if he didn’t know how England’s Tyrrell Hattonpronounces his name (Tier-ul), or if he went to great lengths to explain how he’d handle autographs. .. well, that’s Phil.

So is extracting himself from some precarious situations, as he had to do over the final nine holes Sunday in Mexico City, overcoming Thomas’ hole-out for eagle at the 18th.

“I just said I’m really proud of him,” Thomas, 24, said of his conversation with Mickelson afterward. “He’s been so supportive of me ever since I met him when I was 17. For someone at his stature at that time to reach out to me during amateur events, college events, to tell me I was playing well was so cool.

“Obviously I would have loved to drum him out there in that playoff, but I’m just happy for him and I just told him I know how hard he’s worked and I know how big and important the Ryder Cup is to him. And he’s playing some great golf.”

Mickelson has now finished in the top six in four straight events, including a win and a second-place finish. He has a few weeks off before his run-up to the Masters.

Meanwhile, Woods, Spieth and McIlroy are among the big names this week looking to grab the golf headlines while Mickelson enjoys the glow of victory.