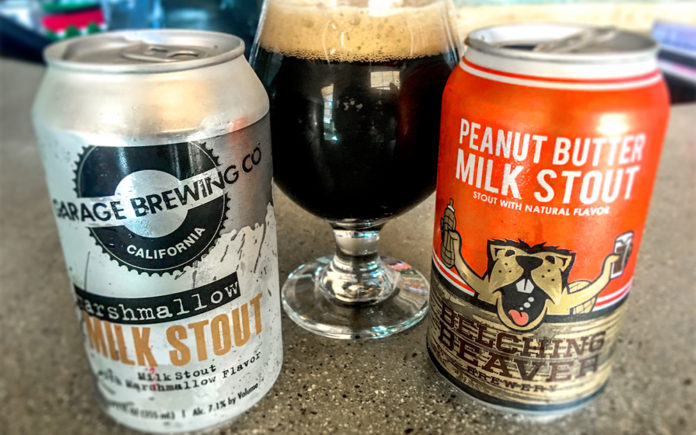 It’s a nice and crisp 52 degree evening and that’s perfect weather for stouts. With all the different flavors and varieties out there, you’ve got a stout for every taste, and two of the most popular in our region comes from Vista and Temecula, respectively. Both Belching Beaver Brewery and Garage Brewing Co have created their own signature twists on the classic milk stout by adding unique ingredients.

Their Peanut Butter Milk Stout is Belching Beavers number one selling beer, and the brew that put the brewery on the national map. I have several friends who swear by it and call it their favorite ever beer.

Garage Brewing Company has swiftly grown to become a very popular place for locals as well as visitors to stop and enjoy delish food and drink while in Temecula; their wide array of beers featuring fruit flavors and mild profiles have made them a very easy brand of beers for even non-craft lovers to enjoy.

Appearance: Canned in a 12 oz serving, with a warm colored orange and brown graphic that features an indeed belching Beaver holding a pint of dark beer in one hand (paw? Hoof?? Talon??? I dunno, I was never good at anatomy), and a nippled peanut in the other. I kid you not, the Beaver is holding a baby bottle in the shape of a peanut. The beer pours a flat black with brown edges, a tan head bubbles up for a few minutes before dissipating into some lacing across the glass and the surface of the beer. 4/5

Nose: smelling strongly of roasted peanuts, it dominates the nose with just a hint of herbal, grassy hops and malt sweetness behind it. Not a lot of complexity but I don’t think complexity was what they were going for. 4/5

Taste: Taste follows the nose with big roasted peanut flavors dominating the palate. The taste is more Planters dry-roasted than it is Skippy’s chunky; the savory and slightly saline taste of the nuts equally offset by the sweetness of milk sugar, and the herbal bitterness of assertive hopping. The coffee and baking chocolate flavors of the stout try to compliment the big, gaudy peanut notes, but they ultimately fall short. The flavor isn’t exactly complex, but that’s not what this beer ever claimed to be about in the first place. 3.75/5

Mouthfeel: medium bodied with a medium carbonation level. Entirely appropriate to style, but a thinner mouthfeel than anticipated. 3.5/5

Overall: a tasty milk stout that satisfies the craving for bold, roasted character. The liquid equivalent of a Dwayne Johnson movie, this beer offers fun without making you work (or think) too hard. 3.8/5

Appearance: a silver can with black typeface font, the words MILK STOUT stand out in toasted brown lettering. This beer pours jet black with edges that glow amber against the light. A khaki head retains its cap for a few minutes before dissolving cleanly and completely. 4/5

Nose: vanilla candy up front, the smell of marshmallows. A little bit of cola in the nose as well, the sugary smell of Pepsi is a bit surprising in a stout. 3.75/5

Taste: just like with Belching Beaver’s peanut butter stout, the taste follows the nose, with Vanilla Coke being the best way to describe the flavor.  Very soft bitterness allows the sweet components of the flavor to shine, but where are the roasty, coffee, baking chocolate notes that are supposed to accompany a stout? For 7.1% ABV, this is a deceivingly soft and light flavor, one that seems more a porter than a stout. 3.5/5

Mouthfeel: medium-thin body that washes over the palate rather than coats it. A fairly high level of carbonation doesn’t help the vanilla cola associations that my brain wants to make. 3/5

Overall: an interesting take on the style, but one that ultimately falls short of what they should have wanted to accomplish. One-dimensional and slightly anemic, it’s not a brew that calls for repeated draughts. 3.6/5

While both have their selling points as well as flaws, Belching Beaver’s Peanut Butter Milk Stout beats out Garage’s Marshmallow Stout by having a smoother, more balanced profile. If you haven’t had either, I’d recommend both for a try. Both companies have seen greater distribution for their products, and you’ll have no problem finding them wherever your local craft beers are sold.