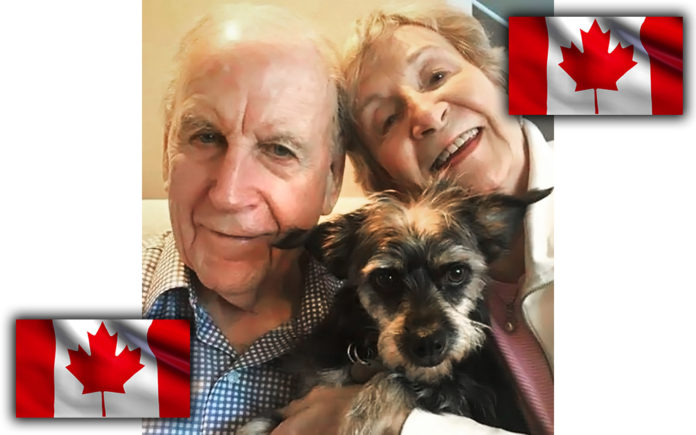 Brought in as a stray dog, Milo languished at the Ramona Humane Society shelter where no owner came to claim him, and no adopter selected him. Perhaps it was because he was a bit shy. Perhaps it was because 6-yr-old Milo was older than many of the other dogs. His shelter kennel card read “He is a wee bit overwhelmed being here at the shelter, but he is being brave and hoping for the best. Very sweet!” Loving All Animals rescued Milo, but no one could have anticipated the exciting adventure the small terrier would soon experience.

Safe in his foster home, Milo began to come out of his shell. Sadly, many prospective adopters in the senior age range themselves, thought Milo was “too old” and he was passed over in favor of younger dogs. But life often brings wonderful things to those who patiently wait.

Cheryl Simpson in Vancouver, Canada spotted Milo on Facebook. She is a close friend of Tracy Habijanac who works for Loving All Animals. Tracy, who is originally from Canada, explains, “There is a shortage of small rescue dogs in Vancouver, and throughout most of Canada. Cheryl and her parents fell in love with Milo’s sweet face, and he resembles Cheryl’s dog Tucker.”

Cheryl arrived at the Palm Springs airport two days later. Tracy obtained the needed health certificate and carrying case for Milo to accompany Cheryl on the return flight. Milo wasn’t a bit shy or hesitant as he climbed into his carrying case, already secure in the love surrounding him. There was a 15 minute lay over between flights, and Milo was on board tucked safely under Cheryl’s seat for the 3 hour return flight to a new life in Canada.

Cheryl, like many Canadians, is an advocate for adopting rescue dogs. She states, “There is a humble beauty to rescue dogs. Rescue dogs instinctively sense that they could die at a shelter. When you get the chance to love one, you will never find a more loyal and appreciative friend. They take a little time to change old habits, but they work really hard to overcome and want to love you. Rescuing and adopting Milo has given so much joy and energy to my parents. They were already engaged in many activities, but Milo has become such a character, he made their house a very chuckle filled happy home. My parents are madly in love with this special little dog.”

Today Milo is a happy pup, living the good life with Marilyn and Brian McMonigal. Marilyn reports, “Milo is so lively and perky we should have called him Wiggles! We’re older people and we wanted a slightly older dog. We knew as soon as we saw his picture he would be perfect for us. Since we got Milo, my husband’s health improved and his walk has become more spry as he walks Milo down the street.” Milo is enjoying the cool Canadian breezes in a snug little down vest, thriving in the love he never had before.

Did you know thousands of dogs are transported to Canada from overcrowded California public shelters where they would otherwise be euthanized? They don’t all travel like Milo, a single dog under a passenger seat. Several organizations fly entire planeloads of animals to a country where the vast majority of citizens are ardent animal lovers who spay and neuter their pets. For more information about adopting or fostering rescue dogs, contact Loving All Animals at (760) 834-7000, www.lovingallanimals.org. Coachella Valley, help us do better for these precious creatures who are so loving and loyal to us.