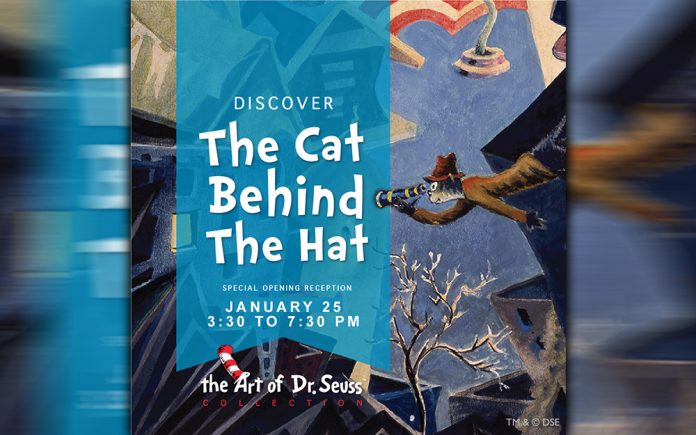 “Most Dr. Seuss admirers and art collectors don’t realize that Theodor ‘Ted’ Seuss Geisel, aka Dr. Seuss, was a classically trained fine artist who left behind an incredible collection of fine art, none of which was released or sold during his lifetime. After his death, his widow Audrey Geisel allowed its publication in limited editions with Ted’s prior permission. It was referred to at the Secret Art of Dr. Seuss and was a revelation to his fans and Pop Art collectors alike. This exhibition contains many of these fine art works,” noted Gallery Director Michael Fiacco. “We are changing the view of not only Dr. Seuss but of the artist Theodor Geisel.”

The Chuck Jones Gallery POPUP at the Gardens on El Paseo is presenting a unique look into this beloved children’s author. The Art of Dr. Seuss Collection will have an opening reception on Saturday, January 25, 2020 from 3:30 to 7:30. At the reception visitors will have an opportunity to learn more about these works from Seuss Fine Art Representative, Jeff Schuffman. The gallery will allow visitors to enjoy and acquire works from Dr. Seuss’s best-known children’s books, as well as works from The Secret Art of Dr. Seuss.

The Secret Art of Dr. Seuss includes artwork which Geisel created at night for his own personal pleasure. These fabulous works were never shown to the public until after his death in 1991. Following Geisel’s death, his widow Audrey Geisel donated more than 4,000 items, including original drawings and manuscripts, college notebooks, letters, to the library at UC San Diego. The collection is housed in the Geisel Library, which came from a $20-million donation from Audrey Geisel in 1995. She also discovered Seuss manuscripts that he left behind in desk drawers and closets. His book, What Pet Should I Get?, was posthumously released in 2015.

In her preface to the book on this collection, The Cat Behind the Hat, Audrey wrote “I’m gratified to carry out Ted’s wishes and have these works revealed to the world.” Audrey also stated in 2011 “I totally, wonderfully approve of anything that comes to light at this time of Ted’s work.” This collection does shed a different light on Dr. Seuss. The works clearly show a more sophisticated side of the creator of The Cat in the Hat.

In his work Geisel worked with a  variety of media although his preferred medium was watercolor. In keeping with the post-modernist tradition, Seuss is very experimental with his media. Like Fountain, a porcelain urinal signed R.Mutt produced by Marcel Duchamp in 1917, Geisel used unexpected materials such as hinged window frame and screen as a frame for one of his oil paintings. His sculptures are clearly within the postmodern style. His sculptures resemble hunting-lodge trophies in the forms of surreal or fantasy animals.

Included in The Chuck Jones Gallery collection are Dr. Seuss’s three-dimensional  Unorthodox Taxidermy sculptures with names like The Carbonic Walrus, The Two-Horned Drouberhannis, and the Goo-Goo-Eyed Tasmanian Wolghast, to name a few.

This is the third year that the Chuck Jones Gallery has had a POP UP in Palm Desert.  The POP UP is located across from Saks Fifth Avenue on the ground level. The gallery is open 11 to 6 daily; 12 to 5 on Sundays. Open late on Saturdays beginning Jan. 25th for concerts at the Gardens on El Paseo. The Secret Art of Dr. Seuss runs through 31 March. For more information, please contact the Chuck Jones Gallery Director of Special Exhibitions, Michael Fiacco at MFiacco@ChuckJones.com or at 206-226-8142.