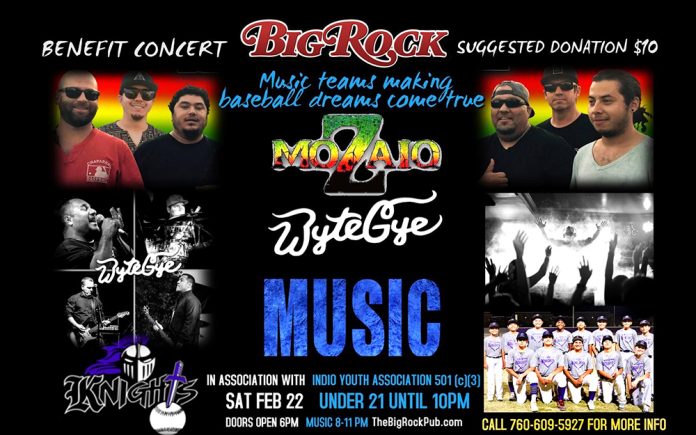 On Saturday, February 22 at 8 p.m., two local bands will be coming out swinging all in the name of the Desert Baseball Knights 12u team led by Head Coach Gil Sauceda and Assistant Coaches Michael Luna and Humberto “Bert” Vela. Desert Reggae band moZaiq and Rock reps Wyte Gye will be performing for the first time at the 2019 Coachella Valley Music Award winner for ‘Best Live Performance Venue’ Big Rock Pub to help the Knights get to Cooperstown this summer! The show is open to all ages until 10 p.m. Doors open at 6 p.m. and there is a $10 suggested donation. All of the proceeds benefit the team’s efforts to travel to New York and represent the Coachella Valley in a baseball tournament in June 2020 at All Star Village in Cooperstown, home of the National Baseball Hall of Fame and Museum.

Under the leadership of the Indio Youth Association (IYSA), the Desert Baseball Knights 12u Sauceda team is a local travel baseball team made up of 13 players. The players reside in various cities within the Coachella Valley and come from varied household income levels. It’s important to note that all players are required to tryout at the beginning of the travel baseball season and the focus of the coaches is to teach players about accountability, teamwork, sportsmanship as well as the fundamentals of the game to help them succeed in every sphere of life as they move forward into high school and college.

The 12u Sauceda team has been together for three years and have competed in various baseball tournaments throughout Southern California, Nevada, Arizona, Utah and Nebraska. Most recently, all the hard work and dedication has paid off as the team has moved up to the ‘Majors’ division level of competition and have earned the opportunity to compete against the top teams in the nation.

For the 2020 baseball season, the 12u Sauceda team will be competing in two major baseball tournaments on the East coast, Cooperstown, NY and Marietta, GA. The 12u Sauceda team is asking for the community’s support to help send the team to these tournaments and provide an opportunity for the players to travel outside of the Coachella Valley. This event will be a major step towards reaching their monetary goal.

Wyte Gye is scheduled to perform at approximately 8 p.m. so get there early. moZaiq will hit the stage immediately after and close the night out with their unique brand of Roots Reggae. There will also be raffles and other opportunities to give to the team throughout the evening.

“The name moZaiq is a metaphor for this band. We are individuals, who, like a mosaic, have been broken by life’s events and tragedies. We have bonded together for the common purpose of creating beautiful art through music. We feel so privileged and blessed to be able to perform music for people,” Diaz shared deeply. “Our goal is to have an eclectic sound like no other. Our music is heavily influenced by Roots Reggae with an R&B flow and Jazz and Hip-Hop infusion.”

“Reggae is ONE genre of music that not only speaks about the truth in ‘the struggle’ but it offers a solution in its message of revolution and global awakening through peace, love and unity of ALL people, ALL races, ALL religions, ALL nations. ONE LOVE …that’s what reggae means to us and that is what we, as a band, feel we are called to do; glorify God through our music. All while laying down a deep groove that people can feel and move to. We choose Reggae music over other genres because of the consciousness of the message and the unity it endeavors to create. We look forward to using that message for good as we support Desert Knights Baseball.”

Wyte Gye is more of a way of life than a cover band. Composed of four natives from the “Live Music Capital of the World” Indio, CA, Wyte Gye is the epitome of a “party band.”

Having performed at numerous Coachella Valley venues like Date Shed, Tack Room Tavern, Plan B Live Entertainment and Cocktails, The Hood Bar & Pizza, Red Barn and Schmidy’s Tavern with the likes of Queensrÿche, Soul Sign, Lynette Skynyrd, Remnants of Man, The Pedestrians, Waxy, Ozzmania, Dog ’N’ Butterfly, The Roads of Rome, Grand Scovell, Aphrodisiac Jacket, Mighty Jack, The Hellions, Blasting Echo, Long Duk Dong, In The Name of the Dead, Perishment, Boycott Radio and Redivider, Wyte Gye creates a festive atmosphere with its versions of some of rock’s greatest songs. The band has performed over 250 distinct hard and heavy classic rock songs during its almost 20 years of existence. Performing renditions of songs from AC/DC to ZZ Top, these ‘gyes’ know how to stay true to a song while putting their own stamp on it.

The band has not performed together in quite some time but they were quick to say, ‘yes!’ when their longtime friend and Knights assistant coach, Vela, asked them to help raise money for the team. Gutierrez recalls, “When Bert reached out to us, there was no question we would do it. Bert is one of the desert’s best musicians and human beings. We’ve known him for over 35 years and when you have that kind of history as friends and fellow musicians/bandmates, there are unspoken rules about helping and supporting. You just do it.” The band is known for their array of Rock songs and the fun they have with the crowd and each other on stage. All but Gutierrez are blood relatives, nonetheless, they consider each other family. “We’ve had a blast rehearsing and reconnecting and we can’t wait to rock out! We’ll have a special guest joining us on vocals too!”

Former bass players in Wyte Gye are a “who’s who” in the Coachella Valley on the four strings: Alfredo Campos (Odyssey 9), Robert Pickett (Barflys), August Arrowsmith and Armando Flores (Blasting Echo, 5th Town, The Pedestrians) are still endeared and highly respected as part of the Wyte Gye family.

If you like Rock or Reggae or both, this event brings both genres together in one night to help the Knights take the field of dreams.

If you are unable to attend, please consider donating to the team. Please make checks payable to ‘Indio Youth Sports Association’, with ‘Desert Baseball Knights 12u – Sauceda’ in the memo section.