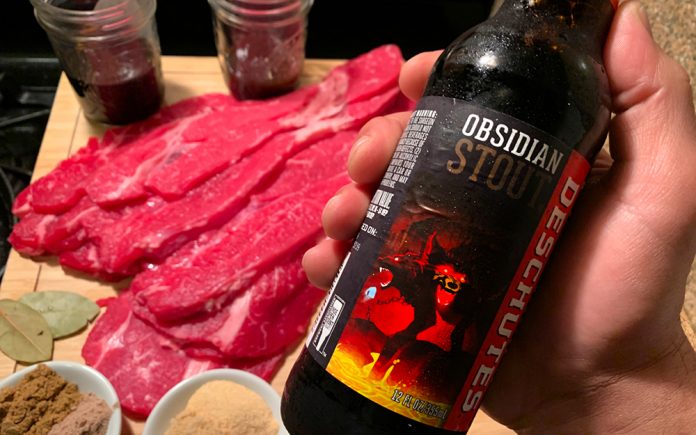 There are few meals in life more satisfying than a thick, juicy beefsteak. Whether you love a porterhouse or a rib eye, whether you prefer your beef seared over charcoal, or cooked with butter and herbs in cast iron, nothing is more tantalizing to carnivores than the smell of roasting steak. While a New York Strip or a T-bone may be the go-to cut for most meat lovers, there are tougher cuts of beef that are full of intense flavor, are cheaper on the wallet, and just require a little bit of preparation before eating. No dish exemplifies this more than the flavors found in carne asada.

Carne Asada is a Spanish term that when translated, simply means grilled meat, but in Mexican cooking it usually refers to marinated and grilled steak, sliced thin and served on tortillas or used as an ingredient in a variety of dishes. Carne asada is usually made from skirt steak, but flank steak, sirloin flap meat, even trimmed brisket works. Purists prefer to dust their meat in salt and spices just before grilling, but the tougher cuts of meat used for this method of cooking will always benefit from a marinade. Beer can be a powerful marinating agent, and is the prime ingredient in this version of a carne asada. We’re not going to waste our time with a Budweiser or Corona based marinade, we’re going for minimum effort and maximum gain, and for those results we’re going to need an American stout.

I specify American stout because your beer marinade is going to need alpha acids and tannins to break down the tough muscle fibers in the meat, and an American stout has both of those things in spades. I purchased three different stouts to try; Deshutes Obsidian stout, North Coast’s Old Rasputin Imperial Stout, and Great Divide’s Yeti Imperial Stout. While all three were delicious, I opted to use Deshutes Obsidian Stout for it’s (comparatively) more balanced flavor profile. Feel free to use an imperial stout if you want more intensity from your marinade. 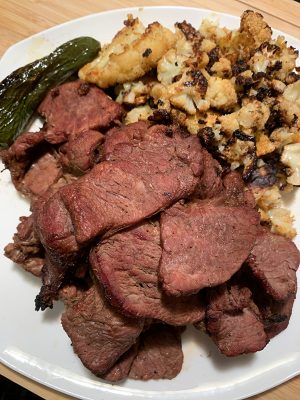 Traditional carne asada uses citrus juice to flavor and tenderize, but I opted to use Worcestershire and soy sauces instead. I even use ground cacao nibs to give the kind of earthy flavors reminiscent of mole. All of these components marry nicely with the stout, and give the meat a robust flavor that lovers of beef jerky will recognize, except in freshly grilled and tender cuts of steak.

More people are preferring to eat a plant-based diet, I am confident that the rich flavors of this recipe will marinade portobello mushrooms or tofu just as beautifully as it does beef.

STEAK: 2 lbs. of thinly sliced beef steak. Flank, skirt, sirloin or tenderloin, this marinade is optimized for tougher cuts of beefsteak. Portobello mushrooms absorb flavor nicely, and can be substituted for those who eat a meat-free diet.

BEER: 12 oz bottle or can of stout beer. American stout works best, as the flavors are more aggressive than an Irish stout like Murphy’s or Guinness. I chose Deshutes Obsidian Stout for the nice balance it has between, roasted, malty, and bitter.

Place the steak in a large Ziplock bag, pour in the marinade and place in the refrigerator. A 2-4-hour marinade is recommended, but longer than that risks turning your steaks into grey mush, as the marinade continues to break down the tissues in your meat (or shrooms).

Light your grill to high heat for direct grilling. 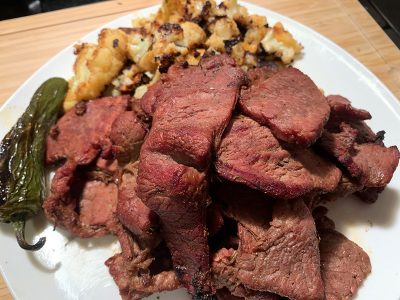 Thin cut steaks cook quickly, and this marinade ensures a nice caramelized finish from the brown sugar. You’ll only need about 5 minutes per side for medium, 8 for well done.

And there you have it, seared steaks that combine the roasted flavors of a stout with the umami found in soy sauce, the savory of Worcestershire, and the caramelizing properties of brown sugar. These steaks work well as a main dish or an ingredient in other dishes like a sandwich, taco or wrap.