If you are passionate about Rock & Roll, chances are, you geek out on it as much Comic Book aficionados and Sports enthusiasts do. But unlike the Justice League or Fantasy Football, Rock fans don’t really have an outlet to create all-star band line-ups anywhere but their own heads.

Who hasn’t wondered what it would sound like if Janis Joplin, Jimmy Page, Ray Manzarek, Paul McCartney and Keith Moon started a band? Or better yet, what if seminal bands cross-pollinated? Say Crosby, Stills and Nash added their high harmonies to the Allman Brothers’ brand of Southern Blues Boogie, or Brian Wilson’s sun-kissed arrangements surrounded John Lennon’s Scouse sarcasm.

These musical pipe dreams seem less fantastical when one listens to the Nap Eyes. It’s as though Lou Reed, Television, and Neil Young’s longtime backing band, Crazy Horse stopped at the Modern Lovers’ house and had a record party featuring vinyl by the Clean and the Only Ones.

Nigel and Brad originally connected in High School and again at Rock and Roll camp. Initially, Nap Eyes was a bit of a side  project, as  both Josh and Seamus play in the band  Monomyth  and Brad has a steady gig  with the Indie Pop trio, Each Other.

Despite other musical commitments, Nap Eyes were wildly prolific, cranking out two EPs, Tribal Thoughts and Four More Songs in 2011 and two more, Joint Uppers & Other Favourites and Dreaming Solo in 2012. Their full-length debut, Whine Of The Mystic arrived in 2014. 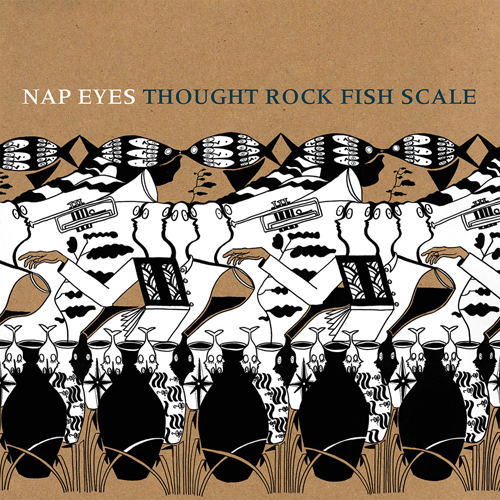 Less than two years later, they have just released their sophomore effort, Thought Rock Fish Scale. Returning to the studio with recording engineer (and Each Other guitarist),  Mike Wright, the album was recorded in just four days, live, to four-track tape with no overdubs.

Both “Stargazer” and “Don’t Be Right” add some Country twang to the band’s singular brand of angular Rock.  On “Stargazer” meandering guitar arpeggios crest over a tribal, tom-tom beat and spiky bass lines.

Chapman’s laconic tone belies the lyrics’ litany of insecure equivocations; “I have seen people go by me with such determination that it’s sick, I’d like to go to the places they don’t know how to get to but I can’t remember the trick/So I wait around and venomously crown myself serpent king of my sins/But if I go down I’m not taking you with me, it’s only myself in the end.”

The roiling bass figures and plucked guitar chords that parry and thrust on “Don’t Be Right” share some musical DNA with the Elvis Costello song, “Jack Of All Parades.” But suddenly, the melody see-saws on the chorus locking into a sweet, countrified lope. Again the lyrics tackle themes of social anxiety, cryptically insisting “Don’t be right, it isn’t good for you, you may not realize it, but it’s not.”

It’s clear that Nap Eyes owe a sonic debt to the Proto-Punk paradigm that Lou Reed invented with Velvet Underground, and that was later perfected by Jonathan Richman’s Modern Lovers along with Tom Verlaine and Richard Lloyd, from Television. This is never more explicit than on the song “Lion In Chains.”

Satellite (of love) riffs ping-pong through the airy arrangement of flanged and phased guitars, liquid bass fills and an unobtrusive rhythm.  Here, Chapman positively croons a veiled logorrhea that weighs the pros and cons of staying in one’s city of origin. “When I think thoughts about my home town, I sometimes feel like I’ll never get out of here/I feel a warm breath and a deadly uncaring power, and I wonder what it is that keeps me here.”

Another stand out track here is “Click Clack,” precisely because is eschews the mildly soporific spirit of the rest of the album. The tune starts off equal parts Bacharach Cocktail Jazz and swirly Samba with shaker percussion and strummy guitar. But the tempo becomes weirdly shambolic as Chapman confides “sometimes drinking I feel so happy, but then I can’t remember why/I feel sad all over again, sometimes drinking I don’t know my best friend for my best friend.”

Other interesting songs include “Roll It” and “Alaskan Shake.” The former is a skewed rollercoaster ride of neuroses. The latter blends mournful acoustic riffs with bowed electric notes that act as a Greek Chorus, underscoring the overall anxiety of the recording process.

The album closes with “Trust.” The prickly melody is powered by serpentine riffs that careen and skitter around rock-solid rhythm guitar, rumbling bass and a stuttery beat. Here, Chapman’s dissonant vocals strike the perfect balance between diffidence and self-assurance, as he insists, “I know you don’t trust me, I’ve got some things I need to tell you anyway/Sometimes I can hardly believe the way you don’t believe what I say.” It’s a bitter denouement.

Thought Rock Fish Scale is by turns terse and economic, potent and hypnotic, articulate and esoteric. Nap Eyes builds on the foundation that ‘60s and ‘70s progenitors created without sacrificing their own style. This time the fantasy is real.