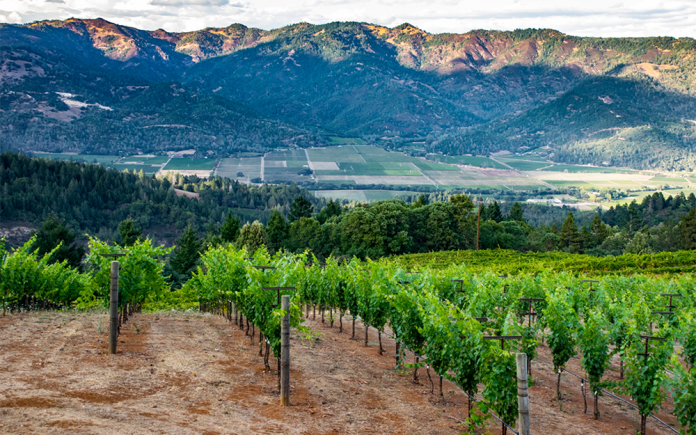 The famed Napa Valley is indeed that: a valley defined by its two mountain ranges, the Vaca and Mayacamas.  The Vaca range on the east edge owns volcanic soils and the Mayacamas on the west is formed primarily by marine sedimentary soils left by changing sea levels from the past million years.

California Cabernet Sauvignon quaffers generally fall into two camps: very broad and plush wines found in the vineyards on the valley floor, and the concentrated color and flavors along with vivid acidity from the mountains.

The mountain life of the Cabernet Sauv grape is different from the valley fruit.  Up on the mountains, there is more extreme constant sunlight and more diurnal shifts of temperatures between the days and the nights.  This is why the colors and flavors are more intense, more sharp, firmly structured, concentrated, and tannic—especially in their youth, and, an indication of complex aging in the bottle.

Wine Enthusiast recently wrote: Early in the history of the Napa Valley, before the absurdity of Prohibition, grape growers raised their sights. With many hailing from Europe, they understood how wine grapes love to dig deep into hillsides and mountains.

“Those pioneers—Jacob Schram, the Beringers, Charles Lemme and the Christian Brothers—gave way by the 1950s to a new generation. Such innovators as the McCreas, Al and Boots Brounstein, Dr. Jan Krupp, Piero Antinori, the Smith brothers, Bob Travers, Sir Peter Newton and others believed there should be distinct appellations for five of the Napa Valley’s highest mountains: Howell, Diamond, Spring, Mount Veeder and Atlas Peak.

What links the Cabernet Sauvignon from these mountains are their intensity and structure. Mountain fruit is often compact and concentrated its berries tiny from seasons of struggle and loaded with powerful tannins that take time to unravel. There’s also a distinct spectrum of earthiness in these wines, a product of their wilderness of forest and rock.

Further, mountain harvests tend to happen later, which allows winemakers to pick for flavor and at maturities that are ideal for Cabernet Sauvignon.”

So, without getting too nerdy on the mountain AVAs, and referring to writer Aaron Romano’s recent mountain vineyard article, here are just some quick comments on what one can generally expect from four popular mountain range vineyards:

Mount Vedeer AVA: Formalized in 1993 in the southern reaches of the Mayacamas Mountains, west of the towns of Napa, Yountville, Oakville and Rutherford. It sits between 500 and 2,600 feet above sea level and encompasses 25 square miles, which makes it one of the largest AVAs in the Napa Valley.

The second coolest AVA, in terms of daytime temperature, this mountain region’s growing seasons are longer than any other Napa appellation, sometimes even extending into November!

Spring Mountain AVA: Above the town of St. Helena on the eastern side of the Mayacamas, the Spring Mountain District became an official appellation in 1993. The thick presence of forest and the springs throughout the mountain give the area its name and personality, a world away from the valley below.

Romano writes: “Part of what makes Spring Mountain unique for grape growing is its nearly equal mix of sedimentary and volcanic soils.  Reflecting the location of vineyards, the wines can show very differently, depending on elevation, exposure, and soil. The region gets its name from the numerous natural springs that run through the appellation.

The balance of dark and red fruit, the floral nature and the elegant tannic structure defines the AVA relative to the other mountain regions.

Intense sunlight hits a mix of white volcanic ash and red clay soils that are lean and possess good drainage. Howell Mountain’s rockiness distinguishes it from hillside vineyards across the valley in the Mayacamas Mountains.

That rockiness often means there’s little water-holding capacity in the soils. The resulting wines are known to be deeply intense and rugged, with a great concentration of black fruit, dark color and hints of menthol and mocha.

Diamond Mountain AVA: Romano writes: “Named for the sparkling volcanic glass and obsidian rock sprinkled throughout its soils, Diamond Mountain traces its origins to one of Napa’s earliest pioneers, Jacob Schram, who purchased 200-plus acres in 1862 and started developing vineyards for what would become Schramsberg Vineyards.

Today, much of this region remains undeveloped, with just 500 acres under vine, making it the smallest AVA in all of Napa Valley.  The region rises above the city of Calistoga, and includes numerous, steep, unplantable hills surrounded by dense forest.

In general, these Cabs show typical mountain fruit structure and intense tannins, along with lively acidity—all which can lend an austere quality to the wines in their youth.

And now—our Napa Mountain wine of the week:  2018 Mayacamas Cabernet Sauvignon Mount Veeder ($150) This wine opens with florals of fresh lilac and violet with a palate containing notes of just ripe raspberry, blackberry, and cherry. Framed by secondary tones of dried sage, anise, and cardamom, this wine includes tones of pine resin, graphite and tobacco and features a long finish.

Cheers to the mountain high!