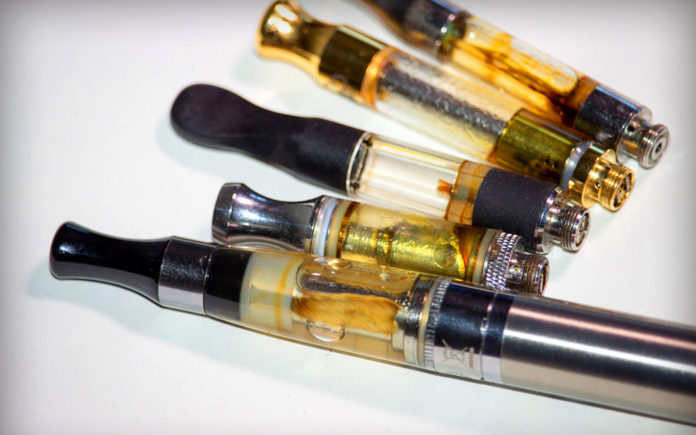 The CDC government media on August 23, 2019, released a Telebriefing on Severe Pulmonary Disease Associated with Use of E-cigarettes. An audio of the briefing can be found on their website https://www.cdc.gov/media. As of August 22nd, between June 28th and August 20th of this year, there were 193 potential cases, in 22 states of severe lung illness associated with e-cigarette product use. One death has been reported in Illinois.

Evidence does not suggest that an infectious disease is a principle cause of the illness.  Investigators have yet to identify any product or compound linked to all of the cases, but two are implicated is a few. They are Dank Vapes and West Coast Carts.  Symptoms included breathing difficulty, shortness of breath, gastrointestinal illnesses as well and/or hospitalization. Before June 28th people have been vaping from illicit places without illness. What changed in the street market now?

California has 24 suspected cases of the hyper-inflammatory lung response, first identified in the town of Hanford on Aug. 14 after seven young adults all suffered from sudden acute respiratory distress in the past month. The common thread: each patient had purchased disposable, THC-filled vaporizer cartridges from an illegal street market. Most importantly, no cases are associated with adult-use or medical cannabis products from legal state-licensed stores. The 24 suspected cases occurred in Kings County which has banned licensed cannabis stores.

We have never had clusters of health crisis before. Cannabis is a $52 billion US industry, according to the RAND Corporation. Legal state-regulated sales represent $11 billion of the total—only 21%. That leaves a massive $41 billion illegal market open to anybody willing to take the legal risks necessary to supply the demand. Without lab testing, vapers often judge the THC potency of a cart by the thickness of the oil in the chamber. Thick oil has become a proxy for purity. Thin oil is a red flag.

Lab tests have caught new novel cutting agents that make the oil flow called Thick or Honey Cut. This new additive may or may not play a role in the current health crisis. Pesticides, residual solvents, minerals, mold, heavy metals, and synthetic cannabinoids or anything in the formulation of the product in illicit-market cannabis vape carts are under scrutiny.

Ben Disinger, the marketing manager of True Terpenes said, in-house testing revealed a suspected substance known as tocopherol-acetate, usually found in skin creams. The National Institutes of Health database Pubchem.com states that inhaling tocopherol-acetate can cause wheezing, coughing, shortness of breath, and burning in the mouth, throat or chest, and could potentially lead to hospitalization. The use of an illegal off label ingredient could be the culprit. One example is the use of Uber Thick which is used legally for terpenes.

How should the public act on this information. The main message is buying the vape pens in legal dispensaries. This will insure testing is done on required elements: physical contaminants, heavy metals, potency, contamination, chemical contaminants, microbial contaminants, comprehensive cannabinoid and terpene profiling. Using cannabis flower in vaporizers is another safety measure. Openly discuss safe marijuana use with your young adults up to 21 years of age. Do not buy in smoke shops. It would be safer if the adult parent would purchase the legal vape pen rather than trust the young adult to his/her spontaneous whimsy. Supervise its use similar to introducing young adults to alcohol consumption.

There are those who believe binge drinking started when the drinking age was lowered from 21 to 18. We know when alcohol was prohibited people resorted to bootleg liquor which lead to many sicknesses. Could the legal limit of 21 for marijuana be a factor in teen use of illicit vapes? It is an idea worth discussing.

Ruth Hill is a cannabis lecturer and consultant. Find her at hilruth@gmail.com