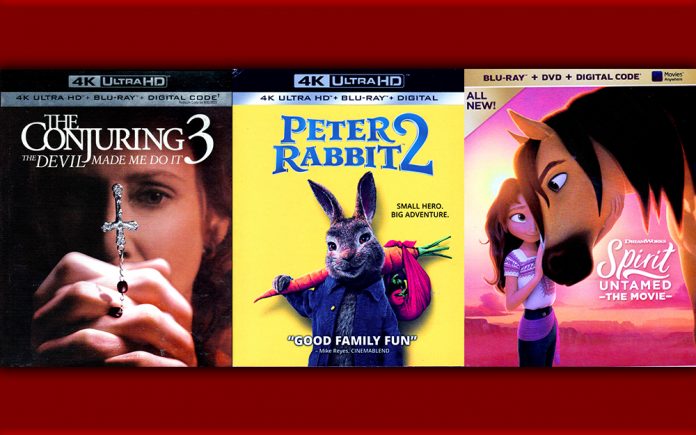 There’s something satisfying about actually owning the physical disc of a new movie that’s fundamentally different from “owning” a digital copy or steaming a video on demand.

With the latest surge in the never-ending Covid-19 Delta variant, it’s no longer as tempting as it was when we assumed (falsely) that the pandemic was essentially over.

Here are three new titles to consider owning for the home movie library.

The loveable rogue rabbit is back.  Bea, Thomas, and the rabbits have created a makeshift family, but despite his best efforts, Peter can’t seem to shake his mischievous reputation.

Adventuring out of the garden, Peter finds himself in a world where his mischief is appreciated, but when his family risks everything to come looking for him, Peter must figure out what kind of bunny he truly wants to be.

Co-writer and director Will Gluck’s bright, beautifully crafted family film is a delight for young and old whether or not you are familiar with the classic children’s story.  The stellar cast includes: Rose Byrne, David Oyelowo, Elizabeth Debick, Margot Robbie and James Corden, who brings Peter Rabbit to life.   Sony.  4K Blu-ray/DVD combo.

THE CONJURING 3: THE DEVIL MADE ME DO IT

The latest iteration of the popular horror franchise reveals a chilling tale of terror, murder and unknown evil that shocked even experienced real world paranormal investigators Ed and Lorraine Warren.

Among the most sensational cases of their extensive files, it starts with a fight for the soul of a young boy, then takes the Warrens beyond anything they’d ever experienced before, to mark the first time in U.S. history that a murder suspect would claim demonic possession as a defense!

Bonus elements in the 4K UHD combo and Blu-ray pack include:

“The Occultist” – Meet the terrifying new addition to the Conjuring Universe

“DC Horror Presents the Conjuring: The Lover #1 – A video comic that takes you deeper into the Conjuring Universe.

In co-director Elaine Bogan’s engaging story of friendship, adventure and family, free spirited Lucky Prescott moves to Miradero to reunite with her estranged father.  She is decidedly unimpressed with the sleepy town until she discovers a unique tie to her late mother who was a fearless horse-riding stunt performer.

Lucky quickly forms a bond with a beautiful wild mustang named Spirit and makes two new pals who love horses as much as she does.

When a heartless wrangler plans to capture Spirit and his herd, Lucky and her friends set off on an epic quest to rescue the horse who has given Lucky an unbreakable connection to her mom’s legacy.  See if you can spot the voice acting by Julianne Moore and Jake Gyllenhaal Dream Works/Universal.  Blu-ray/DVD.