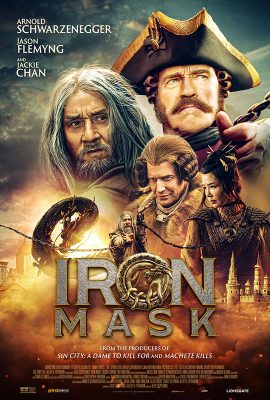 For the first time ever, screen legends Arnold Schwarzenegger and Jackie Chan face off against each other in battle in this epic fantasy-adventure in order to save his homeland from certain doom, a kung fu master (Chan, of course) must escape from the maniacal James Hook (Schwarzeneger) in order to send his daughter a secret talisman that will allow her to control a massive and mythical dragon.

This larger-than-life, globe –trotting tale makes stops at the impenetrable Tower of London, the fabled Silk Road and China’s Great Wall also stars Rutger Hauer in one of his final screen performances.

This highly incoherent, derivative and mostly laughable hodge-podge of a movie was directed and co-written by Oleg Stepchenko and appears to be a Chinese/Russian (?) production. On the plus side, there are unexpected moments of painterly beauty amidst the overwhelming sequences of CGI action and digital enhancements (if you can call it that?). Lionsgate. Blu-ray 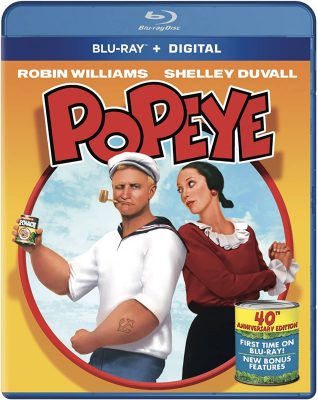 The beloved anvil-armed sailor of the seven seas comes magically to life in this greatly anticipated first time Blu-ray transfer from Paramount.

Starring the incomparable and greatly missed Robin Williams in his first-ever big-screen role and Shelley Duvall as his devoted sweeties, Olive Oyl, the delightful musical celebrates its 40th anniversary this year, having debuted in theaters on December 123, 1980 (has it really been that long?)

Legendary producer Robert Evans and screenwriter Jules Feiffer worked for nearly three years to get POPEYE into production. The film combined the talents of Robert Altman, composer and lyricist Harry Nilsson, numerous filmmaking artisans, and an outstanding cast of actors, mimes, athletes and street performers to bring the world of the beloved comic strip character to life. The result is an uplifting and visually delightful film that celebrates the magic of what Altman called “a genuine American hero.”

“The Return to Sweethaven: A Look Back with Robin and the Altmans.”

THE GODFATHER CODA: THE DEATH OF MICHAEL CORLEONE 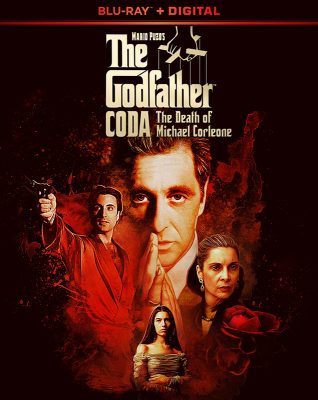 Just in time for the 30th anniversary of The Godfather: Part III, director/screenwriter Francis Ford Coppola has re-edited the final film in his epic Godfather trilogy. This new version, entitled Mario Puza’s THE GODFATHER, Coda: The Death of Michael Corleone, achieves Coppola and screenwriter Puzo’s original vision of the finale, which has been meticulously restored for the finest presentation of the Corleone saga’s last chapter. The film will be available to exclusively won December 8 and will also debut in select theaters (good luck with that) on December 4.

Coppola said: “For this version of the finale, I crated a new beginning and ending, and rearranged some scenes, shots, and music cues. With these changes, the restored footage and sound to me, it is a more appropriated conclusion to ’The Godfather’ and ‘The Godfather: Part II’ and I’m thankful to Jim Gianopolus and Paramount for allowing me to revisit it.” 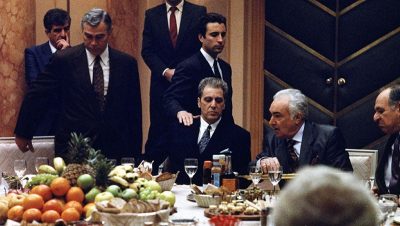 Coppola and his production company American Zoetrope worked from a 4K scan of the original negative to undertake a painstaking, frame-by-frame restoration of both the new Mario Puzo’s THE GODFATHER, Coda: The Death of Michael Corleone and the original The Godfather: Part III.

In order to create the best presentation possible, Zoetrope and Paramount’s restoration team began by searching for over 50 original takes to replace lower resolution opticals in the original negative. This process took more than six months and involved sifting through 300 cartons of negative. American Zoetrope worked diligently to repair scratches, stains, and other anomalies that could not be addressed previously due to technological constraints, while advancements were made to the original 5.1 audio mix. The Blu-ray presentation will include the newly restored and re-edited film, an exclusive introduction by Coppola as well as access to a digital copy of the film.

Coppola’s masterful film adaptation of Puzo’s novel chronicles the rise and fall of the Corleone family and the saga is rightfully viewed as one of he greatest in cinematic history. The Godfather Part III was nominated for seven Academy Awards®, including, Best Picture and Best Director. The film follows Michael Corleone (Al Pacino), now in his 60s, as he seeks to free his family from crime and find a suitable successor to his empire. From Paramount Home Entertainment. Blu-ray