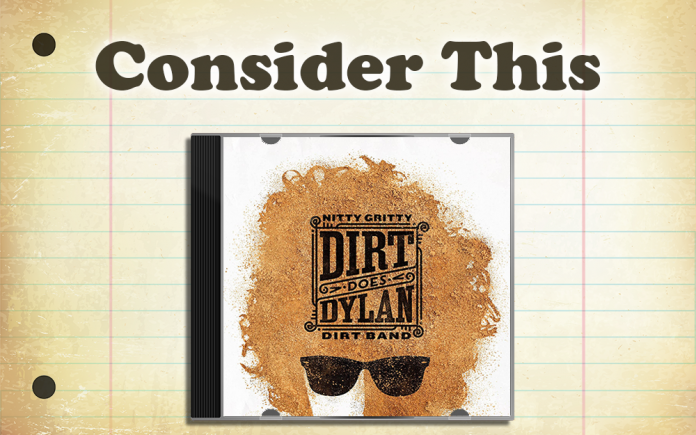 Nitty Gritty Dirt Band has been a going concern since 1966. Founded in Long Beach by Jeff Hanna and Bruce Kunkel, throughout the decades, it’s ranks have included future superstar singer-songwriter Jackson Browne and multi-instrumentalist John McEuen. The latter stuck around from 1966 to 1986, returned in 2001 and left again in 2017. Jeff and drummer Jimmie Fadden have remained the band’s backbone for over half a century.

The latest line-up includes Jeff and Jimmie, as well as Bob Carpenter who joined back in 1977, Jim Photoglo and Ross Holmes who joined in 2016 and 2018, respectively. Another 2018 addition is Jeff’s son Jaime, who made is bones in the Mavericks and as half of Hanna-McEuen, a duo he formed with his first cousin and son of NGDB stalwart, John, Jonathan McEuen.

NGDB is probably best known for their chart-topping rendition of the Jerry Jeff Walker’s “Mr. Bojangles.” Their sound has always been an appealing amalgam of Country, Rock, Folk and Bluegrass. So, it seemed wholly apropos when they reached out to Country pioneers like Roy Acuff, Mother Maybelle Carter, Earle Scruggs, Merle Travis, Doc Watson and Jimmy Martin to create Will The Circle Be Unbroken in 1972. Arriving that same year, it featured the “…Bojangles” hit and bridged the generation gap between the long-haired West Coast Rockers and Grand Ole Opry mainstays. It was so successful, that a volume two hit stores 1982 and a third volume popped up in 2002.

All told, over the last five decades, NGDB has recorded 26 studio albums, three live efforts and won three Grammy Awards along the way, it’s been about 13 years since their last album, Speed Of Life. But the seeds for their new record were planted back in December 1964 when Jeff saw Bob Dylan perform at a Long Beach high school. Just a teenager at the time, he absorbed all the bard of Hibbing, Minnesota had to offer. It was a few months before His Royal Bobness had stunned the crowd at the Newport Folk Festival by plugging in and going electric, and Jeff was transfixed. After that, learning and playing Dylan songs became a rite of passage for the budding musician and his friends.

All the members of the Nitty Gritty Dirt Band (past and present) had cut their teeth on Dylan’s music, so it felt like a no-brainer to record an album of his songs. The question was which ones? Now in his 81st year, the former Robert Zimmerman has written well over 500 songs. Initially, NGDB winnowed it down to 80 favorites, sifting through those, they cut that number in half and headed into the studio. The result is a lean and unfussy 10 song set, pithily entitled Dirt Does Dylan.

The record kicks into gear with a brawny take on “Tonight, I’ll Be Staying Here With You.” Originally found on 1969’s Nashville Skyline, a Countrified detour that also included his louche, but enduring hit, “Lay, Lady Lay.” The instrumentation and arrangement threads a colorful tapestry of swoopy fiddle, subtle piano notes, sylvan mandolin and swampy guitars. Jeff’s exuberant tenor takes the lead, Jaime shadows him on the chorus, and the paternal pride is evident. Veering from his usual cryptic and caustic path, Bob’s lyrics are positively unambiguous as he signals his intent to ditch his itinerary in order to spend more time with a recent carnal conquest; “Throw my ticket out the window, throw my suitcase out there too, throw my troubles out the door, I don’t need them anymore, cause tonight, I’ll be staying here with you.”

In his earliest incarnation, Dylan’s relationship songs ping-ponged between two leitmotifs: wild infatuation and devastating disinterest, those scenarios play out with yin yang duality on “Girl From The North Country” and “Don’t Think Twice, It’s Alright.” Both songs surfaced on 1963’s The Freewheelin’ Bob Dylan. “Girl…” is a sweet encomium to a former flame, powered by willowy acoustic guitar, feathery fiddle, thrumming bass, cascading mandolin licks, woozy harmonica and a percolating beat. Jaime takes the lead, his clear and boyish tenor evince all the vulnerability and ache in lyrics that like “I’m a-wondering if she remembers me at all, many times I’ve often prayed in the darkness of my night, and the brightness of my day.” On the break, as well as the extended outro, the instrumentation centers around a wily guitar solo, shimmery mandolin, slow-cooked fiddle awash in longing and grace.

The instrumentation on “Don’t…” is spare and bare-bones, just finger-picked acoustic guitar and smoky harmonica. Rather than replicate Bob’s dismissive sneer, Jeff’s manner is rueful and resigned, Bob Carpenter and Jaime add some honeyed harmony to the song’s most cavalier verse; “I’m a-thinking and a-wonderin,’ walking down the road, I once loved a woman, a child I am told, I gave her my heart, but she wanted my soul, but don’t think twice, it’s alright.”

The band receives a couple of superstar assists on “I Shall Be Released” and “The Times They Are A-Changin.” The former features Larkin Poe, the sisterly duo of Rebecca and Megan Lovell, whose Gospel-Blues inflected vocals have been cutting a swath across Nashville since the early aughts. One of his most evocative tracks, it was a hit for The Band in 1968, three years before Dylan recorded a solo version. Stately piano, plaintive guitar, gossamer mandolin notes and lonesome lap steel wrap around a yearning melody. Bob is up front here, reinforced by Larkin Poe’s grit and gravitas. A song of redemption and grace, it’s comprised of three powerful verses that long to break the chains of bondage; “They say every man man needs protection, they say every man must fall, yet I swear I see my reflection some place so high above this wall, I see my light come shining, from the west unto the east, any day now, any day now, I shall be released.” A sturdy acoustic solo on the break is supplanted by slithery electric riffs that underscore the lyrics’ resolve.

The latter features a who’s-who of alt.country royalty. NGDB is joined by Jason Isbell, Rosanne Cash, Steve Earle, Matraca Berg and the husband/wife duo of The War And Treaty, along with Jeff, each one sings a verse and their voices intertwine on the chorus. Accompanied only by strummy guitars, wheezy harmonica, whispery pedal steel and a thumpy beat, it achieves campfire sing-a-long verisimilitude. A timeless protest anthem written nearly 60 years ago, lyrics like “Come senators and congressmen, please heed the call, don’t stand in the doorway, don’t block the hall, for he that gets hurt will be he who has stalled there’s a battle outside and it’s ragin,’ it’ll soon shake your windows and rattle your walls, for the times, they are a-changin’” resonate right now, as this supreme court does it’s damnedest to strip away our rights.

They whip out a Highway 61 Revisited deep cut, “It Takes A Lot To Laugh, It Takes A Train To Cry.” A Bluesy shuffle, it’s anchored by ornery harmonica, muscular guitars, angular bass, lowing Hammond B3 and a loping backbeat. Jimmie takes the lead here, and his mien is suitably frisky as he goes about wooing his woman; “Don’t the moon look good, mama, shinin’ through the trees, don’t the brakeman look good mama, flagging down the ‘Double E,’/Don’t the sun look good, goin’ down over the sea, don’t my Gal look fine when she’s comin’ after me?” On the break, a slide guitar solo stealthily uncoils, bookended by fluttery mandolin and harmonica accents.

Finally, they tackle the evergreen “Forever Young.” The wistful lullaby Dylan wrote for his eldest son, was featured twice on his (wildly underrated) 1974 album, Planet Waves. Backed by The Band, there was a rollicking version and a more contemplative take, NGDB strip both versions for parts, then reassemble an appealing hybrid of the two. Darting harmonica runs partner with honeyed mandolin, spiraling guitars, lush Hammond B3, wily bass lines and a propulsive beat. Jeff, Jaime and Bob all take a turn in the spotlight, underscoring some of His Bobness’ most poignant and heartfelt lyrics; “May you grow up to be righteous, may you grow up to be true, may you always know the truth and see the lights surrounding you/May you always be courageous, stand upright and strong, may you stay forever young.”

Other interesting tracks include the back porch ramble of “Country Pie,” and the shaggy and shambolic “Quinn The Eskimo (The Mighty Quinn).” Landing somewhere between Manfred Mann’s sleek British Invasion rendition and Dylan’s more laissez-faire original. The first verse is unadorned acapella featuring Jeff, Bob, Jaime, Ross, Jimmie and Jim, then the band kicks in, layering in liquid mandolin notes, blustery guitars, nimble bass lines and a see-saw rhythm. It’s a ramshackle finish to a great record.

Nitty Gritty Dirt Band acquits themselves beautifully on Dirt Does Dylan. The record is suffused with love, admiration and respect for Bob Dylan’s prodigious songcraft. These talented pickers and players pay as much attention to the melodies as they do the perspicacious lyrics. Teasing out the arrangements and instrumentation, without ever drifting into dreaded Jam band territory. The best part is, with 70 more “favorites” to choose from, hopefully there will be a few more volumes down the road.