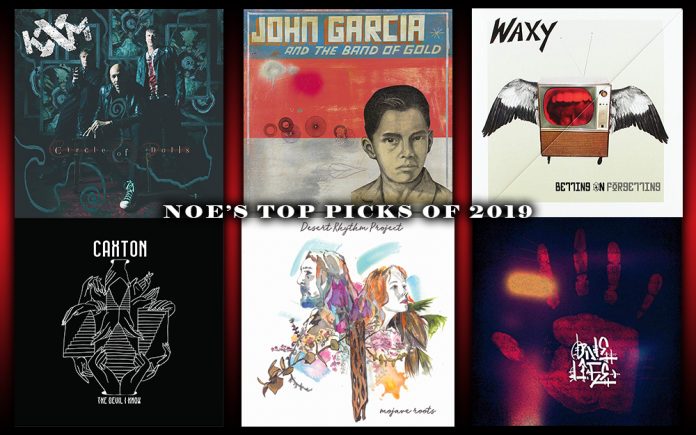 Dug Pinnick (King’s X), George Lynch (Dokken, Lynch Mob) and Ray Luzier (Korn) are maybe the best three musicians you could put in a studio and guarantee a kick-ass outcome. Circle of Dolls follows the first two standout albums Scatterbrain and KXM. I got to interview and hang out with Pinnick when his band 3rd Ear Experience performed at The Hood Bar and Pizza in Palm Desert. He shared about his time in KXM, “I’m tired, excited, overwhelmed and living the dream with no complaints whatsoever. I take it all! It’s all a part of this journey.”

By far the most talked about and anticipated album of the year of any genre. Not quite as long a wait as Guns N’ Roses’ Chinese Democracy, but a much better payoff. Also receiving Grammy nominations for Best Rock Song and Best Metal Performance, the album is destined for inclusion in the annals of Rock as a teaching point in how to return from a long recording hibernation. I’m gladly still in the process of interpreting the album.

With almost 50 musicians featured on the album, Bon Iver’s boasting blend of R&B almost philharmonic arrangements earned 2020 Grammy nods for Album of the Year, Best Alternative Music Album and Record of the Year for the track Hey, Ma. Justin Vernon takes me on an adventure into sound and when I close my eyes, I feel the “good winter”.

The Raconteurs – Help Us Stranger

With their last release in 2008, it’s a shame we don’t see a more regular release cycle from Jack White’s gritty quartet. Each song provides me a separate personality to be diagnosed. With over a decade since their last release Consolers of the Lonely, the album has had mixed reviews but I read through the B.S. of high and mighty analysts who attempt to tear it apart instead of piece it together.

True American Rock is how I describe the 6th studio album from the band from Long Beach, California. Jay Buchanan’s vocals are the stuff legends are made of. That bluesy edgy Rock and Roll takes the Led Zeppelin sensibility to the heavens and beyond. I truly feel they will carry the torch with conviction.

You only have One Life according to Provoked and this album tells you why. It talks about his beginnings, reflection, positivity, his return, and has several reminders to persevere and have “hella-fun”.

The long awaited second release from Christina Reyes, vocals and keyboards, Adam Surdin, guitar, Brett McLaughlin, bass and Brian Pelletier, drums is as much a new journey as it is a continuation of where they left off. The album is liberal Caxton and its members have illustrated what you can achieve with durability, devotion, mutual discernment and appreciation in long distance relationships.

The long-awaited breakthrough album from the desert’s dynamic duo of Mikey Reyes (vocals/guitar) and Bryanna Evaro (bass/vocals) along with Tyler Saraca (drums) and David Yuter (keyboards) is a soulful representation of Reyes’ purpose; Reggae, Funk, Roots and Soul.

John Garcia and The Band of Gold released their self-titled album in early 2019 through Napalm Records and produced by the illustrious Chris Goss (Kyuss, Queens of the Stone Age). After first listen I was convinced that the music was written and recorded with the live setting in mind. They are a band built for live performance. 30 years after forming Kyuss, Garcia continues to hold his own with Ehren Groban (guitar), Mike Pygmie (bass) and Greg Saenz (drums).

The album that won the 2019 Coachella Valley Music Award for ‘Best Album’ includes guest appearances from some of the desert’s most accredited musicians including Ronnie King, keys on There She Goes, Sean Wheeler, vocals on Repeater, Nick Oliveri, bass on Two Faced, John Garcia, harmony vocals on Two Faced and Mike Pygmie, drums on Never Was Enough, Fine, Two Faced and Vanilla. This may have been the last album from the classic line-up of Robbie Waldman (vocals and guitar), Damian Lautiero (bass and background vocals) and Jeff Bowman (drums and background vocals).