In the slash and burn culture that has dominated the 21st century, texting, sexting and snapchat have rendered intimacy almost obsolete. Music has followed suit. These days, songs are created and performed by committee. Take a listen to the current Top 20 songs and each one feels cobbled together, sometimes “featuring” one, two and in the case of Lil Wayne, six other artists.

Gone are the days when Frank Sinatra or Billie Holiday caressed a lyric, offering a nuanced interpretation of joy or new love or heartbreak. 25 years ago, even a band like R.E.M., a four-piece who came together through mutual affinity for Punk Rock, offered the heartfelt observation that “Everybody Hurts.”

If you are looking for a little more subtlety than “I Hate U, I Love You,” (seriously, you can’t make this shit up, that’s gnash featuring Olivia O’Brien, and it’s at #12), you are in luck. Norah Jones has a new album out.

It’s been almost 15 years since Norah Jones burst on the scene with her 2002 debut, “Come Away With Me.” With her smoky contralto and distinctive piano stylings she played a big part in resuscitating the Jazz genre and provided the venerable Jazz label Blue Note with the biggest selling album of their 80 year career.

Norah Jones was born Geetali Norah Shankar in the Bedford-Stuyvesant section of Brooklyn in 1979. Her mother, Sue Jones, was a concert promoter. Her dad, Ravi Shankar, was probably the most famous Indian musician in the world. A Pandit (master) Sitar player and composer of Hindustani Classical music, he shot to stardom in the ‘60s when Beatle George Harrison sought him out to learn the intricacies of the traditional East Indian instrument.

She knew her father briefly in New York, but Norah and her mom relocated to Grapevine, a suburb outside of Dallas, Texas, before she began kindergarten. She showed an early interest in music and began singing in her church choir at age five.  Originally, she drew inspiration from her mother’s record collection which included Etta James, Aretha Franklin and Billie Holiday, along with Broadway original cast albums like “Cats” and “West Side Story.”

Norah spent her high school years at Booker T. Washington School For Performing And Visual Arts. Already an accomplished pianist, she began exploring a newfound passion for Jazz. On her 16th birthday she made her solo debut singing and playing during an open mic at a local coffeehouse.

After graduating high school she attended University Of North Texas, studying piano and honing her chops performing at a restaurant on the weekends. At this point, she became reacquainted with her famous father, she also became friends with future collaborator Jesse Harris. He encouraged her to relocate to New York and pursue her goal of becoming a professional musician.

She made the leap in 1999, working in restaurants by day and performing in downtown clubs at night. Although she was excited to finally be part of a scene, she was also fiercely homesick. She combated that by listening to Texas musicians like Townes Van Zandt and Willie Nelson. On the eve of her 21st birthday she was offered a contract with Blue Note Records.

The storied Jazz label was established in 1939 and introduced the world to a plethora of Jazz idioms: Boogie Woogie, Modern Jazz, Hard Bop, Free Jazz and Be Bop, to name a few. Blue Note provided a launching pad for pioneers like Sidney Bechet, Art Blakey, Donald Byrd, Miles Davis, Dexter Gordon, Herbie Hancock, Wayne Shorter, Horace Silver and Jimmy Smith. In the late ‘90s they had some success with vocalist Cassandra Wilson. Norah seemed like a perfect fit.

Even before she began recording her debut, Norah garnered advance buzz by adding her sultry vocals to two tracks on guitarist Charlie Hunter’s 2001 album, Songs From The Analog Playground. Tastemaker radio stations like KCRW in Los Angeles put the songs in heavy rotation.

Blue Note paired Norah with veteran producer Arif Mardin (Aretha Franklin, Dusty Springfield), as well as Craig Street (k.d. lang, Cassandra Wilson). Most of the songs on the debut were written by Norah, her boyfriend, bassist Lee Alexander, and old compadre, Jesse Harris. Come Away With Me was released in February, 2002.

A sharp synthesis of Jazz, Folk and Country, it slowly began to gain traction. Critical acclaim was nearly unanimous. It hit the Billboard charts at #139, and by January 2003 it made it to #1. A month later it swept the Grammies, winning eight rewards. Suddenly her music was everywhere. Backlash was swift and immediate. Her detractors nicknamed her “Snorah,” even lesser-known artists like Nellie McKay piled on by pointedly entitling her debut “Get Away From Me.”

The threat of over-saturation prompted Norah to slightly modify her style. Her sophomore album, Feels Like Home arrived exactly two years after her debut.

Reflecting her recent interest in Country and alt.country she included tracks from late progenitors like Townes Van Zandt and Gram Parsons alongside her own compositions.

Jesse Harris and Lee Alexander were still on board, but she received some high profile help from Dolly Parton and ex-Band bandmates Levon Helm and Garth Hudson. Reviews were positive (but not rapturous), sales were brisk, but Starbucks patrons and soccer moms were slightly flummoxed by Norah’s deliberate ramble down a Country road.

Since then, she has travelled her own path, collaborating with disparate artists like Ryan Adams, Foo Fighters, Outkast and Danger Mouse. She reactivated a side project, the Little Willies (featuring Lee Alexander, and old friend’s guitarist Jim Campilongo, drummer Dan Rieser and Richard Julien), putting them front and center. Over the course of two albums, their self-titled debut from 2006 and “For The Good Times” released in 2012, she took a backseat, splitting vocal duties with Richard, mixing favorite cover songs and originals.

As a solo artist she released Not Too Late in 2007 and The Fall in 2009, following her break-up with Lee Alexander. The former featured her trademark Folk-Country-Jazz mix. The latter seemed to rebel against everything that came before, the songs, mostly written on guitar instead of piano, seemed more personal and defied easy categorization.

Her fifth album, 2012’s ….Little Broken Hearts, kind of doubled down on that format. She enlisted Danger Mouse (Gnarls Barkley, Broken Bells, Black Keys), to produce. The result was her most Rock N Roll effort to date. The Jazzy chanteuse from 10 years before had morphed in an Indie-Rock high priestess.

In 2013, she took another left turn, sparking a collaboration with Green Day front-man Billie Joe Armstrong. Surprisingly, the pair revealed an affinity for Everly Brothers, offering a ragged, yet graceful recalibration of the duo’s seminal record Songs Our Daddy Taught Us.  A year later another side project received full focus. Puss n’ Boots is the Country trio Norah formed with Sasha Dobson and Catherine Popper. 2014 saw the release of their debut record, No Fools, No Fun. 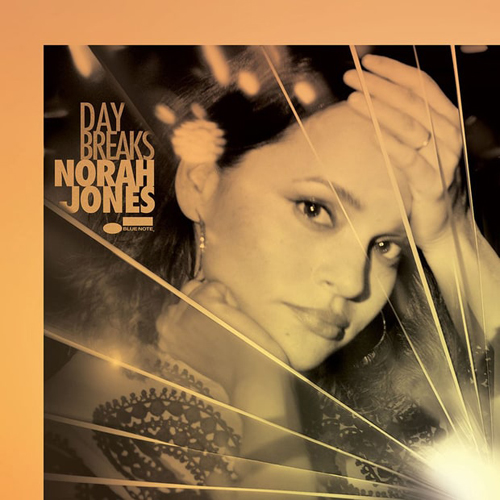 In between all that, she managed marry and  give birth to two kids before heading back into the studio to record her sixth solo effort, Day Breaks.  The album gets off to a quiescent start with “Burn.” Simultaneously intimate and expansive it opens with tentative piano, brushed percussion and roiling bass, Norah sketches out a post-coital tableau. ”The plot begins with you and me in dark lit rooms/Your cigarette cuts through, I wear it like perfume.” A sinuous sax and splashes of Hammond B3 cuts through the nicotine haze.

Norah Jones’ musical raison d’etre has generally been affairs of the heart but on both “Flipside” and “Tragedy,” the political has become personal. The former is powered by almost percussive piano, swirly organ and a propulsive rhythm. Despite the track’s hard charging danceability, the lyrics feel like a veiled exegesis of the Black Lives Matter movement.

“Hard times, fine lines, moments pass by and I cry/Rewind, step behind, it’s hard to find the flipside.” As the melody and instrumentation gather speed she offers this stinging indictment; “I can’t stand when you tell me to get back, if we’re all free then why does it seem we can’t just be?”

The latter is more sedate, a Gospel-inflected melody, it shares some musical DNA with Gilbert O’Sullivan’s lachrymose lament, “Alone Again, Naturally.” Anchored by her deft and liquid piano notes, the lyrics offer a devastating portrait of a man in the grip of alcoholism. Even sober at an older age, he realizes drinking has laid waste to his life; “He holds back the tears, thinkin’ of all the years that the bottle had him all tied down/So he’ll sit and have another round, singin’ Hallelujah ‘til he drowns.”

Like Aretha Franklin and Nina Simone, Norah is at her best when seated behind the piano. The album’s most stellar tracks benefit from the potent combination of her vocals weaving an aural tapestry with her unfettered keys.

When the stylus drops on “It’s A Wonderful Time For Love,” the finger-snappin’ syncopated cool recalls the epochal songs found on Miles Davis’ “Kind Of Blue,” or Dave Brubeck’s “Time Out.” Shimmery and incandescent, her playing is by turns, brisk and playful. She underscores her vocals with flippant filigrees and ascending scales.

On “Sleeping Wild” the languid melody, buttressed by rippling piano and Gypsy Jazz strings, feels as illicit as the romantic assignation hinted at by the cryptic lyrics.  Meanwhile, “Carry On” offers a soulful benediction to a former love. Sanctified piano notes dovetail nicely with a wash of Hammond B3 and a hiccough-y beat. Here Norah gets a vocal assist from Jazz giant, Dr. Lonnie Smith.

As usual, her choice of cover songs is eclectic and unexpected. She takes Neil Young’s slightly obscure (and fiercely autobiographical), “Don’t Be Denied,” gives it a distaff twist and makes it her own.  Layers of cascading piano, tart electric guitar riffs and woozy horns cocoon this relax-fit waltz. Locking into loping groove, the lyrics are plaintive and poignant, spinning a yarn concerning a child of divorce, (hmm, familiar).  After she discovers an innate musical talent she must navigate the rocky shoals of the music industry.

She also tackles Horace Silver’s Jazz standard, “Peace.” Norah recorded a different version of the song that popped up on a multi-artist Yuletide collection entitled “A Very Special Acoustic Christmas.” Here, the simple but evocative tune blends a series of resolved piano chords and with an aching soprano sax solo from Wayne Shorter.

Other interesting songs include the gossamer elegance of “And Then There Was You” and brittle epiphany of the title track. The album closes with the delicate beauty of Duke Ellington’s “Fleurette Africaine (African Flower).” Moody and mesmerizing the song offers a vivid mise en scene between soprano sax, acoustic bass, drums, piano and Norah’s wordless vocalese.

“Day Breaks” was recorded in New York, produced by Norah and Eli Wolf. It features a core band of Jazz stalwarts including  drummer Brian Blade, bassist Michael Patitucci, guitarist Tony Scherr along with giants like Wayne Shorter on saxophone and Dr. Lonnie Smith on Hammond B3 organ.

Although Norah is hesitant to characterize the album as a return to her roots, it hews more closely to her debut than her recent musical experimentations. Old fans will definitely be pleased.  She doesn’t see it as a throwback, but a continued evolution. The world clearly agrees, her album debuted at #2 in the Billboard Top 200.  Norah Jones music may not be timely, but it remains timeless.