By Robin E. Simmons
THE CONJURING 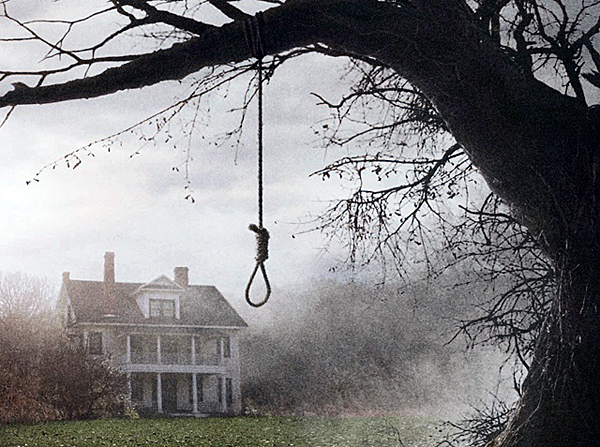 I always wondered if the real life ghost-hunters and freelance exorcists Ed and Lorraine Warren were in some way the cause of the hauntings they investigated and wrote about. I assume they made a comfortable living and found a degree of rewarding fame along the way.

That said, THE CONJURING, a movie adaptation of one of the Warren’s “cases,” is a terrifically unnerving, old-school ghost story that delivers it’s chills and scares without resorting to cheap gross-out, blood-drenched shots.

This purportedly true story has the paranormalists Warrens, here played nicely by Patrick Wilson and Vera Farmiga, investigating a hostile presence in a remote farmhouse. The focused direction by James Wan follows the clever script by Chad and Carey Hayes. The mounting sense of dread does not let up as the Warrens close in on a dangerous demonic entity with whom they seem ill equipped to do battle. Now playing.

Doomed before it even screened, and never previewed for the press, this gigantic $100 million plus misfire that dabbles with a blatant but tired re-mix of MIB and GHOSTBUSTERS, has one thing going for it: Jeff Bridges. His loose and loopy performance as Roy Pulsifer, a cop who rounds up departed souls, actually monstrous spirits cleverly disguised as “ordinary souls” who refuse to move on, is almost worth the price and tedium of sitting through this mess of a 3D supernatural action-adventure. Almost. Ryan Reynolds is partner in this dubious soul collecting assignment. The rules of this otherworldly story and how things function took a lot of explaining that is exhausting to keep in mind. And still, questions keep popping up for the still alert viewer. And there’s the unnecessary body switching. Is it meant as a joke? I’m pretty sure this is, or was, supposed to be a comedy. I did laugh at the cheap computer effects. As one might guess, life on our planet will not survive if this unlikely R.I.P.D. team cannot restore some kind of cosmic equilibrium and the sooner the better. The five-day forecast is not good. Now playing – but not for long.

WAR OF THE WORLDS: THE TRUE STORY 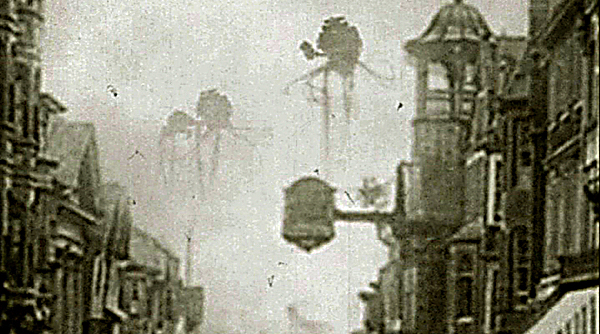 Finally a brave filmmaker uncovers the true story of the little-known Earth/Mars war of 1900 with some astonishing archival motion picture images interspersed with “recreations” that give a personal truth to the apocalyptic encounter with alien invaders. Much, if not all, of the public record has apparently been expunged, but a residue of the terror remains in our deepest sub-conscious. H. G. Wells tapped into it when he wrote his so-called fictionalized account of the invasion. And Orson Welles did it again with his infamous radio broadcast of 1938 that, to this day, some insist was a real newscast. Now, filmmaker Timothy Hines and producer Susan Goforth bring us the fuller story. They are to be commended for this ambitious cinematic account of an important historical event that we best not ignore. Vintage footage of journalist Bertie Wells, the last living eyewitness to the terrifying Martian invasion, adds immensely to the verisimilitude, immediacy and poignancy as he recounts the search for his missing wife in the midst of humankind’s struggles to survive. Pendragon. DVD. 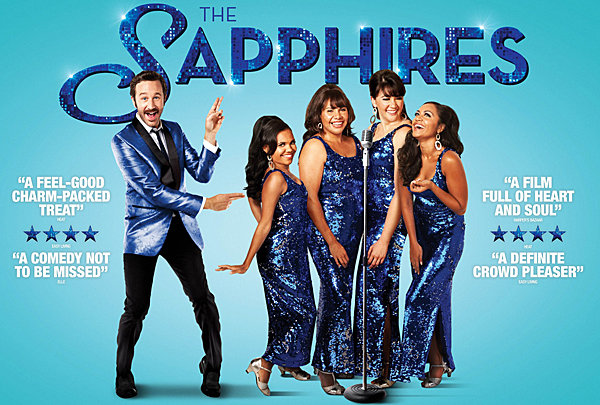 If you like feel-good movies, THE SAPPHIRES has a sweet, dramatic and fun vibe that lingers after the movie ends. Based on real events, the story, set in 1960s Australia, is about four Aboriginal girls from a far-flung mission who form a singing group. It should be noted that Aboriginals were hardly considered human but rather “flora or fauna” until 1967. The girls respond to an ad, and with a Scottish manager entertain U.S. soldiers in Vietnam in 1968 with soul-based harmonies and pop tunes. Along the way, they discover life and truths about war and love. The movie is great looking and the young women, all unknowns to me, who play the Sapphires are vibrant and engaging. But best of all, they have a wonderful natural harmony. Among the extras, there’s an interview with the real women who recall their memories of being the Sapphires. Anchor Bay Entertainment. Blu-ray. 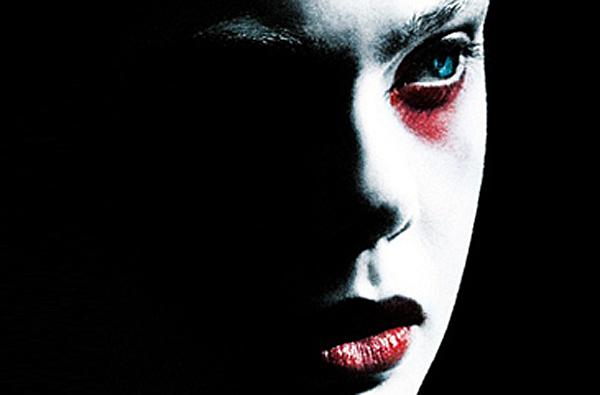 A writer hoping for a career revival stops in a small town as part of a book tour. When he gets involved in a murder mystery, he encounters a ghost named V. He has no idea what this means or if the ghost is part of the murder of a young girl, but he’s smart enough to realize he’s just been given a great story. Francis Ford Coppola’s bizarre film may be a very personal piece of experimental cinema that amuses only himself. Some interesting images and a playful undercurrent imbue his film with an attitude that’s hard to parse. Is it a dream that may have a multitude of meanings? Or maybe not. The story does have an actual ending that surprised me. The audience I saw this with was very divided. Some thought it was silly, while others found it sublime. I’m still thinking about it. 2oth Century Fox. Blu-ray 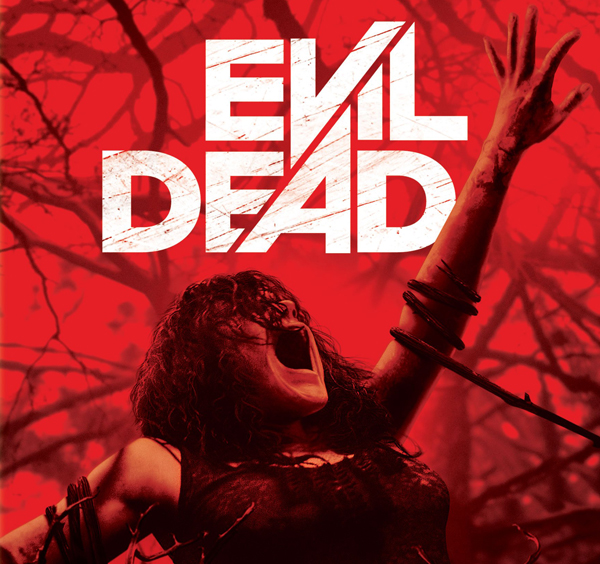 Fede Alvarez’s reboot of Sam Raimi’s 1981 cult masterpiece is devoid of humor and relentless in it’s stylized, ever spreading viscera. Similarly plotted as the original, we follow five young people in their who are 20s holed up in a remote cabin. When they find a Book of the Dead, they innocently (?) summon demons from the surrounding woods that, of course, possess the kids until only one remains with the will or strength to fight for life. This gore-fest is relentless, if that’s your thing. But make no mistake; this is nowhere near as frightening or satisfying as the blood-free THE CONJURING. Sony. Blu-ray. 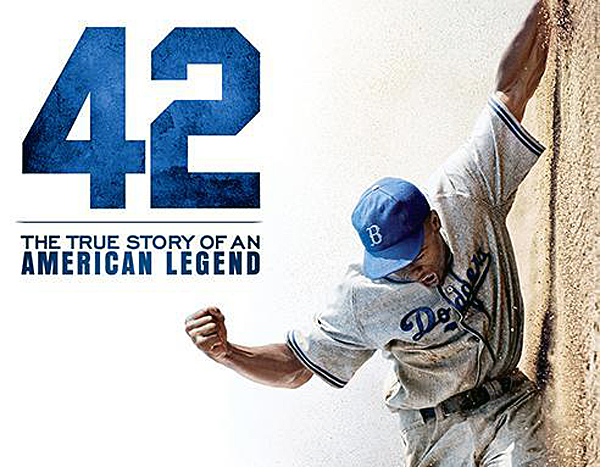 Writer-director Brian Helgeland’s 42 is a heartfelt and uplifting look back at the paradigm shifting, iconic events that put Jackie Robinson in the national spotlight and changed the way America looked at race, sports and itself. Based on recent events, race is still an issue, but in 1946 it was an even more intense catalyst that could and did trigger widespread hate that put many innocent lives at risk. Brooklyn Dodgers’ General Manager Branch Rickey changed everything when he crossed the color line, took a stand against prejudice and signed Jackie Robinson (a wonderful Chadwick Boseman). Maybe everything changed, but not necessarily for the better because it all rested on Robinson’s unknown ability to let his athletic skill alone do the talking. His courage to not retaliate made him another kind of hero. Robinson’s extraordinary skill and more so his grace, eventually won over his team, his enemies and gave America a new way to consider its soul. Warner Bros. Blu-ray.